When the “new planet” Eris was presented to the world on July 29, 2005, it did not yet have an official name and remained under its temporary designation 2003 UB313.

The discovery was the work of Michael Brown and his colleagues at the California Institute of Technology. Over the past years, they have been one of the leading groups of planetary hunters looking for small objects on the edge of the solar system and larger worlds orbiting other stars.

Brown was delighted that he was able to discover a planet, first to be introduced into the solar system after Pluto in 1930. However, the astronomical community as a whole had other ideas. The status of this celestial body was not fully determined until August 2006, when a new category of celestial objects, dwarf planets, was introduced to classify Eris, Pluto, and the largest asteroid Ceres.

The planet is very far from the Sun, which makes it difficult to study its physical parameters. In addition, measurements are greatly interfered with by Pluto’s atmosphere. But astronomers still managed to find out some secrets about the mysterious planet.

1. At the time of its discovery, Eris was an extremely faint object with a magnitude of 18.7. It was discovered very close to the outer edge of its orbit. Brown, Chadwick Trujillo, and David Rabinowitz simultaneously identified a star-like point of light in a series of three images taken over several hours on October 21, 2003.

2. Eris turned out to be a member of the so-called scattered disk – a population of trans-Neptunian objects, whose orbits are more inclined to the plane of the solar system than the objects of the classical Kuiper belt, where Pluto orbits.

3. Eris rotates so far from the Sun that it is difficult for scientists to measure its physical characteristics.

4. Estimates of Eris’ size have changed over time and the development of observational techniques. According to the latest data, the diameter of the planet is over 2360 km.

5. Eris approaches the Sun and moves away from it in the range from 5.7 to 14.5 billion km. Thus, one revolution around the star takes more than 560 Earth years.

6. In size, Eris is almost equal to Pluto, but its mass is almost 25% larger. The average density (2.5 kg / cm3) is roughly comparable to the rest of the Kuiper belt objects.

7. Despite its remoteness, Eris shines brighter than Pluto. Its apparent luster is more than 18 m, and its reflectivity (albedo) is 0.95, which is a high indicator.

8. Eris is not alone on her long, cold voyage around the sun. In September 2005, a satellite was discovered in orbit around it, now called Dysnomia (daughter of Eris).

9. Dysnomia makes a revolution around Eris in a little less than 16 days, being at a distance of about 37,370 km and rotating in an almost perfectly circular orbit.

10. Dysnomia, like most other satellites with extreme orbital tilt, revolves around Eris at a level above its equator, and the planet itself is tilted at an acute angle. 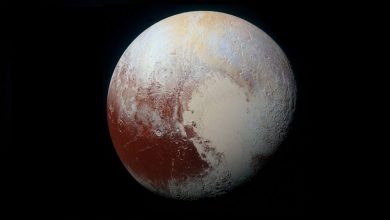 Ninety years Since Pluto Was Officially Named: Here’s What You Should Know