Newly discovered East Asian Neolithic genomes have unveiled a missing piece of human prehistory, namely that population movement played an essential role in the early genetic history of East Asians. Researchers led by Professor Fu Qiaomei, from the Institute of Vertebrate Paleontology and Paleoanthropology (IVPP) of the Chinese Academy of Sciences, used advanced DNA recovery techniques to retrieve ancient DNA from 25 individuals dating from 9,500 to 4,200 years and an individual dating back 300 years from North and South East Asia.

The recently sequenced DNA highlights an important period in the early history of East Asia: the transition from the hunter economy to agricultural economies reports the Chinese Academy of Sciences.

The researchers have revealed that one theory that aims to explain the population movement in Eastern Asia during the Neolithic tells us that during this period, a “second layer” of farmers replaced a “first layer” of hunter-gatherers in wide regions of East and Southeast Asia.

But what did experts specifically discover in the new study? We’ve resumed the paper in three primary sections that illustrate the importance of the discovery, and what it actually means.

Although the genetics of ancient humans in Southeast Asia, Siberia, and the Japanese archipelago have been well investigated in the past, until now, little was known about the genetics of ancient humans in northern and southern China. That’s why Professor Fu and her team set out to unveil parts of prehistory that remained shrouded in mystery. They discovered that East Asian Neolithic humans share the closest genetic relationship with current East Asians who belong to this “second layer.” The discoveries were published in the journal Science.

The study reveals that over 9,500 years ago, the primary ancestors that constitute the genetic makeup of East Asians today, were already present in mainland East Asia. Although more divergent ancestors can be found in Southeast Asia and the Japanese archipelago, as well as on the Chinese mainland, the Neolithic populations already exhibited genetic characteristics belonging to current East Asians.

In particular, this includes the earliest Neolithic South-East Asians dating back some 8,000 years from, which should have been what experts call the first “first layer” Asians. But this was not the case since  Professor Fu and her team demonstrated that this group shares a closer relationship with East Asians from the “second layer.” Therefore, the results of the current study are not suitable for a “two-layer” diffusion model in the East Asian Neolithic.

But not only that, the DNA samples have helped revealed important clues about the genetics of current populations and their ancestors. The new study offers conclusive evidence that early East Neolithic Asians were far more genetically separated from each other than today’s populations. In early Neolithic East Asia from 9,500 BC, a northern ancestry lived along the Yellow River, extending as far as the eastern steppes of Siberia. This ancestry was distinct from the one in southern ancestry that existed along the coast of southern mainland China, and the islands of the Taiwan Strait from around 8,400 BC.

Today, most populations in East Asia are not clearly separated into two distinct groups. Present-day East Asian Asians, both North, and South share a closer genetic relationship with Neolithic North-East Asian along the Yellow River than Neolithic South East Asia on the southern coast of China.

Other analyzes show that they are almost all a mix of northern and southern ancestry from eastern Neolithic Asia, with northern ancestry playing a more substantial role. Population movement, particularly from the north along the Yellow River to the south, was a prominent part of post-Neolithic East Asian prehistory.

The ancestors of the south, although less represented in the East Asian continent today, had a great influence in other regions. The current inhabitants of Austronesia, who share a close genetic relationship with the current East Asian continent, but live on a wide swath of islands in Southeast Asia and the Southwest Pacific, show a remarkably close genetic relationship with the Neolithic populations from the southern Chinese coast. Archaeological artifacts dating back to the Middle Neolithic have long hinted at the connection between Austronesian islanders and populations in eastern mainland Asia.

Austronesian populations constitute the predominant ethnic group not only in Maritime Southeast Asia but also in Melanesia, Micronesia, Polynesia as well as Madagascar. It is believed that over 380,000,000 people living in these regions have an Austronesia Descent.

The genetic relationships discovered by Professor Fu and her team offer unequivocal evidence that suggests how modern-day Austronesian speakers originated from a Proto-Austronesian population that likely came from southern China over 8,400 years ago.

The prehistory clues revealed by the 26 ancient humans clearly speak of the profound impact that human transition and population mixing had on prehistorical societies, but they also reveal a continuity that can be traced back at least 9,500 years.

Experts revealed that Central Asian ancestry played no role in the formation of East Asian ancestry, and interbreeding occurred largely regionally between northern and southern populations throughout East Asia. The full list of ancestors that existed across the wider regions of East Asia during the Neolithic period is still unexplained, mostly because genome data has not been collected from many regions of inland continental Asia.

Nonetheless, coastal links between ancient populations in Siberia, Japan, China, and Southeast Asia suggest that as more ancient DNA is recovered and studied, complex history of population contact and mixing will be unveiled in East Asian human prehistory. 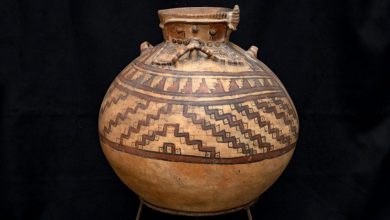