The exact age of ancient Egyptian pyramids remained open to debate despite claims from Egyptologists that the very first pyramids in Egypt were built no later than 4,700 years ago.

History books tell us that the first pyramid in Egypt was built during the Third Dynasty reign of Pharoah Djoser when his royal architect was tasked with building a six-stepped structure. The Great Pyramid of Giza was built a few generations later, and the last pyramid in Egypt around a thousand after.

However, despite these historical claims which are undoubtedly accepted as fact among experts, there are millions of people around the globe who are convinced that the Pyramids of Egypt are older than what Egyptologists are willing to accept.

Some people, in fact, believe that the pyramids of Egypt are more than 10,000 years old and that the majesty structures were not built by the ancient Egyptians, but by a civilization that predated them, and was lost during a cataclysmic global event. It is their belief that the pyramids were found by the Egyptians who restored and repaired many of them.

Nonetheless, history books tell us that around 4,700 years ago, when King Djoser ruled over Egypt, the first pyramid was birthed in Egypt. Revolutionary, history-changing, and striking, the Step Pyramid was a structure unlike any other. It changed Egyptian architecture forever. The Step pyramid, designed, planned and built by the royal vizier and architect Imhotep, is regarded as the earliest colossal stone building in Egypt, as well as the country’s most ancient large-scale cut stone construction.

The pyramid was not the only revolutionary achievement of Imhotep. In fact, the young architect did not only build a six-stepped stone pyramid, but he also managed to construct a supermassive pyramid complex which was nearly three times as large as the Old Kingdom town of Hierakonpolis. Such is the size of the vast pyramid complex built by Imhotep that we can observe it today even from space.

While the above-ground elements of Djoser’s pyramid complex at Saqqara are breathtaking and evidence of the royal government’s complete control of resources, what lies beneath the surface, directly under the pyramid, is worthy of every praise; Beneath the pyramid of Djoser lies a massive subterranean world composed of nearly 6 kilometers of chambers, magazines, tunnels, and rooms.

It remains a profound mystery as to how and why the builders of the pyramid felt they needed to construct such a massive subterranean world beneath the pyramid. What tools they made use of, and where the material that was excavated ended up remains one mystery we will probably never solve since there are no written texts of the Third Dynasty that mention the pyramid of Djoser—and its vast complex—ever being built.

Although the Step Pyramid of Djoser was revolutionary, and the Pharaohs of Egypt that ruled over Egypt after Djoser were left awestruck and tried replicating Djoser’s achievements, a few generations passed before Egypt saw the birth of another pyramid.

In fact, it wouldn’t be until the Fourth Dynasty that another pyramid was constructed in Egypt. This doesn’t mean that Egypt did not try building pyramids. It means that the Pharaohs that came after Djoser simply didn’t complete their monuments, whether because of a lack of time, resources, or knowledge. There are two unfinished pyramids at Saqqara that are believed to have been attempts of pyramids dating back to the Third Dynasty after Djoser.

The next Pyramid that was built was that of Sneferu at Meidum. It was most likely a stepped pyramid similar in design to that of Djoser. Egyptologists maintain that the Pyramid was redesigned and refitted during one time in history as the builders most likely tried turning a step pyramid into a smooth-sided one. This was an unsuccessful attempt, and evidence of that is the rubble that now surrounds the pyramid.

Nonetheless, Sneferu would build two more pyramids, and both of them catapulted Egyptian architecture onto another level.

The second pyramid was commissioned by Sneferu in Dahshur. There, the builders were tasked with building a smooth-sided pyramid. They started building the monument with an initial 54-degree inclination but noticed, halfway through the construction, that the pyramid became unstable-the builders were therefore forced to reduce the inclination at a shallower angle of 43 degrees. This change in construction is what gives the pyramid its obvious, bent appearance.

The change in the inclination of the pyramid may have been in response to the catastrophic collapse of the Meidum Pyramid, some experts have noticed. With a total volume of 1,237,040 cubic meters (43,685,655 cu ft) it was the largest pyramid that was built in Egypt around 2,600 BC. The construction of the Bent Pyramid gave pyramid-builders the necessary knowledge to eventually build the first successful smooth-sided pyramid.

The Red Pyramid is the largest of the three major pyramids at the royal necropolis of Dahshur, and the third-largest pyramid in Egypt with a height of 105 meters, and a total volume of 1,694,000 cubic meters (59,823,045 cu ft). It is believed that this striking pyramid—which retains some of its casing stones at its base—was completed in around 17 years. It is believed to have been completed around 2,590 BC. It is the first successful attempt at constructing a “true” smooth-sided pyramid.

The Red Pyramid of Dahshur is one of the view pyramids whose capstone or pyramidion has been uncovered and reconstructed. It is now located at the museum at Dahshur. Its exact purpose remains debated, as it has an angle of inclination that differs from that of the pyramid.

Sneferu’s three pyramids made sure that the king would be remembered as ancient Egypt’s greatest pyramid builder, and Sneferu’s son followed his father’s footsteps. According to Egyptologists, Sneferu’s heir to the throne—Khufu—built what would become the greatest pyramid in the history of Egypt.

Thought to have been constructed around 4,500 years ago, the Great Pyramid of Giza is the world’s most popular pyramid, despite the fact it isn’t the oldest or largest on Earth.

Despite this, the Great Pyramid of Giza remained the tallest manmade structure on the surface of the planet for more than 3,800 years. It is a behemoth structure and Egyptologists have calculated that its builders used an estimated 5.5 million tonnes of limestone, 8,000 tonnes of granite (imported from Aswan), and 500,000 tonnes of mortar to build the pyramid.

Measurements of the structure have revealed that the builders used more than 2.3 million blocks of stone to build the pyramid. With a total volume of 2,583,283 cubic meters (91,227,778 cu ft) it is Egypt’s largest pyramid, but not the world’s largest. (The world’s largest pyramid in terms of volume is the Great Pyramid of Cholula, located in present-day Mexico.)

Khufu’s pyramids is thought to have been completed in no more than 20 years. How exactly the pyramid was built remains one of the greatest mysteries in the history of ancient Egypt. There are no written records anywhere that speak of the construction methods, transportation method or techniques used by the ancients to build one of the most complex, aligned, and sophisticated pyramids in history. 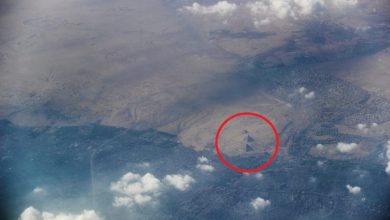 This Ancient City Predates The Great Pyramid by Around 8,000 Years, And You Probably Never Heard of It 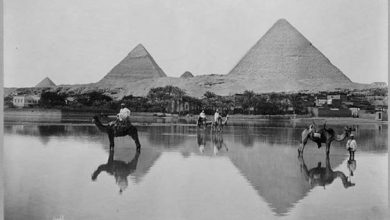 25 Rare Images of The Ancient Egypt’s Pyramids and Sphinx 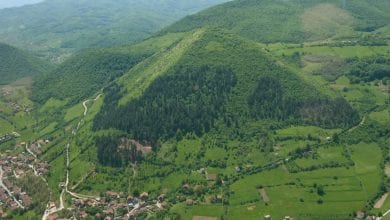