The North Star—located directly above our planet’s the North Pole—has served as a beacon in the night sky for centuries. Ancient civilizations throughout history observed the star(s) and even created monuments aligned to it. The North Star is also known as Polaris or the Polar Star.

Polaris, the bright sky above Earth’s North Pole, a beacon for travelers and cosmic guide for ancient civilizations, is acting up.

The star keeps “breaking” astronomical models of how stars are supposed to act. The more we learn about it, the more we cannot understand it in depth. The star system, which, due to its location, is difficult to observe, has proven to be a challenge for experts.

“…As we learn more, it is becoming clear that we understand less about the star,” a group of researchers recently wrote in a study published in the preprint server arXiv.

The biggest enigma surrounding Polaris is that astronomers can’t figure out how big and how distant the star is.

However, a group of astrophysicists may have an explanation for the strange behavior.

In addition to the fact that Polaris serves as a reference point in the sky for travelers without a compass and that pyramids may have been built on Earth aligned to it, Polaris is also Earth’s closest Cepheid.

A Cepheid is a type of star that pulses regularly in diameter and brightness. And Polaris is part of a binary system; its companion star is a fainter star known as Polaris B. From our point of view from Earth, we see Polaris B orbit its binary neighbor.

Astrophysicists have a few methods to calculate the mass, age, and distance of a star like Polaris.

One method is a stellar evolution model, said co-author of the new study, published in arXiv, Hilding R. Neilson, an astrophysicist at the University of Toronto.

Researchers can study the brightness, color, and frequency of the star’s pulsations and use that data to discover how big and bright it is and what stage of life it is at.

Once those details are solved, Neilson told Live Science that it is not difficult to find out how far away the star is; It’s pretty simple math once you know how bright the star really is and how dark it looks from Earth.

These models are especially accurate for Cepheids because their pulse rate is directly related to their brightness.

That makes it easy to calculate the distance to any of these stars.

Astronomers are so confident they understand the relationship that Cepheids have become critical tools for measuring distances across the cosmos.

However, there are other ways to study Polaris, and those methods don’t agree with stellar evolution models, which is somewhat a challenge for astronomers.

Astronomers call stars like Polaris an astrometric binary. “This means you can see its companion going around it, sort of like a circle being drawn around Polaris. And that takes about 26 years,” Neilson explained.

The researchers have not yet made detailed observations of a complete circuit by Polaris B.

But they have seen enough of the companion star in recent years to get a fairly detailed picture of what the orbit looks like.

With that information, you can apply Newton’s gravity laws to measure the masses of the two stars, Neilson said.

That information, combined with new “parallax” measurements from the Hubble Space Telescope, another way to calculate the distance to the star, leads to exact numbers about Polaris’ mass and distance.

Those measurements say it is approximately 3.45 times the sun’s mass, with a margin above or below 0.75 solar masses.

That’s much less than the mass obtained from stellar evolution models, which tells astronomers they should see a value of about seven times the sun’s mass.

However, Polaris is strange in other ways, according to the researchers.

Polaris B’s age calculations suggest that the star is much older than its older sister, which is unusual in a binary system.

The two stars are generally approximately the same age.

Neilson, along with Haley Blinn, a university student and researcher at the University of Toronto, generated a broad set of models of the North Star to see if they could reconcile all the known data on the system.

That’s not a surprise because Polaris is one of the most challenging stars in the sky to study, and it’s not making it easy for astronomers to crack its mysteries. Its position—just above Earth’s North Pole—means that the star is located outside the field of view of most telescopes on Earth.

The instruments that meet the requirements to study the star’s enigmatic properties were built to study much fainter and more distant stars. For those instruments, Polaris is just too bright.

“It’s blinding for them,” LiveScience explained.

One explanation that may help solve Polaris’ mysteries is that, according to Neilson and Blinn, the Polar system’s main star was billions of years ago two stars. These two stars eventually smashed into one another millions of years ago. Such a collision would rejuvenate the start, pumping in extra material, making the stars look younger, almost as if they had just gone through a kind of cosmic fountain of youth.

“This would be an unlikely scenario, but not impossible,” the researchers explained in their study.

Astronomers Suggest Different Dimensions May Exist in our Universe

Scientist Finds ‘Evidence’ of Another Universe Before This One 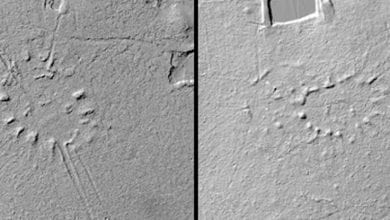 Ancient Sites and the Stars: Why did ancient civilizations align monuments with the stars?