Egypt is truly a land full of mysteries. Ancient Egypt’s history dates back thousands of years. Some of it remains hidden from sight, hidden deep beneath Egypt’s grains of golden sand.

Archaeologists excavating near the Kom Ombo Temple, not far from Aswan, have uncovered a fascinating ancient monument: another Sphinx statue.

According to the Egyptian Ministry of Antiquities, the Sphinx was discovered as archaeologists prepared the terrain for a groundwater reduction project.

While this statue is perhaps not as fascinating as the Great Sphinx of Giza, it still is of great importance as there aren’t many Sphinx statues in Egypt.

The Great Sphinx of Giza is by far one of the greatest ancient marvels, not only because of its size and intricate design but because the monument itself is shrouded in mystery.

The Sphinx uncovered ner Aswan most likely dates back to the Ptolemaic dynasty.

Aswan is the ancient city of Swenet, which was the frontier of Ancient Egypt in the south.

Supposedly the name of Swenett is derived from the deity with the same name.

This god Swenet was eventually identified as Ilitia by the Greeks and Ilithya by the Romans during ancient Egypt’s occupation.

The Egyptian name of the city appears in many Egyptian monuments and writings such as the Book of the Dead or the Turin Papyrus.

Aswan is also home to a massive stone quarry. The stone quarries of ancient Egypt located here were celebrated for their stone, and especially for the granitic rock called Syenite.

These stones produced at Aswan were used to create colossal statues, obelisks, and even the pyramids; besides, you can still see half-carved in the natural stone, the remains of work done by stonecutters who worked in the area more than 3000 years ago.

The Ministry explained that the Sphinx Statue was uncovered in the southeastern part of the Kom Ombo Temple, where archaeologists discovered two sandstone reliefs belonging to King Ptolemy V.

The Ptolemaic Dynasty ruled over Egypt for 275 years, from 305 to 30 BC. Interestingly,  they were the last dynasty of ancient Egypt. The temple where the buried sphinx was found was erected during the reign of the  Ptolemaic Dynasty.

The Riddle of the Sphinx: Evidence of Hidden Doorways Beneath Legendary Monument 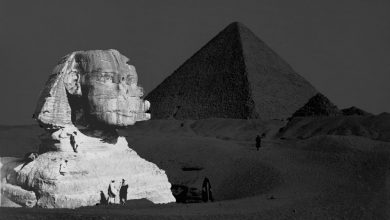 The Great Sphinx Is So Old It Was Restored For the First Time 3,500 Years Ago