A new mystery and new hopes came to Earth from the orbit of Mars: a Russian analyzer onboard the orbiter of the ExoMars mission discovered hydrogen chloride in the atmosphere of the red planet. This indicates previously unknown interactions between the surface of Mars and its atmosphere.

The results are based on measurements made by the Russian instrument “ACS” and the European “NOMAD” on board the “ExoMars Trace Gas Orbiter”.

Hydrogen Chloride in the Solar System

Previously, the presence of hydrogen chloride was known only in the atmospheres of two planets in the solar system – Earth and Venus. It was assumed that it exists on Mars, but experimentally it was not possible to find it.

The measurements were carried out here from April 2018 to March 2020 which equals a little bit more than one Martian year. Hydrogen chloride in the atmosphere of Mars was first recorded after the autumnal equinox in the northern hemisphere. Scientists have to figure out where it comes from and where it goes by analyzing a completely new chemical cycle.

Scientists speculate that gas formation can take several steps and requires several key ingredients. First, you need sodium chloride, this is a common salt leftover from evaporation processes. There is a lot of this stuff on Mars. Scientists believe that these are the remains of ancient salt lakes. When a dust storm hits the surface, sodium chloride is released into the atmosphere.

Remnants of water on Mars

Hydrogen chloride was first found during the global dust storm in 2018. It has been observed in both the northern and southern hemispheres, and researchers have found that it disappears surprisingly quickly with the end of seasonal dust whirlwinds.

It is also the first new gas discovered in the atmosphere of Mars after methane from the European mission “Mars Express” in 2004.

The second result, published yesterday, concerns the understanding of the mechanisms of how Mars lost its water – a process that is also related to the seasonal changes of the planet.

It is known for sure that in its distant past the Red Planet was covered by rivers, lakes, and oceans, and therefore testify to the many dried-up canals. Today, water is found mainly in the form of ice in polar caps or is buried beneath the surface. Mars continues to lose water even today, in the form of hydrogen and oxygen leaving the atmosphere.

The main mechanism by which scientists decipher the processes of water loss is by measuring the ratio between ordinary water and the so-called heavy water (in which one hydrogen atom in the water molecule is replaced by a deuterium atom, an isotope of hydrogen with an additional neutron).

The team, led by the American scientist, found significant changes in the ratio between deuterium (D) and hydrogen (H) with the rise in height and the change of seasons. Interestingly, when water evaporates, D / H increases six times more than when observed on Earth.

Data collected by ExoMars show that in recent years, Mars has seriously lost water during three recent events – during the global dust storm in 2018, during a brief but intense storm in January 2019, and the time of melting of the polar caps with the onset of the summer season.

In the coming months, the Russian-European mission ExoMars will coordinate with the American Maven Mission to further clarify the mechanisms for water loss.

I remind readers that “ExoMars Trace Gas Orbiter” arrived in orbit around Mars in the fall of 2016 and has been operating to this day. 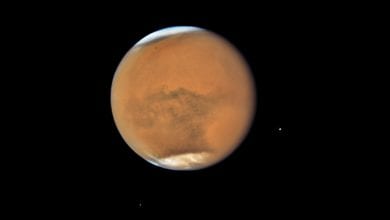 We Just Spotted a Weird Green Glow in Mars’ Atmosphere 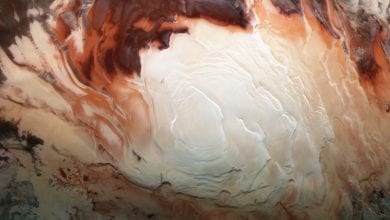 Melting Snow on Mars Spotted by Experts in Revolutionary Find 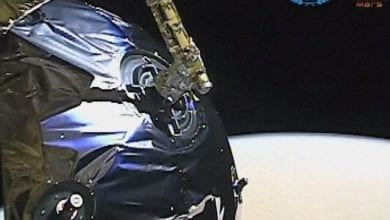