A vast prehistoric settlement, one of the largest of its kind in the region, has been discovered during archaeological excavations carried out as a preliminary to the construction of a road near modern Motza, a neighborhood on the western edge of Jerusalem, Israel.

The ancient city is being excavated ahead of a highway construction five kilometers from Jerusalem, the Times of Israel reported.

According to Dr. Hamoudi Khalaily and Dr. Jacob Vardi, excavation directors of Motza on behalf of the Antiquities Authority, “this is the first time a settlement of this magnitude has been discovered in Israel. At least 2,000 to 3,000 residents lived here, which in terms of magnitude, resembles a city today.”

Excavations on the site have revealed a number of large buildings, intricate tools, thousands of weapons including arrowheads, axes, sickles blades as well as knives.

The scientists also discovered a number of tools that were used for farming, which indicates a highly developed agricultural society that grew, among other things, wheat, barley, and a variety of beans.

The number of items recovered o the site proves that the ancient city was home to a developed society.

The discovery forces us to rethink the history of habitation in the region.

Previously, it was believed that this area was void of cities and settlements and that only the other bank of the Jordan River was home to large and complex sites.

Despite the fact that we don’t know the original name of this ancient city which happens to predate both the Pyramids and Stonehenge, archeological excavations which have been underway for 18 months, have already revealed evidence of a massive city which at its peak covered more than 100 acres of land.

Reports from Israel’s Antiquity authority revealed that this is the first time such a settlement, dating back to the Neolithic, was discovered in the region.

“It’s a game-changer, a site that will drastically shift what we know about the Neolithic era.”

“So far, it was believed that the Judea area was empty and that sites of that size existed only on the other bank of the Jordan river, or in the Northern Levant,” Jacob Vardi, co-director of the excavations at Motza revealed to the Times of Israel.

“Instead of an uninhabited area from that period, we have found a complex site, where varied economic means of subsistence existed, and all this, only several dozens of centimeters below the surface,” Vardi added.

The city’s beginning was most likely small and slow, around 10.500 years ago. But over a period of 1,500 years that followed, the city grew exponentially, becoming an important settlement in the region.

Archeologists maintain that the ancient city is “evidence of the settlement’s advanced level of planning.”

The complexity of the city was confirmed when archeologists discovered a number of burials in the city. According to reports, in the middlemost layer dating to 10,000 years ago, a tomb was discovered from around 6,000 B.C.

“In this tomb are two individuals — warriors — who were buried together with a dagger and a spearhead,” archaeologist Lauren Davis said.

Archeologists are working to preserve the site as best as they can, and every structure is going to be documented using 3D modeling.

“When we finish the excavation here,” said Vardi, “we will be able to continue to research the site in the laboratory,” adding that this is an unprecedented use of technology.”

Via
Times of Israel 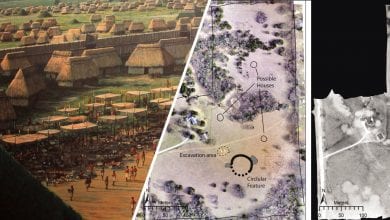 7 Common Misconceptions About The Great Sphinx of Giza