The Pleiades are among the most remarkable asterisms. You may be wondering about what exactly is an asterism –  a characteristic, easily recognizable group of stars, which may belong to one or more constellations, but it is not a constellation itself. Instead, it is an open cluster of stars.

The Pleiades star cluster is one of the few visible to the naked eye and certainly one of the most easily recognizable. It is dominated by young blue stars formed in the last 100 million years. According to modern theoretical models, the cluster will exist for another 250 million years, after which it will dissipate in interstellar space, under the pressure of the tidal forces of the spiral arms and gas-dust clouds in the Galaxy.

The Pleiades have been known to mankind since time immemorial. Archaeologists find rock paintings of this amazingly beautiful asterism in almost all corners of the world. As you can imagine, these drawings were made long before the beginning of our era.

In Greek myths, the Pleiades were seven nymphs, beautiful godlike creatures inhabiting the natural world. They were the daughters of the titan Atlas and the nymph Playon. One day, when the Seven Sisters were walking in the woods with their mother Playon, they saw the hunter Orion.

Orion fell in love with them and began to chase them. When the god Zeus saw that they were in danger, he turned them into stars in order to save them from Orion.

Of course, these myths have many variations and you may have heard a completely different version about the Pleiades. What’s important is that they were extremely important to ancient people as they determined the seasons by their position in the sky. As for modern science, the Pleiades is a constant object of study.

Is it possible that the myths about the Pleiades are 100,000 years old?

A recent study on the motion of the Pleiades has led to groundbreaking theories that could rewrite the history of the myths.

The research was conducted using the Gaia Space Telescope on two specific stars from the Pleiades – Pleione, and Atlas.

It was influenced by the curiosity behind the myths of the “Seven Sisters” (the star cluster). Why do cultures from all around the world refer to seven stars when the naked eye can clearly see only six.

What the studies revealed was that Pleione and Atlas are nowadays so close together that they appear as a single star in the sky.

Measuring the possible movement of the Pleiades from the past 100,000 years in return revealed that Pleione was much further from Atlas which would mean that the ancients were, in fact, seeing 7 stars instead of 6.

This led to the brand new theory suggesting that the myths we know about the Pleiades could have had existed in a different way more than 100,000 years ago.

What if the earliest humans around the time of the great migration from Africa had their own versions of these myths. It is clear that they had a much better picture of the night sky back then.

I believe that the ancient Greeks and all other civilizations in antiquity who shared their own stories about the Pleiades may have adopted them from earlier peoples. Given the nature of the myths that suggest there were Seven Sisters, it is possible that these stories go back 100,000 years when all seven were visible in the sky. 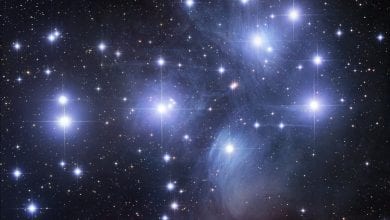 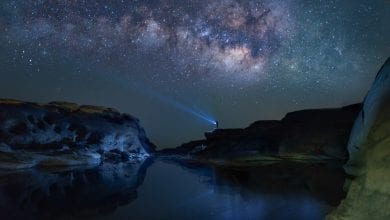