There are many stars in the sky, and there’s a saying that there are more stars than grains of sand on Earth. Although we won’t count any of the two, we can see many bright stars in the night sky. I have had the opportunity even to photograph some of these stars, and even Andromeda.

One of the brightest stars in the sky is a supergiant located in the Constellation of Orion called Betelgeuse. This massive star has given astronomers much to talk about for the past years.

Several studies and observations hinted at the possibility that the star might go supernova, as its brightness–and apparently shape– changed dramatically over the past few months.

Then, a new study popped up, which explained that the star’s dimming was likely caused by cosmic dust passing in front of the star.

Now, a new study offers unprecedented clues about Betelgeuse. Although previous studies suggested that Betelgeuse might be approaching the end of its life, scientists from the Australian National University say that this is not the case, ad we might need to wait at least another 100,000 years for the supergiant in Orion to die in a fiery explosion that will be visible from Earth.

According to lead author Dr. Meredith Joyce from ANU, not only will Betelgeuse continue shinning in the night sky, but the supergiant may actually be located much closer to Earth than what we believed until now.

Past observations had noticed that the star was behaving oddly, and astronomers had even observed two abnormal drops in brightness since late 2019; this is one of the remain reasons why scientists thought the star was going “kaboom.”

However, an international team of scientists has a different explanation.

As revealed by Dr. Joyce, “we know that a dust cloud caused Betelgeuse’s first dimming event. The second smaller event was probably caused by the star’s pulsation and not another dust cloud, as some had initially proposed.

To find out more about this event, scientists used hydrodynamic and seismic modeling which allowed them to get a better idea of what may have prompted Betelgeuse to pulsate.

Luckily for us, we will continue admiring Betelgeuse in the night sky for the foreseeable future as the star is currently “burning helium in its core at the moment, which means it’s nowhere near exploding.”

Recent estimates that Betelguese could explore in some 100,000 years.

The new study didn’t only reveal what caused the second dimming event of the supergiant, but it also helped scientists better understand the size of the star and how far away it was located from Earth. (when looking into the universe, we are essentially looking into the past because of the speed of light).

Co-author Dr. László Molnár from the Konkoly Observatory in Budapest revealed that no longer is Betelgeuse’s size such a mystery. Although previous estimates had proposed a size bigger than the orbit of Jupiter around the Sun, the new calculations indicate that the supergiant could extend no more than two-thirds of that, with a radius around 750 times of the sun.

This allowed scientists also to calculate its distances from Earth better.

“Once we had the physical size of the star, we were able to determine the distance from Earth. Our results show it’s a mere 530 light-years from us – 25 percent closer than previous thought,” explained Molnár.

Although this is much closer than initially thought, when the star goes supernova (when it explodes), it won’t cause any harm to Earth, although the vent will probably be a spectacular view observed from the Earth.

“It’s still a huge deal when a supernova goes off. And this is our closest candidate. It gives us a rare opportunity to study what happens to stars like this before they explode,” Dr. Joyce concluded.

The study detailing the new measurements of the size of Betelgeuse and its relative distance from Earth are explained in a study published in The Astrophysical Journal.

Our Planet Is Eating its Own Oceans 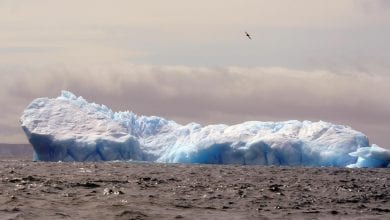