Are you ready for the “Great Conjunction,” a rare astronomical event that has not occurred since the 1600s? This cosmic event refers to the closest meeting between Jupiter, Saturn, and the Moon.

This year has offered us some pretty awesome astronomical events. October is set for a series of exceptional cosmic occurrences that make it a month many skygazers look forward to. You can read about October’s events here.

Personally, I am very much looking forward to observing Mars this month. The red planet. October will see Mars on perihelic opposition–the moment when the Earth is located between the Sun and another planet in the solar system that is aligned at the closest point of its orbit with respect to ours.

Mars is expected to make its closest approach to our planet on October 6, when the red planet is expected to be located just over 62 million kilometers away.

In March 2020, we were able to witness Mars in conjunction with Jupiter in the sky. Jupiter is expected to get close to Pluto, and the three will form a triple conjunction again in November 2020.

A few months ago, Moon, Jupiter, and Saturn (the two largest planets in the system) formed a triangle in the night skies, giving stargazers and astrophotographers an exceptional opportunity to observe and photographs the cosmic bodies. For example, I had the opportunity to photograph Jupiter and some of its moon’s using my Nikon P1000 camera, which was a stunning experience I can’t wait to repeat.

This stunning conjunction will repeat itself in December 2020, but this time in a much more extraordinary way, so much that it had not happened like that since 1623, and it is called the Great Conjunction.

On December 21, the conjunction between the Moon, Jupiter, and Saturn will again draw a perfect triangle in the sky. Still, on that occasion, there will be “the great conjunction”: when Jupiter and Saturn are closer than ever to each other, and such an intricate alignment has not occurred for around four centuries.

The planets’ intricate position and the moon will draw a gigantic triangle in the sky visible to the unaided eye, of course, if weather conditions permit it.

However, to appreciate the cosmic phenomenon in all its might, get yourself a telescope or binoculars and observe the planets as they draw a gigantic triangle in the night sky.

The three wise men, the Magi, who were Zoroastrian priests from present Iran, are said to have predicted the birth of a savior. The star of Bethlehem was attributed to the Great conjunction of Saturn and Jupiter.

Saturn’s Mysterious Hexagon May Finally Have an Explanation 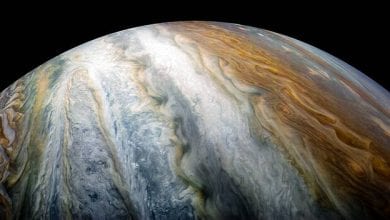 10 Mind-Boggling Photographs of Jupiter You Need To See

The Far Side of Our Moon Has a Strange Symmetry, Here is Why