An international team of researchers has discovered particles of extraterrestrial matter in East Antarctica, indicating that in the distant past, a massive meteor explosion happened over the continent. Scientists note that if such a celestial object fell on a large city, it would bring unbelievable devastation. However, it is clear that no such event would come upon us in the coming years.

Researchers from different countries found objects of extraterrestrial origin in the eastern part of Antarctica and suggested that this is a sign of an asteroid falling onto the continent. The further analysis only confirmed this theory. Scientists have found that the meteor explosion occurred about 430,000 years ago.

Shouldn’t there be a massive impact crater somewhere in Antarctica if a meteorite fell, you may ask? In the case of this event, there was no crater left since the object burned up in the atmosphere before hitting the surface of the continent.

This means that the object should be designated as a meteor and not a meteorite. The latter term is used only for objects that reach the surface, no matter the size of the crater. When the object burns entirely after entering the atmosphere, it is a meteor. And so, the remnants of this event that researchers found in Antarctica were melted. This also supports the assumption that the object exploded before reaching the ice shell.

The grains were found at the top of Walnumfjellet in the Sør Rondane Mountains. Geologists found only small particles, the size of which does not exceed 300 micrometers. After examining the remnants of the meteor through laser analysis and studying them under a microscope, experts stated that they contain large amounts of nickel. This is confirmation of the unearthly origin of the particles.

Also, according to scientists, these particles stayed in the ice for a long time and were released only after the ice melted.

The size of the cosmic body was 100-150 meters. It was larger than the Tunguska meteorite, which entered the atmosphere of our planet in 1908 and, in all likelihood, did not reach its surface either. In both events, there were meteor explosions but for Tunguska, we know the devastation it caused. For the 430,000-year-old one over Antarctica, there is no way to know the impact it had on the environment.

Such events are not harmful if they occur at great distances from civilization. However, according to Dr. van Ginneken, one of the lead researchers who made the discovery, the explosion of such a cosmic body over densely populated regions can cause huge casualties.

Scientists believe we need a clearer understanding of the frequency of such events and their potential harm. Such studies are very important, as they allow assessing the possibility of collisions of various celestial bodies with our planet in the future.

Fortunately, there is a low risk that such a meteor explosion would take place in the coming decades. Modern technology allows scientists to monitor all potentially dangerous asteroids and calculate their trajectory and potential path for years and decades ahead.

For example, let’s take asteroid Apophis which has been hitting the headlines as the most serious threat to our planet. Last week, astronomers from ESA and NASA officially removed it from the list of asteroids with a nonzero probability of threatening the Earth in the next 100 years.

This means that the biggest threat for our planet no longer exists. Scientists obviously have a lot more information now than ever before and we really shouldn’t worry about massive celestial objects hitting Earth or any meteor explosions above the surfaces like the one that was recently discovered.. 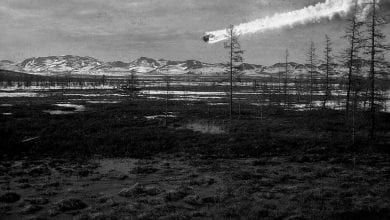