Home to a number of Pyramids and mastabas, it was there where ancient Egypt’s first pyramid was built, some 4,700 years ago. Located around 30 kilometers of modern-day Cairo, the entire necropolis covers an area of more than 7 by 1.5 kilometers.

It was precisely there at Saqqara where ancient Egyptian architecture was revolutionized with the sudden appearance of the first pyramid in Egypt.

Egyptologists maintain that Saqqara is the home of the oldest complete stone building complex in history, built during the Third Dynasty rule of Pharaoh Djoser. Scholars argue that more than 16 ancient Egyptian rulers were buried there within their respective pyramids that are in different states of preservation or dilapidation. 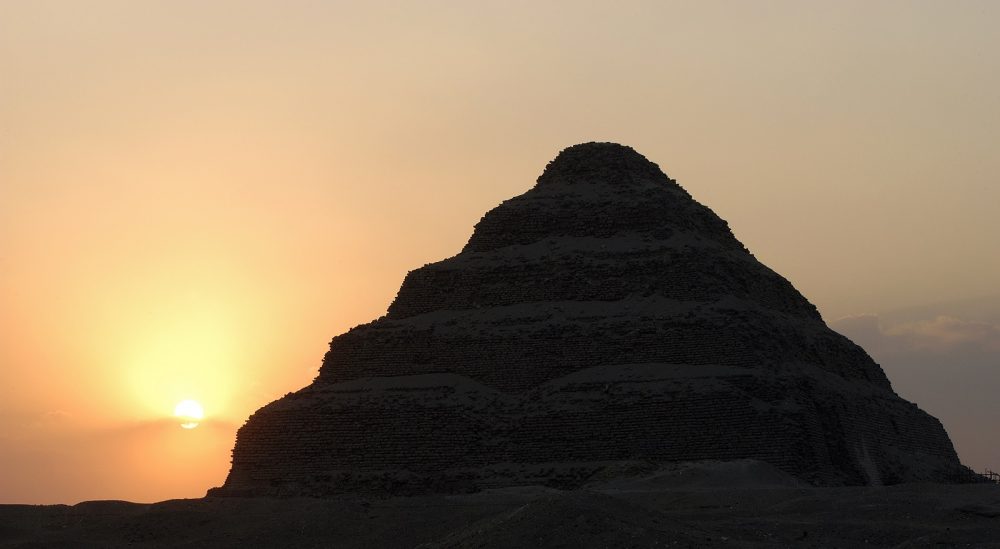 There, architect Imhotep, Djoser’s royal vizier designed and constructed the Step Pyramid, a 6-tier, 4-sided structure is the earliest colossal stone building in Egypt. The pyramid structure was envisioned as the central feature of a massive pyramid complex that was as impressive above the surface, as well as beneath it.

What Imhotep had designed together with the step pyramid was a massive temple complex that was massive both above and beneath the surface.

In fact, scholars have discovered a massive subterranean world beneath Djoser’s Step pyramid covering more than 5.7 kilometers. Beneath the temple complex, the ancient Egyptians had built an underground world comprised of hundreds of rooms, chambers, magazines, and tunnels.

The construction of the Step pyramid as well as the pyramid complex marked a notorious departure from previous ancient Egyptian architecture, announcing the arrival of evolved, more massive and durable structures.

The completion of Djoser’s pyramid complex is evidence that the state and Djoser’s royal government had vast control over resource both material and human, some 4,700 years ago.

Before the Step Pyramid appeared suddenly during Imhotep’s reign, the ancient Egyptians were sophisticated mastaba-builders. And one of these mastabas, specifically Mastaba 3038 built around 4,700 years ago, is believed to have served as a direct precedent to the Step Pyramid of Djoser.

In fact, the mastaba itself nearly became a pyramid by accident, had its builders not decided to leave one of its sides uncovered. The Mastaba was built within a 4-meter-deep rectangular pit and had mudbrick walls rising from its base to a height of six meters.

Three of the structure’s sides were extended and built out to create eight shallow steps rising at an angle of 49 degrees.

The Step Pyramid of Djoser is believed to have taken many elements from that particular Mastaba.

Eventually, Imhotep would design and built a Step pyramid with six steps, which were laid down in six different stages, as expected with an experimental structure that had never before been attempted by anyone.

Imhotep got everything right, and the Step Pyramid was created from the initial design of a square mastaba which was gradually enlarged.

What lies beneath the pyramid is a construction that equals the most complex of construction projects of antiquity.

Some 4600 years ago, ancient builders quarried out more than 5.7 kilometers of shafts, tunnels, and chambers creating an unmatched subterranean superstructure beneath the first pyramid of Egypt.

The inside of Djoser’s Pyramid as well as what is located underneath it is worth every praise.

Archeologists have found that Djoser’s above-ground components are just one miniature part of the story that the entire pyramid complex hides.

Beneath the Step pyramid extends a gigantic superstructure constructed on a scale before unknown to Egypt where the constructors quarried and removed more than 5.7 kilometers of rock in order to create shafts, tunnels, chambers, complex galleries, and magazines.

The superstructure underneath the Pyramid of Djoser is a sensation of its own.

The subterrene world created beneath Djoser’s Step pyramid is formed of complex passages and chambers and is widely acknowledged as one of the most complex and most extensive under any pyramid.

Pyramid Texts and the Pyramid of Unas

Long after Djoser, after many generations of ancient Egyptians Pharaohs came and went Pharaoh Unas would build a smooth-sided pyramid in the 24th century BC. King Unas was the final king of the Fifth ancient Egyptian Dynasty, and he built the smallest of the Old Kingdom Pyramids.

But although his pyramid was the smallest what scholars found inside it is a historic discovery.

The interior of the pyramid of Unas was inscribed with a series of hieroglyphs that later became identified as the Pyramid Texts: a series of spells fo the King’s afterlife that was incised in ancient times onto th walls of the subterranean chambers of its pyramid.

The Pyramid Texts would later be inscribed inside the tombs of many ancient Egyptian Pharaohs, including that of Pharoah Teti.

The Pyramid of Teti was a smooth-sided pyramid built in Saqqara and is the second known pyramid to contain pyramid texts. The pyramid was fist entered into by Gaston Masperi in 1882. The pyramid is badly damaged and ressebels nothing more than a large hill.

The Saqqara necropolis features some of the earliest burials of nobles that date back as far bask as the First Dynasty of ancient Egypt. Their burials were constructed at the northern side of the Saqqara Plateau. During the First Century, the royal burial grounds were not at Saqqara but at Abydos.

In addition to the countless tombs, pyramids, and temples, the Seapuem at Saqqara is one of the most notorious structures.

The Serapeum of Saqqara is located northwest of Djoser’s Step pyramid. According to mainstream scholars, it was the burial place of Apis Bulls, the sacred bulls though to have been incarnations of the ancient Egyptian god Ptah.

Inside the Serapeum are gallery chambers contain massive granite and diorite sarcophagi which weigh up to 70 tons each.

10 Things You Should Know About the Toro Muerto Petroglyphs

A 6-Million-Ton Ancient Wonder: The Enormous Great Pyramid of Egypt