The Great Pyramid of Giza is the most famous Egyptian Pyramid, not only because of its size and design but because it is shrouded in mystery. But so are all other pyramids in Egypt. Although we’ve studied them for centuries, many of their most precious secrets remain unanswered.

We still don’t know precisely how the pyramids were built, we don’t understand how some of those massive stones were transported across vast distances, and their purpose is—somewhat—still open for debate. Although Egyptologists maintain that Egypt’s pyramids were tombs, many other pyramids across the planet were perhaps everything other than tombs.

Egypt is home to around 120 pyramids in different states of preservation. Some of their most impressive pyramids remained standing despite being more than 4,500 years old. Others are unrecognizable and appear as no more than rubble.

According to Egyptologists, this Pyramid was commissioned by King Djoser of the Third Dynasty. Djoser instructed his young vizier and royal architect, Imhotep, to build a monument like no other, at one of ancient Egypt’s most sacred necropolises, Saqqara.

In addition to the Step Pyramid Complex, Saqqara is home to various other pyramids—attempted pyramids—as well as temples, mastabas, and other structures that served different purposes.

However, the Step Pyramid Complex stands out, not only because of the fact it is home to the first Pyramid of Egypt and the earliest colossal stone building in Egypt but because the entire complex is truly massive; measurements have revealed that the entire pyramid complex covers 15 ha (37 acres) and is about 2.5 times as large as the Old Kingdom town of Hierakonpolis.

The Step Pyramid at Saqqara was Egypt’s first revolutionary multi-ton monument, which drove the capabilities of ancient Egyptian building techniques to another, never-before-seen level. It kick-started a pyramidomania that would last over a thousand years, giving rise to some of the most impressive ancient monuments the world has ever seen.

Djoser’s Step Pyramid was a revolutionary monument that appeared all of a sudden, interrupting a long line of monuments built of lesser materials, such as the Mastaba Tomb.

Egyptologists see the enormous complex as the earliest large-scale cut stone construction in Egypt, although half-way around the world in present-day Peru, similar structures were built nearly at the same time.

The pyramid complex, although revolutionary, is believed to draw ideas from various precedents, the most notorious of which is another structure at Saqqara, dubbed Mastaba 3038, which would have essentially been a Step Pyramid had its builders not left one side uncovered. This mastaba is thought to have been built around 4,700 years ago.

What exactly Imhotep had in mind before laying down the first stone remains a mystery we are unable to answer since there are no written records or documents of any kind that date back to the Third Dynasty and specifically mention the pyramid construction. No blueprints have ever been found, although it is hard to believe that the builders achieved all of this without specific working planning set in place.

Nonetheless, there are certain things we do know: we know that the Step Pyramid was built in different stages and that it most likely took no more than 19 years to finish the Pyramid. This means that Djoser lived long enough to see his master plan come to life. The Step Pyramid is essentially a six-stepped structure, constructed in six distinct stages. This is, according to experts, a telltale sign which suggests the monument was indeed an experimental building, and the architects who worked on the project evolved the structure on the go.

It Is thought that the Step Pyramid started as a kind of morphed, square mastaba-like structure that was developed over the years. It was gradually enlarged first on all four sides, and then just on its eastern sides. These construction phases are known respectively as M1 and M2. The mastaba that made up the Pyramid is thought to have been built in two steps, first forming a four-stepped structure (P1) and then to form the six-stepped Pyramid we see today (P2), with a clearly defined rectangular base on an east to west axis.

Due to the fact that the initial mastaba had a square shape, Egyptologists believe that the monument was never meant to be a mastaba in the first place, since not one square mastaba has ever been discovered in Egypt. This has led experts to believe that although the Step Pyramid was a proto-pyramid and an experimental structure, the architects had envisioned something other than a mastaba.

Most of the stones that were used in the construction of the Step pyramid and its surrounding temples were quarried not far from the actual construction site. Although no documents exist that shed light on the construction techniques and transportation of material for the Pyramid, Egyptologists suggest the ancient Egyptians most likely used rollers that helped them transport some of the heaviest stones.

The subterranean labyrinth beneath the Pyramid

Although the above-ground elements of the Pyramid complex are breathtaking and worth of the gods, what lies beneath the Step Pyramid is even more so.

Many people are unfamiliar with the fact that, beneath the step pyramid at Saqqara, there is a massive underground labyrinth composed of countless rooms, chambers, magazines, and tunnels. In total, Egyptologists estimate that the ancient Egyptians excavated around 5.7 kilometers of space beneath the Step Pyramid.

This fact makes the step Pyramid of Djoser even more unique, as never have archaeologists discovered any other ancient Egyptian pyramid that has such a massive subterranean world beneath it. How the ancients managed to excavate such amount of material around 4,700 years ago remains a profound mystery.

The tunneled chambers beneath the Pyramid are a fascinating and unique architectural trait of early pyramid development in Egypt. Although its exact purpose continues to elude us, ti shows that early pyramid builders believed that the above-ground surface elements were only a small part of the story and that the Pyramid deserved an equally stunning aspect beneath the surface. The above-ground and below-ground elements were connected, and not just in an architectural sense, but a religious one as well; what is above, so is below.

Egyptologists believe that the underground labyrinth was a space that provided room not only for the King’s burial but also for his family members as well as the storage of goods and offerings that were needed for the Pharaoh’s afterlife.

Despite the importance of the subterranean labyrinth, its construction did not become standardized in later pyramid building. Nonetheless, as revealed by experts, a trend that would remain throughout the Old Kingdom was the entrance to the 28-meter shaft that was built on the north side of the Pyramid.

Egyptologists maintain that the subterranean chambers, rooms, magazines, and tunnels been Djoser’s Step Pyramid constitute the funerary apartment that mimicked the palace and would serve as the living place of the royal ka of the Pharoah.

The strange thing is that, although it is believed that the Step Pyramid was Djoser’s tomb, the Pharaoh’s mummy was never found. In fact, many of the artifacts that were recovered from the labyrinth beneath the Pyramid predate the Pharoah by several generations. Over 40,000 stone vessels were recovered in the various chambers beneath the Pyramid; these vessels were found to predate the King, and date back to earlier periods.

Although the Pharaoh’s mummy was not found inside the Pyramid, archeologists did recover the hipbone of a person beneath the Pyramid. Strangely, the hipbone was found to have belonged to a young female that lived various generations prior to Djoser.

10 Things You Should Know About Imhotep, The First Pyramid Architect 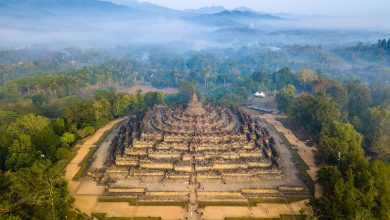 Unwritten Mystery: The Pyramids of Giza and the Missing Pharaoh Mummies