A true marvel of ancient engineering, for hundreds of years, have people wondered about how the ancients were able to erect such a behemoth structure thousands of years ago.

According to mainstream scholars, the Great Pyramid of Giza is the result of the cumulative effort of pyramid building in Egypt. Thought to have been commissioned by Pharaoh Khufu of the Fourth Dynasty, Egyptologists maintain that the pyramid was completed around 4,500 years ago, after a construction period that lasted around 20 years.

Just how it was built remains an enigma. Of all the problems concerning the pyramids, their construction is the most puzzling. Just as it is for us today, it was so hundreds of years ago.

Even the Roman writer Pliny the Elder, who condemned the pyramids as an “Idle and foolish exhibition of royal wealth” found much to wonder about the ancient structures.

Writing about their construction, Pliny wrote “…The most curious question is how the stones were raised to so great a height…”

Probably ever since people have wondered about how these colossal monuments were created. Using what technologies, what tools. The Great Pyramid of Giza was built using more than two and a quarter million stone blocks. Some of these stones weigh more than 15 tons, although on average around 2.5 tons.

It is simply mind-boggling to think about the staggering amount of work that was involved in building these structures, even if done with modern equipment and tools.

However, we must bear in mind that the ancients built the pyramids with the simplest methods available to them. Without the wheel and without the pully (the pully was unknown in Egypt before the Roman Period), it is argued that both in quarrying and building, the constructors made use of copper chisels and possibly iron tools, flint, quartz and possibly diorite pounders.

To transport the massive stones, they made use of wooden sleds and rollers. It remains unclear, however, how the ancient Egyptians moved stones weighing more than 20 tons without any more sophisticated technologies.

Whatever way it was achieved, Egyptologists suggest that moving massive blocks was not considered challenging for ancient Egyptians. Stones weighing more than 100 tons were transported, apparently with ease, thousands of years ago.

Therefore, it has been suggested that the process of quarrying, transporting and erecting the massive stones was such an ordinary matter to the ancient Egyptians that they did not consider the feat worthy of record.

Although we don’t know how all of this was achieved, as there are no written records that mention the construction phases of the Great Pyramid, scholars argue that the Great Pyramid of Giza alone was completed in either 30 or 20 years.

The only record of the time necessary to build a pyramid was left by Herodotus. He wrote that it took thirty years to construct the pyramid of Khufu. Ten years were needed to build the causeway and cut the substructures. Herodotus further tells that around 100,000 workers (not slaves) were used to build the pyramid. They were changed every three months.

Curiously, it is also Herodotus who gives us the only known detail about what the ancient Egyptians used to build the pyramids. According to Herodotus, the ancients made use of ancient machines that allowed them to build the pyramid. However, when saying machines, we are not referring to technological machines that our society possesses today, but rather simple “devices” that may have allowed a smoother construction process.

Bear in mind that the description offered by Herodotus comes already 2,000 years after the pyramid was built.

Whatever the means by which the pyramids were built, their purpose is another mystery worthy of study.

Although Egyptologists have argued for decades that he pyramids were essentially the eternal resting places of the pharaohs, there are reasons that have led many people to believe this is not so.

Primarily, we know of the existence of the so-called Provincial Pyramids of Egypt, ancient monuments–pyramids–that were definitely not used as tombs.

Seven pyramids exist in the provinces the southernmost of which is located on the island of Elephantine.

The purpose of the pyramids remains a total enigma. It has been suggested by some that they mark the homelands of the royal consorts, or that they were symbols of might and power of the pharaohs. So far, none of these pyramids has shown to have a burial chamber or ancillary buildings such as chapels. In other words, they were not tombs.

The Pyramids were tombs and nothing else, say Egyptologist. Nonetheless, the alleged burial chambers within these structures resemble anything but not tombs. Take for example the Great Pyramid of Giza and its three chambers. None of these three chambers are worthy of a king.

The Great Pyramid of Giza was built with around 2.3 million blocks of stone. Its average weight has been calculated at around 6.5 million tons.

If the structure was really built as a tomb, it is beyond impressive.

So, if the pyramid was built as a marvel of ancient engineering, and if the construction process was unmatched in ancient times, why is the most important part of the pyramid, the burial chamber, a room cold, undecorated, unworthy of a true king?

Building a structure like the Great Pyramid of Giza as a tomb, and then leaving the burial chamber undecorated, and cold is like building a Ferrari but deciding not to include an engine.

The alleged burial chamber inside the Great Pyramid is ugly, to say the least. Featuring only a granite box interpreted as s sarcophagus, the chamber has been empty since time immemorial.

But this strange feature is not unique to the Great pyramid. If we were to look at the pyramid of Khafre, the second-largest pyramid at the plateau, or the pyramid of Menkaure, the smallest of the three, we would find the same thing. Alleged burial chambers that were left undecorated, cold, unworthy of kings who built the impressive structures.

The alleged burial chambers of these Pharaohs were also left undecorated, cold, empty and unworthy of the mighty stone structures the chambers belong to.

If we were to look back at history, we would find that, surprisingly, neither the mummy of Djoser, the first pyramid builder has been found, nor has the mummy of Sneferu ever been discovered.

King Sneferu is thought to have built three pyramids, but his mummy was not found in any of them.

The same happens with Khufu.

The mummy of the Pharaoh who built Egypt’s most impressive pyramid has never been found.

The same thing is with Khafre, the builder of the second-largest pyramid at Giza. Menkaure’s mummy is also missing.

However, the same Egyptologists have revealed that the pyramids, since they were tombs, had intricate defense mechanism implemented within them, in order to prevent the looting of their interior.

Despite these defense mechanisms, tomb robbers somehow accessed the ancient structures and are thought to have looted everything they came across.

Inside Egypt’s Oldest Pyramid: 3 Exclusive Videos That Show the Heart of the Step Pyramid

How 3 Generations of Pharaohs Built the Most Massive Egyptian Pyramids 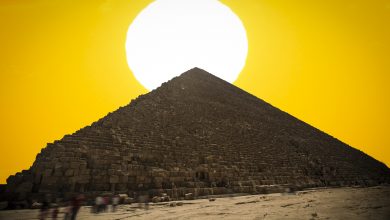 Here’s How Ancient Egypt’s Bent Pyramid Got its Bend

10 Things You Probably Didn’t Know About ‘Khufu’s Ship’, the Ancient Vessel Buried in front of the Pyramids