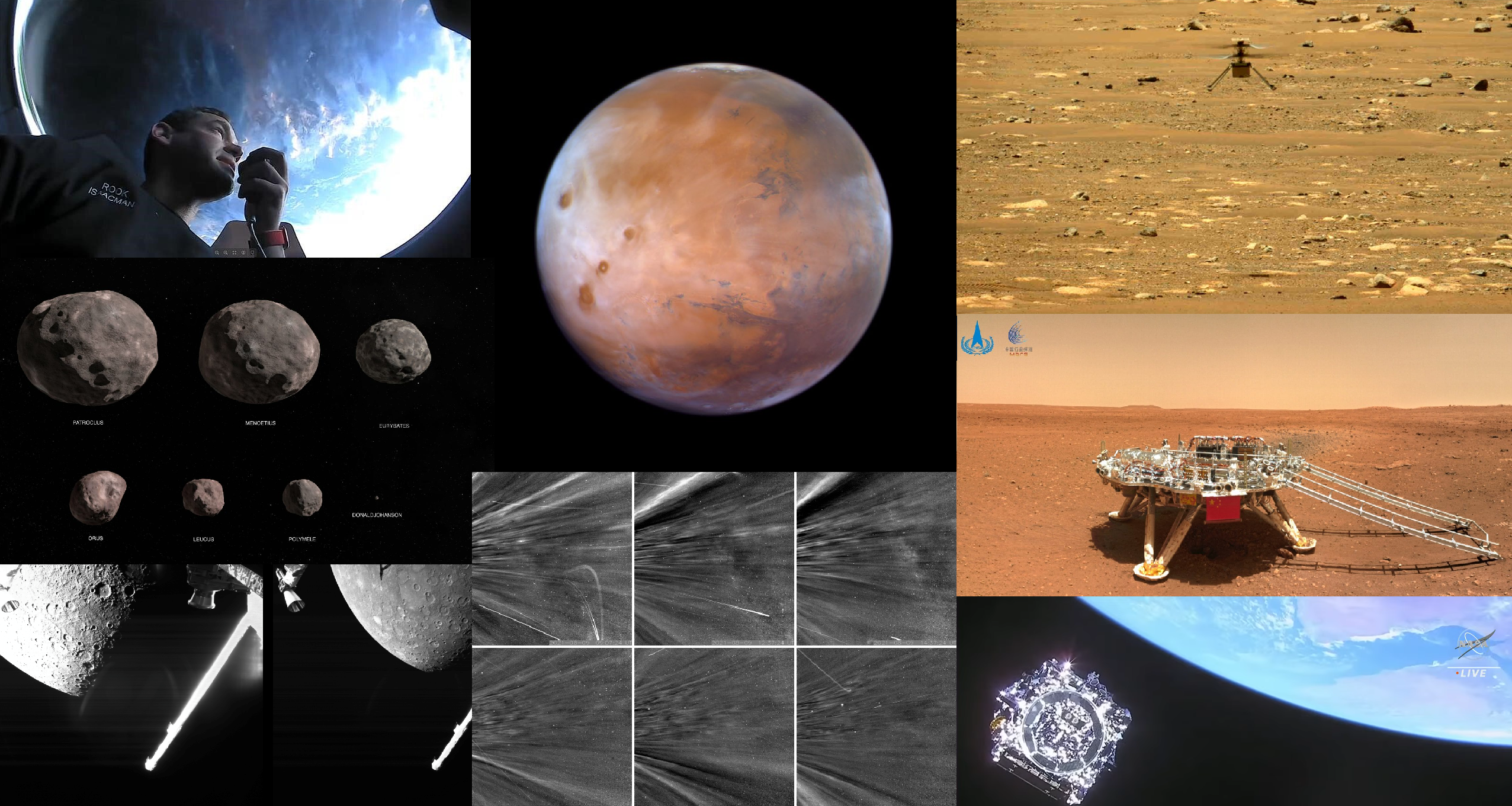 There is no doubt that in 2021, we witnessed rapid development in manned spaceflight, caused by the entry of private entrepreneurs in this field. Of course, we can remind you of the flights of Richard Branson and Jeff Bezos but cosmonautics is much more than manned spaceflights.

In this category, we include all the fascinating achievements of robotic missions in space in 2021, and there are quite a few significant examples.

Last year was a truly amazing space year, rightly described by Time magazine as “one of the most successful years in astronautics since the golden age of the ’60s and 70s.”

10. Record takeoffs and landings of the same stage of an orbital rocket

On May 9, a Falcon 9 rocket was launched with SpaceX Starlink satellites. The rocket was equipped with the first stage “B1051”, which had flown nine times so far. The tenth flight of the degree proved flawless again, and as expected, it made a soft landing on a floating platform in the Atlantic Ocean.

This was an important achievement of SpaceX – Elon Musk’s company has designed the first stages to be able to perform up to 10 flights with minimal support and up to 100 flights with more serious support. Many considered the entrepreneur’s attempts to achieve a return to be unfeasible, frivolous, or at least impractical. If we count December’s flight, it has now achieved 11 takeoffs and landings – a record in cosmonautics.

9. Humans traveled past the lowest Earth orbit for the first time since 2009

The truth is that for most of the space age, astronauts have rarely traveled far from our Earth. Almost all orbital expeditions in the history of mankind have been sent at an altitude of 300-450 kilometers above the earth’s surface.

The only exceptions are 15 manned expeditions – the only ones during which people have moved more than 500 kilometers from our planet. These include the nine flights to the moon under the Apollo program, the two flights of American high-orbiting Gemini spacecraft, and the four shuttle missions to the Hubble Space Telescope. The last of these shuttle expeditions was realized in 2009.

This is what makes “Inspiration4” such a significant achievement in cosmonautics – for the first time since 2009, four people (not professional astronauts, but tourists) reached a height of 590 kilometers. Thus, thanks to private enterprise, humanity is slowly beginning to break away from the prison of low Earth orbit.

On February 9, the UAE’s Al-Amal automatic interplanetary station entered orbit around the Red Planet. Never before has an Arab state had its own interplanetary space expedition. True – the UAE is implementing the Al-Amal project with serious help from the United States – in practice, the spacecraft, as well as its scientific instruments, were built in the laboratories of American universities. However, the initiative is led by the UAE Space Center Mohammed bin Rashid and is the greatest achievement in cosmonautics of the nation.

Al-Amal will study the secrets of the Martian atmosphere, and scientific results are expected to be of great importance in solving Earth’s problems, including air pollution and global warming.

7. A mission was sent to test the first anti-asteroid defense system

On November 24, a SpaceX rocket “Falcon 9” sent NASA’s DART automatic interplanetary station on its way to the Didymos-Dimorphos asteroid system. The purpose of the robotic expedition is to test for the first time systems for protection against dangerous asteroids.

Neither Didymos nor Dimorphos pose a threat to the Earth, but they are still a convenient training ground in case we face such a danger one day. As long as everything goes according to plan, in October 2022, Dimorphos will be hit by DART, and scientists will analyze whether the impact was enough to deflect the tiny asteroid from its orbit.

NASA’s Lucy mission was launched on October 16. The name of the expedition is not accidental – it is the same as the famous Australopithecus, whose discovery in 1974 proved crucial in understanding the evolution of hominids and the emergence of modern man.

But although late evolution is relatively well known to scientists, the evolution of the Solar System has countless mysteries. That’s why Lucy will study a total of 8 asteroids, debris from the formation of our planetary system. One of them belongs to the main asteroid belt, and seven are from the so-called Trojan asteroids near Jupiter – i.e. small celestial bodies that share Jupiter’s orbit and orbit the Sun in front of or behind the giant planet.

5. BepiColombo visited Mercury for the first time since 2015

Unfortunately, the planet closest to the Sun does not enjoy much attention from Earth researchers. Until October this year only two space expeditions had studied Mercury – the American Mariner 10 in 1974 and 1975 (short flights) and the American Messenger between 2011 and 2015 (orbital mission).

But on October 2 this year, the ESA-JAXA mission BepiColombo conducted its first of six Mercury flybys before finally entering orbit around the planet in 2025. During this flight, the first images of the Mercury surface since 2015 were taken and scientific data were obtained, which will be analyzed in the coming months by researchers.

Mercury’s next visit from BepiColombo is scheduled for June 23rd.

4. A spacecraft entered the atmosphere of the Sun for the first time

In 2021, the Parker Solar Probe entered the atmosphere of our Sun – an achievement in cosmonautics that, according to NASA, can be compared to the first landings on the Moon. Just as early spacecraft studied the lunar surface in a way that is impossible through remote sensing, Parker directly studied the constituents of the upper solar atmosphere – the corona.

On May 15, the landing craft of the robotic expedition Tianwen-1 with the Zhurong rover made a soft landing on the surface of the Red Planet. Next to China’s moon landings, this is the nation’s greatest achievement in cosmonautics to date.

Not only was this the first Chinese mission to land on the Martian surface, but for the first time, a non-US country managed to land a soft-running automatic station on Mars (not counting the ill-fated Soviet experience of 1971, when Mars 3 landed but did not remain operational.

Thus, the United States is no longer an absolute monopoly on research on the surface of Mars. We hope that in the coming months, Chinese scientists will enrich human knowledge about the planet and inform us about new, exciting discoveries!

2. The first helicopter on Mars

On February 18, the newest rover of the USA “Perseverence” landed on the Martian surface. But what set the mission apart from previous robotic expeditions was that this time an experimental helicopter called the Ingenuity was launched along with the rover.

After two months of preparing and testing the systems, the helicopter was finally ready to fly on April 19, and that day went down in the history of aviation and cosmonautics/astronautics forever.

Never before had an aircraft heavier than air made a controlled flight to another planet (although in the 1980s Soviet Vega missions sent free-floating balloons into the Venusian atmosphere). Since then, the helicopter has completed more than 18 flights and the program has been extended indefinitely.

1. The launch of the James Webb Space Telescope

Few believed we would live to see that moment. The development of NASA’s James Webb Space Telescope was accompanied by a number of technical problems and delays, lasting a quarter of a century. Each year, the telescope’s flight was delayed by another year.

But in 2021, work on it finally reached the final straight, and over Christmas, the telescope was launched safely with a European Ariane-5 rocket. To us, this is the greatest achievement in cosmonautics in 2021 – even greater than all the landings on Mars.

Few are aware of the difficulty of the task that the US space agency is trying to accomplish. It is no coincidence that the James Webb Telescope has been described as the successor to Hubble and will be able to unravel the mysteries of the birth of our universe. This will be done by studying the outermost space objects, but as the universe expands, these objects are shifted to the infrared region of the electromagnetic spectrum.

It is not easy to make a space telescope like the James Webb – to work in the infrared, its sensitive instruments must be protected from the sun’s heat. The huge shield, which was deployed on New Year’s Eve, is the approximate size of a tennis court (21,197 by 14,162 m). The shield is enough to protect those James Web tools that work in the near-infrared range – NIRCam, NIRSpec, FGS / NIRSS. 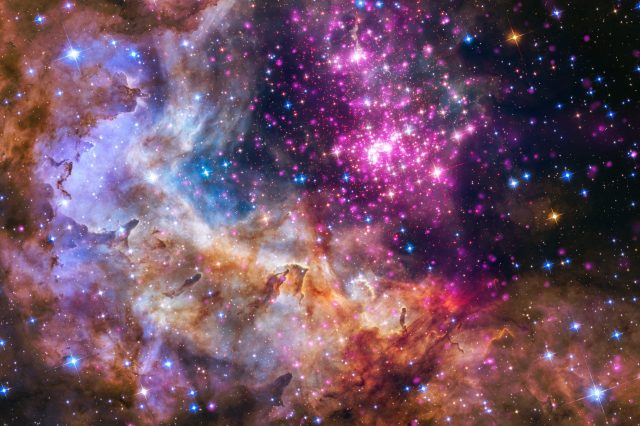 Life on Venus, Survival on the Moon, Organic Compounds on Mars–The Ten Most Important Space Discoveries of 2021