Egyptian vessels were used for various purposes such as fishing, trade, travel and battles.

Multiple objects were associated with divinity back in the olden days. Ancient Egyptians were quite religious people and included their gods in every single thing. The solar boats or solar barges are vessels that were used by various gods, including sun god, Ra.

One of the religious tales of Egypt states that Ra’s vessel, Atet, cruised across the sky every single day. Various other tales depict Ra’s journey throughout Egypt. He also travelled to the underworld in his boat. However, solar boats, in general, were used for various purposes in multiple dynasties. Some suggest that they were used as funerary vessels, while others claim that they carried pharaohs to their final destination.

We have accumulated ten interesting facts regarding the solar boats or barges of ancient Egypt. Let’s have a look at them, shall we?

1) According to Egyptian history, Ra’s boat existed in the spiritual kingdom. However, there were others which were constructed and maintained by human hands. Khufu’s solar boat is one of them.

2) Multiple gods and goddesses had their own ships. All of them were beautifully adorned and furnished as floating temples.

3) Various ships were buried with their respective kings. Moreover, archaeologists and experts found Khufu’s funerary boat near the pyramid of Giza.

4)The history and purpose of the ships are not accurately known. However, they were used by multiple pharaohs in the olden days. Various solar boats have been discovered as of yet; some of those are from the first dynasty of Egypt.

5) Osiris’ vessel was known as the Neshmet Barge, which was built by numerous humans. However, it originally belonged to one of the water gods called Nun. It is believed that the water god, Nun, gifted it to Osiris.

6) Egyptian vessels were used for various purposes such as fishing, trade, travel and battles. According to multiple egyptologists, people of the Old Kingdom of Egypt started using them for religious beliefs and practices.

7) The solar vessel of Khufu was buried under the pyramid of Giza. Moreover, they had to piece it together as it was broken. It is believed that it was meant to carry Khufu to his final destination.

8) Funerary boats were used to carry the dead in the olden days. They were mainly used in the funeral processions of the kings. The solar boats were believed to be magically charged and blessed by the ancient gods of Egypt.

9) In the Old and Middle Kingdoms of Egypt, solar boats were buried near royal chambers at the pyramid complexes.

10) Archaeologists and experts discovered a dozen boat graves in Abydos. The graves were found adjacent to the mortuary building of Pharaoh Khasekhemwy. Various experts claim that the aforementioned boat graves belong to the second dynasty of Egypt. 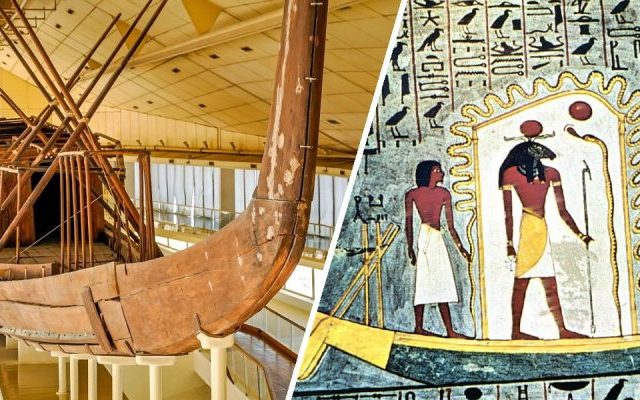