The clouds of Saturn appear as faint stripes and storms. The atmosphere’s pressure is powerful enough that it presses gas into a liquid form.

Saturn is known as the second-largest planet in our solar system. Moreover, it’s quite famous because of its rings system. According to various experts, Saturn has a set of seven massive rings. Each ring is named after an alphabet.

Moreover, planet Saturn is the most distant planet that can be observed with a naked eye. It is called a gas giant as it is mostly made up of hydrogen, helium and methane.

Following are ten interesting facts regarding Saturn. Let’s have a look at them, shall we?

1) Saturn appeared with the rest of the solar system about 4.5 billion years ago:

Scientists and experts believe that a gravity pull forced gas and dust to accumulate in one place, and that is how the gas giant was formed. Saturn fell into its present position in the outer solar system around 4 billion years ago; it hasn’t moved from its course ever since.

2) Saturn is known as the flattest planet in our solar system:

Saturn’s polar width is around 90% of its equatorial diameter; this is because of its low density and accelerated rotation. Saturn rotates on its axis once every 10 hours and 34 minutes.

3) Light takes around 1 hour and 29 minutes to move from Saturn to Earth:

As stated above, Saturn is the second-largest planet in the Solar System, having a radius of 58.232 km or 36.183 mi. It is about nine times larger than the Earth. The surface area of Saturn is approximately 83 times bigger than our planet, and the mass about 95 times higher.

4) Saturn does not have a true surface:

Planet Saturn is made up of hydrogen and helium. The planet has a solid core, but it’s mostly made up of water, ice and rock. It does not have an actual landmass. The center is quite similar to that of Jupiter. Moreover, the surface of the planet is quite hot and emits 2.5 times the amount of energy it generates into space than it receives from the Sun.

5) Saturn’s atmosphere is characterized by winds that reach up to 1,600 feet, 500 meters per second:

The clouds of Saturn appear as faint stripes and storms. The atmosphere’s pressure is powerful enough that it presses gas into a liquid form. Moreover, the temperature of Saturn’s upper atmosphere is about -175C. The planet is quite cold for a gas giant, while the surface of the planet is considerably hotter. The atmosphere consists of ammonia, ammonia hydrosulfide, and water.

6) Saturn has the most extensive rings in the solar system:

The rings of Saturn are made up of pieces of ice and small amounts of carbonaceous dust particles. The rings spread out more than 120,700 km from the planet.

According to NASA, Saturn has 82 moons. Approximately 53 are named, and the remaining ones are awaiting confirmation. Moreover, Saturn has some of the biggest moons in our solar system.

The area around Saturn’s north pole has a hexagonal-shaped pattern of clouds. Scientists and experts believe that this may be a wave pattern in the clouds. The planet also has a whirlpool over its south pole that matches a hurricane-like storm.

9) Four shuttles have visited Saturn in the past:

Pioneer 11, Voyager 1 and 2, and the Cassini-Huygens mission have all examined and studied the planet. Cassini-Huygens circled Saturn from July 2004 until September 2017.

Due to Saturn’s axial tilt of 26.73 degrees, the southern and northern regions are heated differently, causing seasonal temperature fluctuations. 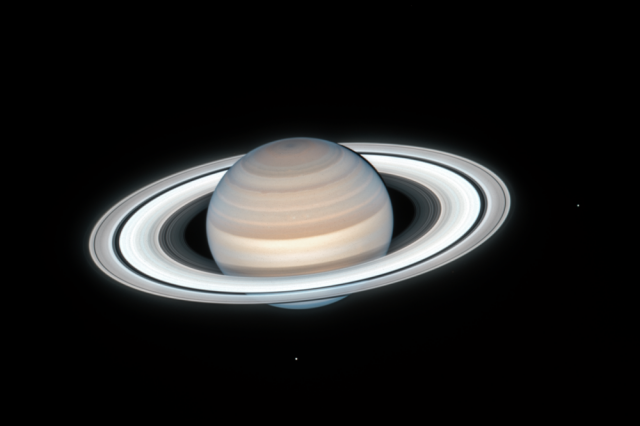