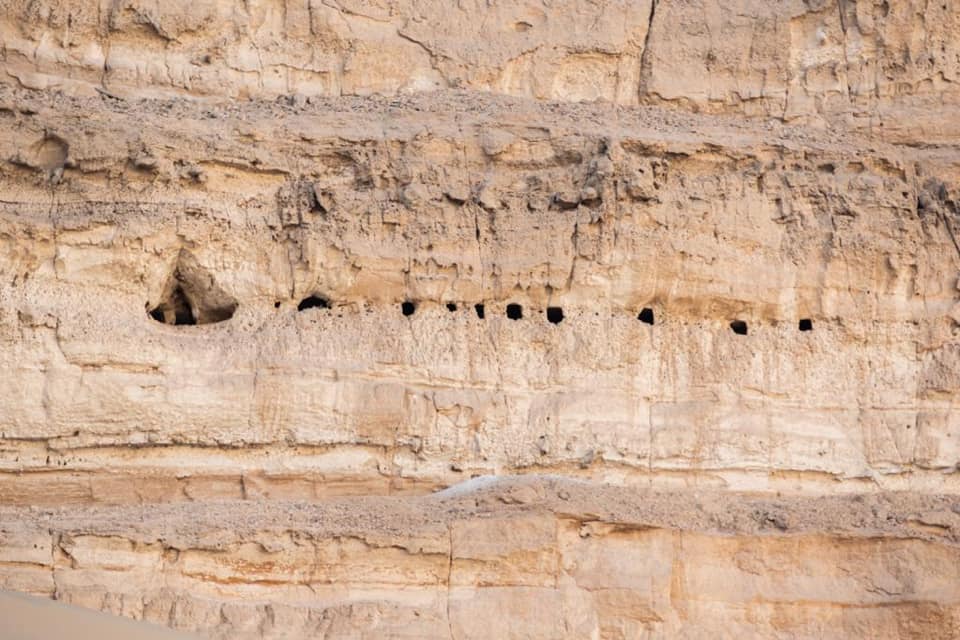 The exact purpose of the rock-cut chambers remains a mystery. However, given that they were excavated high on a cliff, and located not far from Abydos, it is believed that they were of great importance in ancient Egyptian times.

The Egyptian Ministry of Antiquities has reported the discovery of a series of strange rock-cut chambers located on a cliff near the ancient city of Abydos in Egypt. Although their exact purpose remains shrouded in mystery, it is believed that due to its proximity to a necropolis, they could have a religious significance.

A team from the archaeological survey mission operating in the desert plateau region, west of Abydos (Upper Egypt), revealed a group of openings distributed on the elevated side of a cliff. Dr. Mustafa Waziri, Secretary-General of the Supreme Council of Antiquities, explained that these openings are located in the area of the sacred valley south of the royal cemetery at Umm al-Qa’ab, and their antiquity would date back to the Ptolemaic era (323—30 BC).

Upon close examination, these entrances were found to lead to chambers cut into the rock, no more than 1.20 meters high, and most ranging from one to two rooms — though there are some with three and another group consisting of five rooms connected to each other through narrow slits cut through the rock walls that separate them.

Mohamed Abdel-Badi, head of the Upper Egypt Central Antiquities Department and head of the archeological mission, said these rooms are undecorated and are located on deep vertical wells attached to natural water tunnels.

Likewise, the expert revealed that many of them contain ceramic fragments, benches, terraces, a series of sunken circles or cut niches in the floor, in addition to a series of small holes in the walls directly under the ceiling, as well as holes or handles near from the entrance openings, where ropes were probably attached to.

The archeological mission also found a room with inscriptions containing the following names: Khuusu-n-Hor, his mother Amenirdis, and grandmother Nes-Hor.

Dr. Matthew Adams, from the Institute of Fine Arts of the University of New York and co-director of the North Abydos Mission, said that these cameras are not cemeteries since there are no indications that any of them have been used for burial.

However, their presence within the sacred valley south of the royal cemetery at Umm al-Qaab (which the ancient Egyptian thought was the path towards the otherworld) and its location on a high and hardly accessible level of the cliff, could indicate that these constructions were of great religious importance.