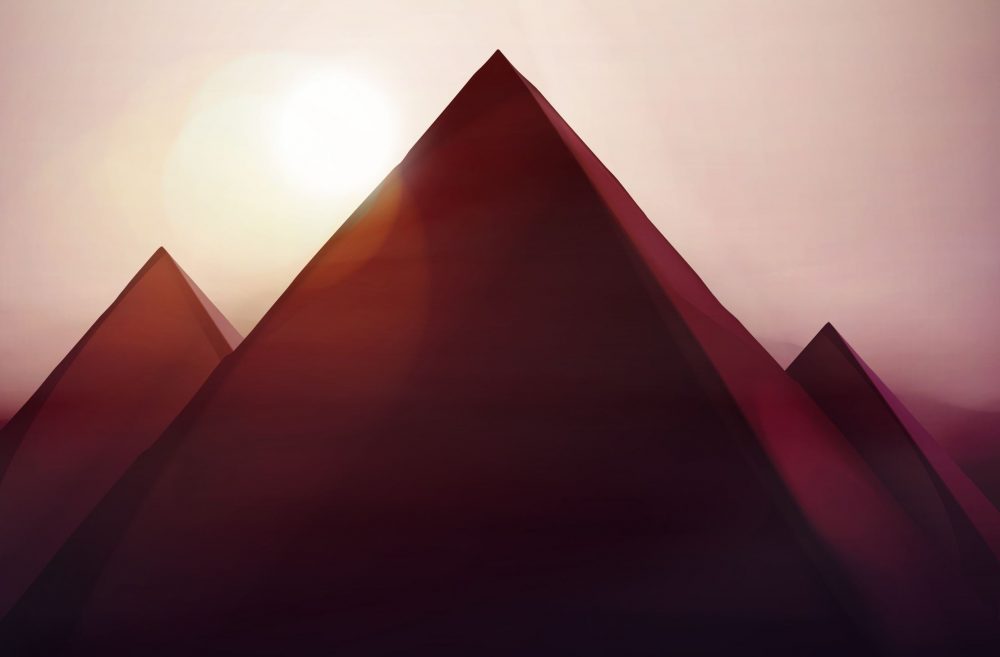 The Great Pyramid of Giza is the result of a long line of pyramid development and evolution spanning several ancient Egyptian generations.

Never before had a project of that magnitude been attempted in ancient Egypt, and after its completion, the ancient Egyptians would never manage to replicate the complexity and greatness of the pyramid. The Great Pyramid of Giza marked both the beginning and end of an era in ancient Egypt.

It marked the peak of pyramid building in Egypt, proving how well-developed the ancient Egyptian society was more than 4,500 years ago, but it also signaled a new era in temple building.

Transporting the stones required skilled labor, supervisors, and transportation means. It is believed that some of the largest stones used in the construction of the pyramid were transported via boat, from the quarries to the construction site. Researchers have calculated that 5.5 million tons of limestone, 8,000 tons of granite (from Aswan) and more than 500,000 tons of mortar were used to build the Great Pyramid in a period of 20 years.

The Great Pyramid, which covers an area of 13 acres was designed to align with the points of the compass and built with an estimated 2.3 million stone, having a total weight of around 6 million tons. How this was achieved by an ancient civilization more than 4,500 years ago remains a mystery.

According to archeologists, the stones are said to average in weight around 2.5 tons. Although smaller stone sexist towards the upper parts of the pyramid, the pyramid features casing stones at the base which may weigh as much as 15 tons. The massive granite beams roofing the King’s chamber inside the pyramid, and the stress-relieving chambers above it are believed to weigh from 50 to 80 tons.

This is because–strangely– although the Egyptians were excellent record keepers, there are no ancient texts that have been discovered in Egypt that mention how the pyramid was built.

This fact alone makes the entire pyramid even stranger.

The ancient Egyptians built a pyramid that would never be repeated. They designed it to be unique both in the exterior and interior. They used extremely advanced forms of math and physics to achieve all of this. And somehow, 4,500 years ago, the builders embedded the golden ratio within the pyramid.

One of the most impressive discoveries about the Pyramid was the day researchers identified a direct relationship between the Great Pyramid and the golden ratio. The Great Pyramid’s measurements have found to be with a small margin of error.

Researchers have explained that the relationship between the golden ratio and the Great Pyramid of Giza as coincidental since there is no knowledge of the golden ratio known from before the fifth century BC.

The Great Pyramid of Giza is unique in more ways than one, incomparable to any other pyramid in Egypt, and the world. The massive structure is the only eight-sided pyramid in Egypt. For 3,800 years after it was completed, it remained the tallest building in the world.

Its accuracy was unmatched. The base level of the great pyramid is level to within just 2.1 centimeters. The average deviation of the sides from the cardinal directions has been calculated to be 3′ 6” of arc. Scholars have found that the greatest difference in the length of the sides of the pyramid is 4.4 centimeters.

The pyramid was an incredible structure externally, but it was equally amazing internally.

Inside the pyramid, there are developments that are unique in pyramid evolution and are remarkable in the entire history of architecture.

Some experts argue that the three chambers within the pyramid represent changes in the initial design of the pyramid. However, there are clues which indicate that this may have been intentional and that the chamber and the passage systems were planned from day one.

The so-called air shafts of Khufu’s pyramid, which had nothing to do with conducting air to the pyramid may have been a symbolic implementation. It is noteworthy to mention that no other pyramid has been found to feature chambers and passages built so high up in the pyramid’s structure. Air shafts also exist in the so-called Queen’s Chamber, but strangely, they did not penetrate through the walls of the chamber.

The Great Pyramid of Giza is also unique because it is the only structure that features both ascending and descending passages.

But before all of this was planned, designed and eventually created, a long line of pyramids was built in ancient Egypt, and three of the pyramids played a huge role in the eventual construction of the Great Pyramid of Giza.

The Pyramid that would lay down the foundations for all future pyramids was built during the third dynasty of ancient Egypt when Pharaoh Djoser ruled over the land. The six-stepped pyramid is considered the earliest colossal stone building in Egypt.

The pyramid of Djoser, a kind of proto-pyramid, is also the earliest large-scale cut stone construction contemporary with the South American pyramids of Caral.

Djoser’s Step pyramid is thought to have originally stood around 62.5 meters.

The pyramid of Djoser draws ideas from several precedents, the most relevant of which is a mastaba built at Saqqara, cataloged as structure 3038, thought to have been built around 2,700 BC.

The step pyramid was built in six stages, as might be expected with an experimental structure, that had never before been attempted in Egypt. The Step Pyramid is thought to have been laid out as a square mastaba which was gradually enlarged, eventually resulting in the Step pyramid we see today.

The completion of the entire pyramid complex of Djoser marked the beginning of the pyramid-building age in ancient Egypt, and following generations of Pharaohs would revolutionize the architecture beyond recognition, expanding and creating more robust complexes.

The Pyramid of Djoser was succeeded by the Pyramid of Meidum, a structure that is thought to have never been finished as it collapsed during construction.

In addition to the Pyramid of Djoser, another pyramid that laid down the foundations for the building of the Great Pyramid of Giza is the pyramid built by Sneferu at Dahshur; the Bent Pyramid.

The Bent Pyramid of Sneferu represents a unique example of early pyramid building techniques in ancient Egypt. The pyramid was initially designed with a high degree of inclination. Given the high, 54-degree inclination, the pyramid’s structural integrity was compromised, and the builders opted to continue the upper section of the pyramid, above 45 meters, with a much shallower angle of 43 degrees.

It is this change in pyramid building that gives the structure its obvious bent appearance. The Bent Pyramid represents a transitional form between early steep-sided pyramids and smooth-sided pyramids.

Pyramid evolution under Sneferu advanced quickly. The Red Pyramid, or North Pyramid, was Sneferu’s third pyramid located just one kilometer away from the Bent Pyramid.

The North Pyramid is the largest of the three major pyramids at Dahshur and is the third-largest pyramid in Egypt after those of Khufu and Khafre.

This pyramid is revolutionary because ir represents the first successful ancient Egyptian attempt at building a true smooth-sided pyramid.

Built with the same shallow 43 degree as the upper part of the Bent Pyramid, the Red Pyramid of Sneferu is evidence that the pyramid builders were learning from pyramid to pyramid, redesigning and improving initial plans.

That’s why archeologists believe the design of the North Pyramid is a direct outcome of engineering crises experienced in earlier pyramids.

Eventually, with the successful construction of the North Pyramid, the foundations for bigger, more robust, and more complex pyramids were laid down. Not long after Sneferu, his son Khufu would commission what would become the greatest pyramid ancient Egypt had ever seen, the Great Pyramid of Giza which would not have been possible without the pyramids of Djoser, and Sneferu’s two pyramids at Dahshur.