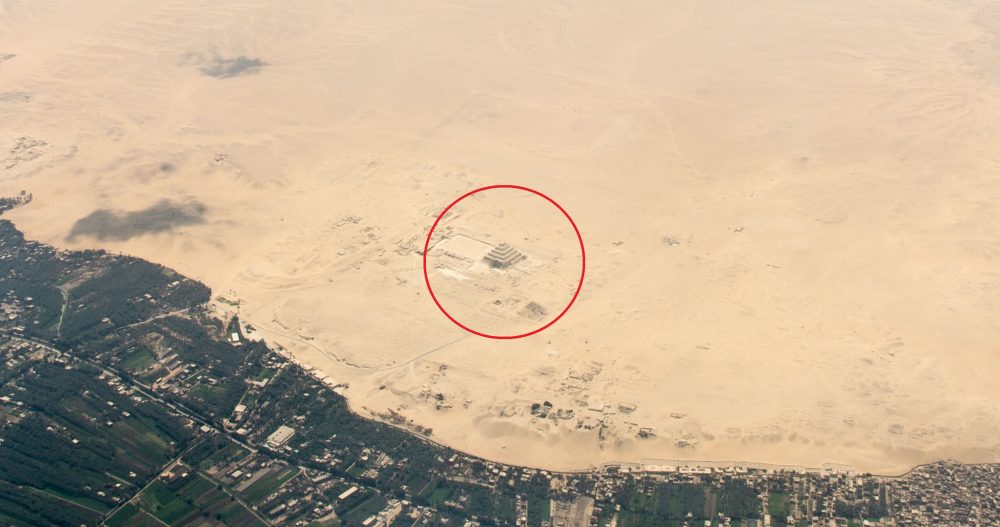 The oldest pyramid in Egypt is considered the earliest large-scale cut stone construction in the history of the land of the Pharaohs.

Experts argue that during the Third Dynasty of Egypt, a revolution took place in architecture.

King Djoser had among his many servants a young man called Imhotep. He was Djoser’s Royal vizier and architect. Early in his reign, Djoser had commissioned Imhotep to build a monument at a royal necropolis called Saqqara.

It wasn’t the first monument Djoser had commissioned, but it would become his most impressive and most important. Northwest of Memphis, the Step Pyramid of Djoser, was a revolutionary construction.

That’s because experts argue Imhotep most likely envisioned the monument not as a Step Pyramid in the beginning but more as a morphed mastaba.

After choosing the exact location where the monument would stand, Imhotep order the builders to dig into the bedrock at Saqqara and create a shaft inside the rock, 28 meters deep and seven meters square.

This excavation resulted in the first step towards creating the monument above the surface. At the bottom of the shaft, the builders were tasked with creating chambers and rooms.

Mainstream Egyptologists agree that the pyramid and its above-ground elements were built in several phases.

Egyptologist Jean-Philippe Lauer, the main excavator at Saqqara, has revealed that in total, there were six stages through which the pyramid was built: M1-M2-M3-P1-P1′-P2.

Assuming this theory is the correct one, it would suggest a major expansion took place at the construction site every three years. If we divide the six stages into 19 years that King Djoser is thought to have ruled over Egypt.

The Pyramid of Djoser is believed to have initially had the shape of a square mastaba, which was gradually enlarged. The first step involved expanding the structure on all four sides, and later additions saw the builders add just on the eastern side of the structure.

The mastaba of Djoser was constructed in two distinct phases. The first saw the structure adopt a four-stepped shape, and then a six-stepped structure which a rectangular base positioned on an east-west axis.

Since Djoser’s mastaba at Saqqara was initially square, any experts have theories that the monument was therefore never meant to be–in its final shape– a mastaba since there are no square mastabas in Egypt.

However, since there are no ancient texts, blueprints, or anything recorded when the monument was built, we can’t possibly know what the architect had in mind when he started building the structure.

For all we know, he may have desired to build the first square mastaba in Egypt but eventually opted for a much taller, superimposed structure.

He may also have initially planned to build the pyramid as he did.

However, experts who have excavated Saqqara and its famous pyramid argue that the structure evolved progressively. When the builders began transforming the square mastaba into the step pyramid, the structure underwent a major construction shift.

They built a crude core of rough stones and decided to case them in fine limestone with packing in between.

However, this phase had a major construction difference: in mastaba construction, the courses were laid horizontally, but for the pyramid layers, the builders opted for accretion layers that leaned inwards with stone blocks that were much bigger and of better quality.

The final construction phase saw the Step pyramid measure 140 meters from east to west and around 120 meters from north t south. The pyramid rose to the sky, standing 60 meters high. The entire pyramid of Djoser had a total volume of 330,400 cubic meters (11,667,966 cu ft).

The Step Pyramid of Djoser revolutionized architecture in ancient Egypt. The entire pyramid complex, its temples, and statues were surrounded by a massive limestone wall, 10.5 meters high and 1,645 meters long, encompassing a total area of around 15ha, comparable in size to a large town from the third millennium BC.

Djoser made sure to leave his imprint in history by erecting the pyramid complex. But although it might be expected that his successor would surpass the technical and artistic achievements, this was not the case. The monuments of Djoser, which stand proud at the edge of the western plateau overlooking the capital, inspired future kings of Egypt.

It might perhaps be expected that t long line of similar, Step Pyramid complexes would follow Djoser’s. Although many specific elements were taken by future generations, the rectangular step pyramid complex and the Step Pyramid did not endure in Egyptian history.

The pyramid of Pharaoh Sekhemkhet at Saqqara was an attempt to build another complex, but soon after the project began, it was abandoned.

The Layer Pyramid of Zawiyet el-Aryan is another third dynasty attempt to build a step pyramid complex and another that failed. Had this pyramid be completed, it would have risen in five steps to a height of no more than 45 meters.

In fact, it wasn’t until the Fourth Dynasty reign of King Sneferu that Egypt would see the birth of another pyramid, and in many ways, Meidum is the most mysterious of all great pyramids.

Embedded within the puzzles of the ancient pyramid and its nearby necropolis are events that transformed Archaic Egypt into the classic Old Kingdom Pyramid Age.

When Sneferu became king around 2575 BC (according to Manetho), Djoser’s was the only Pyramid that stood complete. Sneferu would eventually become the greatest pyramid-builder in Egyptian history. He constructed three impressive pyramids resulting in a total mass of stone that exceeds even that of his son and successor Khufu in Giza’s Great Pyramid.

Although Meidum and Dahshur saw the rise of Egypt’s transformed pyramids that eventually laid down the foundation for the construction of Egypt’s most impressive pyramid, Saqqara is where the magic lies.

Hidden beneath the royal Necropolis’s golden sands are many secrets that had remained hidden since before history was written.

One of the most confounding discoveries at Saqqara and not far from Djoser’s Step Pyramid are the remnants of two ancient pyramids.

The buried pyramid and the layer pyramid of Zawiyet el-Aryan are two ancient structures believed to have been commissioned by the pharaohs that succeeded Djoser. It is believed that both Sekhemkhet and Khaba wanted to build a complex just like that of Djoser. However, for reasons that remain unclear, neither the pyramid of Sekhemkhet nor that of Khaba was completed.

Sekhemkhet’s sarcophagus is believed to have been found beneath his uncompleted monument and is unique of all ancient sarcophagi in Egypt: it was made of a single piece of stone with a sliding door at one end. The sarcophagus was sealed with mortar. However, once opened by experts, it was found to be empty.

The Layer Pyramid is a greater mystery. Experts are unsure as to who had commissioned it. However, one of the vases of a nearby mastaba to the pyramid had the Horus name of Khaba inscribed on it, leading experts to believe the Layer Pyramid was his. Experts discovered no burial.

The third confounding discovery is directly beneath the Step Pyramid. And rather than what experts found, it’s what they didn’t find. Although the Step pyramid of Djoser was completed in his lifetime, and Egyptologists say the pyramids were tombs, once the underground chambers beneath the pyramid were accessed, archaeologists never found the mummified remains of Djoser.

It remains a profound mystery as to why the mummies of Djoser, Sekhemkhet, and Khaba were not discovered beneath their respective monuments. Another mystery is why Djoser chose to construct a massive 5.7-kilometer-long underground world beneath his pyramid.