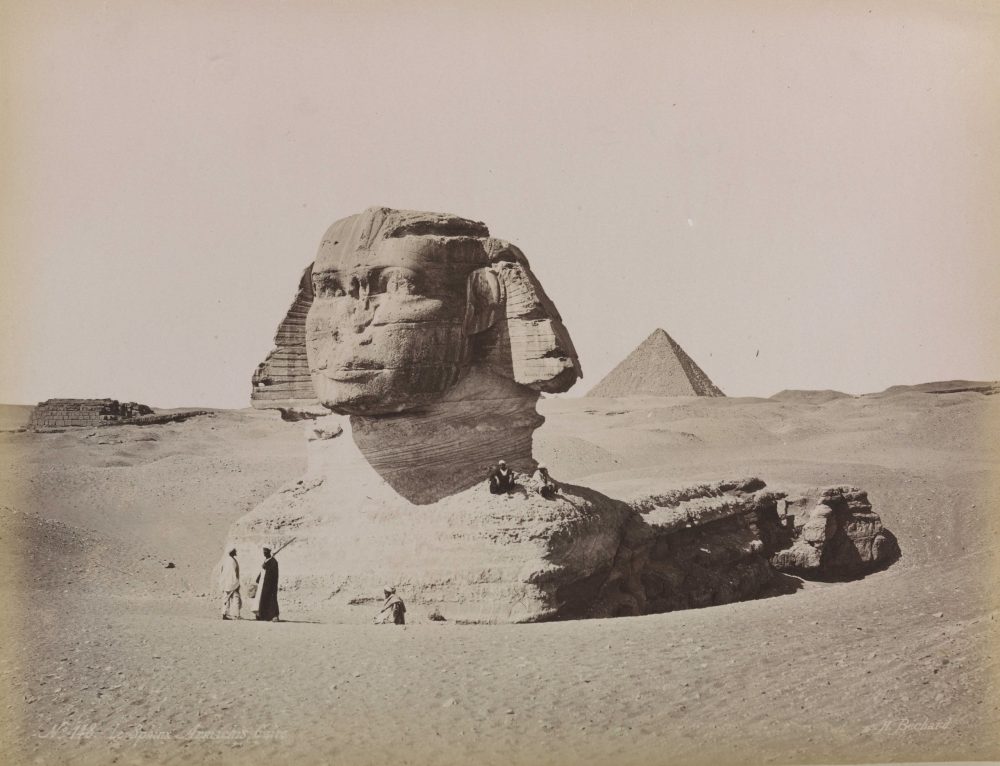 "This marvelous object [the Great Sphinx] was in existence in the days of Khafre, or Khephren, and it is probable that it is a very great deal older than his reign and that it dates from the end of the archaic period circa 2686 BC."

There are countless monuments scattered across the globe. Some of them are fairly recent and were built to commemorate important historical events. Other statues and monuments predate even written history and were built by our ancestors thousands of years ago for reasons that are not immediately clear.

But off all ancient monuments on Earth, there’s one that stands out from the rest.

Standing guard not far from the three main pyramids at Giza, the Great Sphinx is the guardian of the plateau. The majestic monument, shrouded in complete mystery, is the oldest, largest, and strangest monument ever carved by human hands. Between its incredible mythology, its obscure origins, and connections to realms beyond our own, the Great Sphinx is a treasure unlike any other.

Adjacent to the pyramids of Khufu, Khafre, and Menkaure, the Great Sphinx of Egypt was carved on the Nile River’s west bank, facing eastwards. Standing guard southeast of the pyramids, the majestic statue with the body of a lion and head of a human has been worshiped for thousands of years.

“There is scarcely a person in the civilized world who is unfamiliar with the form and features of the great man-headed lion that guards the eastern approach to the Giza pyramids.” —Ahmed Fakhry, The Pyramids, 1961.

There isn’t a single ancient document that describes the planning, design, and construction of neither one of the three main pyramids at Giza. And strangely, neither is there a single written record that tells us anything about Giza’s Great Sphinx. What we know about the majestic statue is derived from the countless survey, studies, and excavations that have been performed at and around the sphinx for centuries.

This is absolutely strange and unexpected. Cut from the Giza bedrock, the Great Sphinx measures 73 meters (240 ft) long from paw to tail, 20 meters (66 ft) high from the base to the top of the head, and 19 meters (62 ft) wide at its rear haunches. Just as its origin is shrouded in mystery, what exactly the Sphinx is meant to represent is equally mysterious. We know that by the time of Pharaoh Thutmose IV, the Sphinx was already ancient in Ancient Egypt.

It would be much easier to determine who or what the Sphinx represents if we had a defined chronology for the Sphinx. Nonetheless, scholars are keen to agree that the real Sphinx may bear some likeness to Pharaoh Khafre.

Despite these assertions, which are based on a lack of solid evidence, geologists argue that, based on the water erosion in and around the entire Sphinx enclosure, the monument must predate Khafre, a claim known as the Sphinx water erosion hypothesis, which puts forth the idea that the entire statue was once exposed to a large amount of water.

If the water erosion theory is proven correct, it could push back the entire history of the Giza plateau by several millennia. But as we have no written records mentioning the Sphinx in any aspect whatsoever, it’s hard to study its origin accurately.

A theory based on the “precipitation-induced weathering” on the upper sections of the Sphinx suggests that the last time there was sufficient precipitation in the region that may have left a mark on the Sphinx was between 9,000 and 7,000 BC, which means that the Sphinx could be between 11,000 and 9,000 years old, effectively redating the foundation of Dynastic Egypt.

What we do have from the Sphinx is a 1,400 BC inscription on a stele belonging to King Thutmose IV, where the massive statue is revered as being a solar deity called Hor-em-akhet. By the time Thutmose started excavating the Sphinx, the ancient Egyptians highly venerated the statue, which could be indicative of a previous phase of worship that predates Thutmose IV.

The interesting part is that by the 18th dynasty of ancient Egypt, the statue was older than old, already damaged, and covered in sand.

Anything before that is a complete and utter mystery.

No hieroglyphs, no ancient texts, nothing mentions the Sphinx in any context before the Stele was placed by Thutmose IV. There are no inscriptions anywhere that make reference to the gigantic statue in front of the pyramids. We don’t know its purpose when it was first carved. We don’t know who it is meant to depict. And we don’t know when it was carved nor who commissioned it.

What we do know about the Sphinx, a name given to the statue in classical antiquity around 2,000 years after it was constructed, is its geological composition, which then again doesn’t reveal wonders.

But it does tell us that the lowest parts of the Sphinx’s body are made of solid rock. The body of the monument, up to its neck, is shaped from softer layers that have been considerably damaged throughout time. We know that the layer in which the builders fashioned the head of the Sphinx is much more resistant.

Based on surveys done in the last few centuries, we know that there are various shafts within and below the body of the Sphinx, some of which may have been dug in recent antiquity by grave robbers and looters in search of hidden treasures.

But all of this makes it impossible for us to build an accurate timeframe and place the Sphinx in a specific period or Dynasty. Despite this, Egyptologists’ modern view is that the Sphinx was carved around 2,500 BC for Pharaoh Khafre, the man who built the second Pyramid at Giza.

But that is a claim based on nearly nonexistent evidence.

Medieval Egyptians gave the Sphinx various monikers, including “balhib” and “bilhaw,” although the monument was mostly known as Horem-Akhet, which translates as “Horus of the Horizon.”

The problem regarding the origin of the Sphinx and who exactly it represents is perfectly summed up by Egyptologist Selim Hassan, who, writing in 1949 on recent excavations surrounding the sphinx, explained:

Once believed to be an eternal god watching over the land of Pharaohs, the statue that endured thousands of years of history gave off to the golden sands of Egypt, throwing the imposing monolithic statue into a trance, as countless grains of sand covered its surface, preserving the statue for days to come.

People changed, religions fell and rose, and thousands of years went by as countless people stood in front of the Sphinx, wondering about its origin, purpose, and meaning, and paying respect to a statue of a giant lion with the head of a man whose story remained untold.

But even though history moved on, the Sphinx has remained a mystery written in stone. Although many have tried understanding its purpose, only a few have been able to learn the Sphinx is a messenger of ancient times, a statue that represents a history long gone whose origins are perhaps meant to never be told. Because we can’t read stone, we can’t understand the burden the Sphinx carries.

This mixture of myths, geological facts, and history has led to various views on the age of the sphinx. In 1992, Egyptologist Mark Lehner spoke about the Sphinx making somewhat contradictory statements regarding the Sphinx:

At the annual meeting of the American Association for the Advancement of Science, Lehner revealed that: “There is no direct way to date the Sphinx itself because the Sphinx is carved right out of a natural rock.”

In the Cambridge Archaeological Journal, Lehner wrote: “Although we are certain that the Sphinx dates to the Fourth Dynasty, we are confronted by a complete absence of Old Kingdom texts which mention it.”

And perhaps the above two contradictory claims made by Lehner tell us everything we need to know about the Sphinx and the conjecture surrounding the statue.

It is a fact that there are no definitive methods that allow accurate dating of rock-hewn monuments. Radiocarbon dating can’t date rock, as it is only applicable to organic material. But since the Sphinx is made entirely out of the rock, we can’t possibly date it with this method.

This brings us to Lehner’s second statement: we can date certain stone monuments with reasonable accuracy if there are texts, writings, and/or inscriptions that make reference to its construction/carving. For us to accurately date the Sphinx based on ancient writings, we would, therefore, need an inscription or text that dates back to the Fourth Dynasty, making reference to the Sphinx or attributing its existence to Khafre.

But as Lehner himself admits, there are no contemporary texts that refer to the Sphinx or mention its construction date.

Therefore, what we have at the Giza plateau is an ancient monument that so ancient that even the ancient Egyptians called it ancient. It was carved out of rock scientists today is unable to date. Evidence of that is the opinion of Gaston Maspero, the Director of the Department of Antiquities at the Cairo Museum, who wrote in 1900:

“The stela of the Sphinx bears, on line 13, the [name] of Khafre in the middle of a gap … There, I believe, is an indication of [a renovation and clearance] of the Sphinx carried out under this prince, and consequently the more or less certain proof that the Sphinx was already covered with sand during the time of his predecessors …”

This marvelous object [the Great Sphinx] was in existence in the days of Khafre, or Khephren, and it is probable that it is a very great deal older than his reign and that it dates from the end of the archaic period circa 2686 BC.

Thus, it is unimaginable why many modern Egyptologists and archeologists remained confident that the Sphinx can be linked to Khafre and the fourth ancient Egyptian dynasty.

One of the main reasons why the Sphinx is associated with King Khafre is a hieroglyph carved in ancient times on the stela placed between the Sphinx’s paws. Although not contemporary with the Sphinx, the massive granite stone commemorates the effort by King Thutmose IV to clear the statue of the ocean of sand that surrounded the monument, describing the monument as the very embodiment of “a sweeping, magical power that lived where the Sphinx now stands, dating back from the very beginning of time,” as explained by Egyptologist E. A. Wallis Budge.

The word Khaf, carved onto the stela, has led contemporary Egyptologists to suggest a connection to Khafre, therefore attributing the construction of the Sphinx to the fourth dynasty Pharaoh, the man who is thought to have built the second-largest pyramid at Giza as well.

It was Egyptologist Thomas Young who may have damaged a piece of the Sphinx’s history when not long after the stela was excavated by Battista Caviglia, he added the syllable Re between the square brackets, alluding to Khaf (re) commissioning the Sphinx.