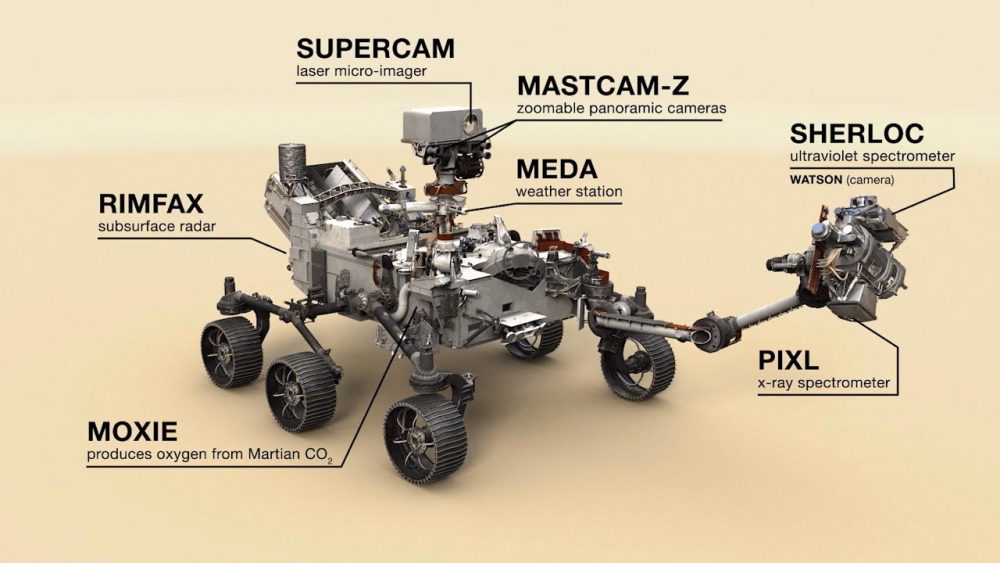 It carries 23 cameras in total, and two microphones. The rover will be accompanied by the helicopter Ingenuity.

NASA is set to Launch the next-generation rover to Mars on July 30, 20920, in a historic mission to explore the red planet. The Perseverance rover will hopefully allow us to better understand the red planet and help us figure out whether there is life on Mars, or if there was in the past.

Ahead of its launch, NASA has offered a detailed look into the science behind the ambitious astrobiology mission represented by the Perseverance rover. The mission is set to land on February 18, 2021, inside Jezero Crater; a peculiar region on Mars that was once, billions of years ago, home to a massive lake on the Martian surface, making it an excellent place from where the rover can study whether or not Mars was home to alien life.

“This is a wonderful place to live for microorganisms,” revealed Perseverance Project Scientist Ken Farley of Caltech, speaking of the time when the lake was still there.

“And it is also a wonderful place for those microorganisms to be preserved so that we can find them now so many billions of years later.”

Perseverance is truly a game-changer and is NASA’s most sophisticated rover yet. The car-sized, six-wheeled laboratory carries the most advanced instruments and technologies that will help pave the way for human exploration of the red planet.

Among its many goals on Mars, the rover is expected to study the habitability of Mars, look for signs of past, or present life on the red planet, collect and cache samples, and prepare for future manned missions to the surface.

But in addition to its state-of-the-art payload, the mission specialists are looking forwards to seeing how technological innovations, especially for entry, descent, and landing (EDL), will perform as the rover makes its way to the surface.

“The Mars 2020 mission landing system includes a parachute, descent vehicle, and an approach called a “sky crane maneuver” for lowering the rover on a tether to the surface during the final seconds prior to landing,” NASA reveals.

Why Perseverance is a game-changer

As you are reading this, several space agencies (both private and government) are cooking up their plan to make to put mankind on the Martian surface as soon as possible.

But to do this, we need to understand Mars the best we can. And here’s where Perseverance comes into play. With its state of the art technology, the rover will be able to learn more about Mars than we’ve ever done before. It is the first rover ever to carry a drill for coring samples from Martian rock and soil, and this is one of its key factors. The rover aims to look for signs of alien life on Mars, and life on the red planet could hide beneath the surface.

Perseverance is first at many things. In addition to its drill, the rover will carry Mars Helicopter Ingenuity, a robotic helicopter that will be used to scout interesting targets on Mars and help devise the best routes for that future Martian rovers will take. The helicopter is expected to launch at least five times during a thirty-day test campaign. As revealed by NASA, the helicopter will ride to Mars attached to the belly of the Perseverance rover.

Perseverance will have fewer difficulties exploring the arid surface of Mars. The rover was designed with wheels that are far more robust than those of the Curiosity Rover, which have sustained substantial damage, according to NASA. The MArs 2020 rover was built with thicker and more durable aluminum wheels, with a reduced width.