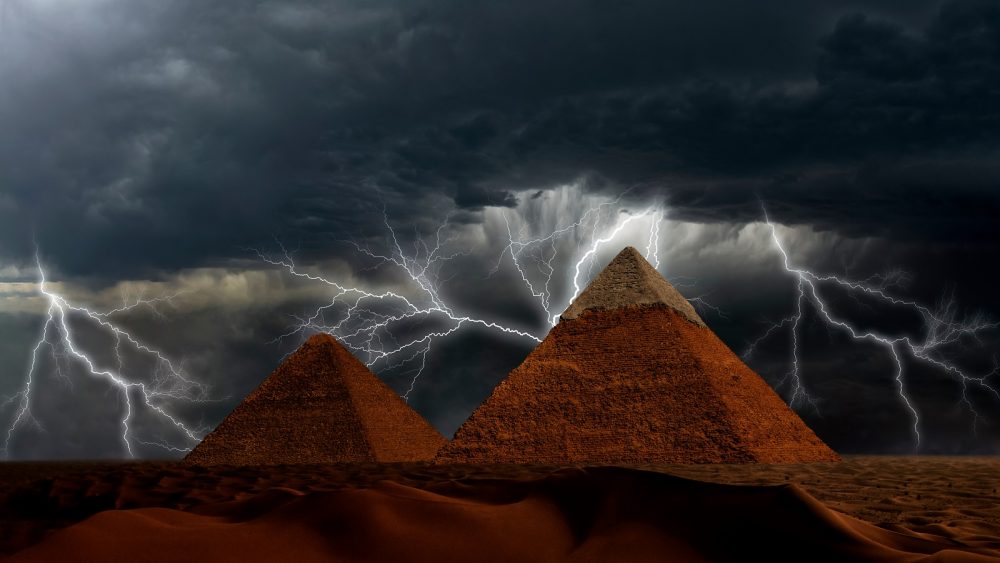 Although there aren't written records on how the Pyramids were built, the ancient builders left us a few clues.

There are two really widespread theories on the builders of the Egyptian pyramids.

One, particular is that aliens traveled to Earth and well, you know, stacked up stones and build the pyramids.

The other more likely scenario is that some 4,500 years ago, the ancient Egyptians revolutionized their construction methods and attempted to create a monument unlike any other. The great pyramid of Giza is evidence of the evolution of ancient Egyptian architecture and engineering. But it also demonstrates what a powerful civilization ancient Egypt was, in terms of economy, logistics and politics.

It was a project unlike any other attempted before. And it required a mastermind of a plan and state-of-the-art technology from 2,500 BC.

Eventually, it was this planning, technology, and manpower that allowed the ancient Egyptians to build a pyramid using 2.3 million blocks of stone. The average weight was around 3 tons per block, although there were certain stones used in the construction of the pyramid that weighed more than 60 tons.

On top of that, the ancient Egyptians covered the Great Pyramid with as many as 27,000 blocks of white, polished limestone, several tons each.

Building the pyramid is one thing but obtaining the materials to be able to build it was another logistical nightmare. It has been revealed by archeologists that the ancient Egyptians obtained some of the stones used in the construction of the Great Pyramid of Giza from quarries located 800 kilometers away. This means that the ancient builders needed to sort out transportation.

Since so many blocks of stones were used, it meant that there were probably a LOT of cargo ships that participated in the transportation of construction material. The material was transported via the Nile river, as it was the easiest way for them to move heavy things. In fact, it is believed that specific waterways were opened to get the material as closes as possible to the pyramid’s construction site.

Experts estimate that the Ancient Egyptians used 5.5 million tons of limestone, 8,000 tons of granite (imported from Aswan), and 500,000 tons of mortar were used in the construction of the Great Pyramid.

Doesn’t it bother you that we know so little about just how it was done, 4,500 years ago?

Luckily for us, we have a few clues.

Here are 3 things the ancient Egyptians made use of to successfully complete the Great Pyramid of Giza.

One of the most boggling things about the pyramid is how the massive blocks of stone were transported from their respective quarries to the construction site.

It is assumed that the Egyptians made use of the Nile River, and massive ships to transport the stones.

But the Khufu’s Pyramid is located not so close to the Nile River. So how did the hips transport the material there?

Archeologists discovered conclusive evidence that ancient Egyptian engineering terraformed the landscape near the Giza plateau. They removed massive amounts of soil, allowing the Nile River to fill in artificial channels. These channels or waterways were created as close to the pyramid as possible, meaning that the ships that would later arrive with construction material could get to the site as close as possible.

The archeologists discovered, a few meters beneath the surface of the Giza plateau, wet sand. In other words, they found traces of an ancient waterway, suggesting that water from the Nile river once flew there in ancient times, filling it with clay and silt.

The ancient Egyptians managed to terraform their landscape and made it easier for the pyramid to be built, by building deep, wide canals, essentially creating an inland port. Once the canals were crated the water would fill them, and it became much easier to transport the necessary materials to the construction site.

Without making use of waterways, it would have probably been way more difficult to build the pyramids.

The Herodotus machine was a device described by Greek Historian and writer Herodotus. Supposedly it was this device that allowed the ancient Egyptians to successfully build the pyramids.

Composed in 440 BC, Herodotus’ work (The Histories) is considered a record of the ancient traditions.

More importantly, he also revealed a lot of important details about the Pyramids, and even possible how they were built.

although some scholars suspect that Herodotus may have invented some of his historical accounts, he is usually acknowledged as delivering accurate reports.

One example that backs up his authenticity are his accounts of an ancient Egyptian boat called Baris,

a cargo vessel mentioned by the ancient Greek historian but thought to have been a myth.

Despite possible reasons to doubt his accounts, underwater archaeologists exploring the sunken city of Thonis (Egypt) would eventually find the ancient cargo vessel mentioned by Herodotus, confirming the accuracy of his writing.

Anyway, in Histories, the ancient writer tells us what the ancient Egyptians used to build the pyramids:

Essentially, Herodotus introduces us to previously unknown details that explain how it was possible for the ancient builders to lift the extremely heavy stones and finally build the Pyramid.

Located in Egypt’s Eastern desert, archeologist excavating an archeological site called Hatnub made another sensational discovery: they found a contraption that they say was probably used by the ancient Egyptians to move massive alabaster stones up a steep ramp.

In other words, archeologists argue that the ancient contraption, which dates back to the reign of Pharaoh Khufu was most likely used by the ancient Egyptian builders to construct the Great Pyramid.

“Using a sled which carried a stone block and was attached with ropes to these wooden posts, ancient Egyptians were able to pull up the alabaster blocks out of the quarry on very steep slopes of 20 percent or more,” the researchers wrote.

Essentially, the ropes that were attached to the sled would multiply the force making it easier to pull the sled up the ramp.

“The study of the tool marks and the presence of two [of] Khufu’s inscriptions led us to the conclusion that this system dates back at least to Khufu’s reign, the builder of the Great Pyramid in Giza,” explained Roland Enmarch, one of the directors of the archaeological mission.