A 4,500-year-old cemetery has been discovered southeast of the famous pyramids of Giza, the Egyptian Ministry of Antiquities recently announced.

A few kilometers away from the pyramids of Cheops, Khafre, and Menkaure, an Egyptian archaeological mission has discovered a number of secrets, ancient Egyptian tombs hidden beneath the desert.

The tombs date back to 2563 – 2423 BC and one of the burial chambers contained the intact sarcophagi of Behnui-Ka and Nuwi, two priests that lived during the Fifth Dynasty–the Dynasty that followed immediately after the construction of the pyramids of Giza according to the official story the Egyptian Minister of Antiques Khaled Anany has announced at a press conference.

Both men were thought to have been King Khafre’s priests.

According to scholars, Behnui-Ka had seven prestigious titles, including Priest and Judge to the Pharaoh.

The other tomb belonged to Nwi, a man believed to have served as the Chief of the Great State and ‘purifier’ of King Khafre.

“The tombs, separated by a few meters, hide under the golden sand dunes and behind limestone doors, an indicator of the power of the priests. In order to obtain such material the permission of the king himself was indispensable,” explained Mostafa Waziri, secretary general of the Supreme Council of Egyptian Antiquities.

An Old Kingdom cemetery has been uncovered at the south-eastern side of Giza Plateau.Today the ministry of antiquities…

Posted by ‎Ministry of Tourism and Antiquities وزارة السياحة والآثار‎ on Saturday, May 4, 2019

More hidden beneath the sand

“One of the two owners of the tomb is the priest of King Khafre, the world is watching this great discovery that dates back to the fifth dynasty,” explained Hawass.

Hawass teased the attendees saying that Egypt contains a vast number of tomb discoveries that have still not been revealed to the public.

In fact, according to Hawass, only around only 30 percent of the true amount has been excavated so far.

“Modern Egypt was built on top of Ancient Egypt. You can dig in the yard of your house and find something. This is what makes Egypt unique, the archaeologist concluded.

Via
Ministry of Antiquities
Get our content delivered to your email. Don't worry, we don't send spam. 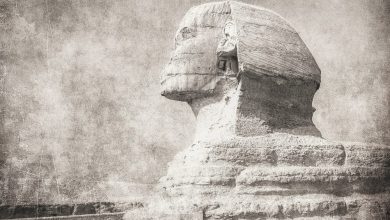 New, Startling Theory Proposes How the Ancient Pyramids of Giza Were Built