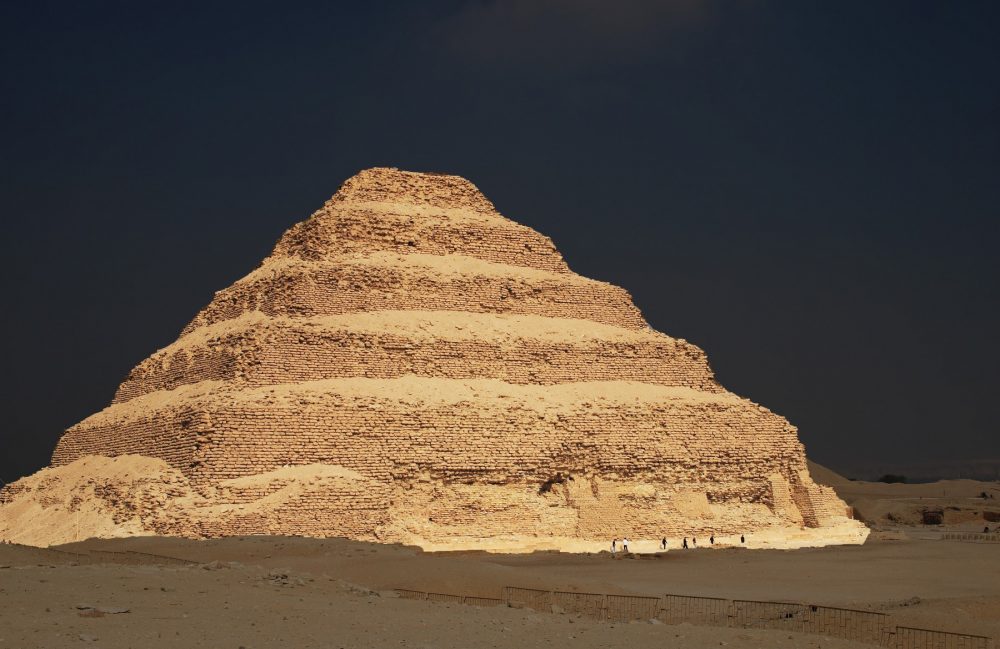 Below an ancient pyramid, the Egyptians created a massive underground world on a scale previously unknown, somehow quarrying more than 5.7 kilometers of tunnels, chambers, shafts, and magazines.

Beneath Egypt’s oldest pyramid lies a gigantic subterranean world with an estimated length of around 5.7 kilometers.

Massive, complex, and most importantly thought have been excavated and constructed more than 4,700 years ago, no other pyramid in Egypt has such a complex subterranean world beneath its foundations.

This means that long before the first pyramid was finished, somehow, the ancient Egyptians successfully excavated a massive world of around 5.7 kilometers worth of underground chambers.

It is thought that the pyramid in Egypt appeared abruptly and suddenly during the Third Dynasty rule of King Djoser. Constructed between 2,667 and 2648 BC, the Step Pyramid of Djoser was a revolutionary monument in Egypt’s history.

It changed many things, but most importantly, it led to a revolution in the architecture of Pharaohs’ land.

Considered the earliest large-scale cut stone construction in Egypt’s history, the Step Pyramid basically redefined how monuments were to be built for thereon.

Before Djoser, there were no massive stone buildings in Egypt, and the largest structures being built were the royal tombs called Mastabas, where kings and queens were buried.

Experts argue that the Step Pyramid of Djoser drew ideas from several precedents, most relevant of which is the Mastaba 3038, thought to have been constructed around 2,700 BC.

Built inside a deep rectangular pit, this ancient mastaba was built with mudbrick walls rising to 6 meters (20 ft). Its three sides were enlarged and built to create eight steps rising towards the sky at an angle of around 49°. Had the builders not left one of the sides uncovered, it would have probably resulted in an elongated eight-step pyramid.

Before the Step Pyramid of Djoser was built, the construction workers excavated a shaft in the rock, 28 meters deep and 7 meters square. This was the initial construction phase above which the first “mastaba” would be built upon.

The shaft which was sunk in the Saqqara bedrock would be the first step of a massive excavation project that would eventually result in a gigantic 5.7km-long network of tunnels, chambers, and magazines.

Eventually, the builders would begin building the first mastaba top the opening. It was an unusual structure because it was the first of its kind with a square plan. Each of its sides measured 63 meters and it rose some 8 meters in height.

Its core was built of locally quarried limestone.

Once the first structure was created, the pyramid architect decided to add to the original mastaba, the first addition expanding around nine meters to the eastern side, making the structure rectangular.

Before the mastaba was encased with polished limestone blocks, the builders were ordered to extend each side around three meters. This created the lowest stage of a pyramid that consisted of four superimposed mastabas, one built atop the other.

Egyptologists assume that this was the intended final step.

For reasons that remain unclear, the architect decided to further expand the structure.

Builders were tasked with extending the pyramid to the north and west, eventually resulting in a structure built of six superimposed steps. Before encasing the entire structure in limestone, another alteration expanded the pyramid slightly to each side, resulting in the pyramid’s final dimension of around 140 meters from east to west and 118 meters from north to south.

The main excavator of the Step Pyramid, archaeologist Jean-Phillipe Lauer argues that there were six stages in the construction process.

Djoser is thought to have reigned around 19 years, and he lived long enough for his pyramid to be completed.

If Djoser did rule nineteen years, we would obtain a major expansion to the structure every three years.

The Pyramid of Djoser was not the only revolutionary element at Saqqara. The pyramid was accompanied by various temples and pavilions, all of which were surrounded by a huge limestone wall 10.5 meters (34ft) high, and 1,645 meters (5,397ft) long, contained in a massive area spanning 37 acres, which is comparable to the surface area of a large town during the third millennium BC.

An underground world beneath the Pyramid

Although the Step Pyramid and its complex was a revolutionary superstructure, the above-ground elements are just one small part of the massive complex.

Beneath the surface, the Egyptians managed to excavate and build a vast underground structure on a scale previously unknown, quarrying more than 5.7 kilometers of shafts, chambers, magazines, and tunnels altogether.

Egyptologists say that the only precedent comparable to the amazing work done at the underground world beneath the Step pyramid is the 2nd-dynasty complex of underground galleries not far from Djoser’s complex, one of which is assigned to Hotepsekhemwy. Comparable, but not nearly as large.

Beneath the Step Pyramid of Djoser, a central corridor and two parallel ones extend over more than 365 meters connecting more than 400 rooms.

These subterranean features surround what is described as one of the most complex tangles of tunnels and shafts ever built in ancient Egypt below a pyramid.

After Djoser, not one pyramid was built with an underground world as massive as beneath the Step Pyramid.

As noted by archaeologist Mark Lehner, the subterranean network built under the pyramid is meant to evoke the Egyptian Netherworld’s watery associations.

However, the exact reason why the vast underground world was built beneath the Step pyramid–and how it was done–remains one of the oldest archaeological enigmas of Egypt.

Furthermore, why it was never repeated after Djoser adds fuel to the mystery.

Regrettably, there isn’t a single ancient document describing and explaining why the Step Pyramid was built. There are no documents that shed light on the construction and excavation methods used by the ancient Egyptians.

Nothing in recorded history tells us really anything about the pyramid complex and why there is a gigantic underground world beneath it.

Egyptologists assume that the massive subterranean world beneath the pyramid was meant to protect the mummified remains of Djoser, his family, and the many offerings that would accompany the king in the afterlife.

Nonetheless, the Pharaoh’s mummy was never discovered inside the alleged burial chambers beneath the Step Pyramid.

Despite not finding the Pharaoh’s mummified body, archaeologists did find a vast collection of artifacts, including more than 40,000 ancient containers.

Strangely, some of the inscriptions on the artifacts indicate that most of these were apparently not meant for Djoser but his ancestors.

Although the mummy of Djoser was not found beneath the Pyramid, archeologists did discover the remains of an 18-year-old female.

Mysteriously, when experts radiocarbon-dated the remains, they discovered that the female’s remains date back several generations before Djoser.

This leads us to wonder what the remains are doing beneath a pyramid that was supposedly built during the Third Dynasty reign of King Djoser.