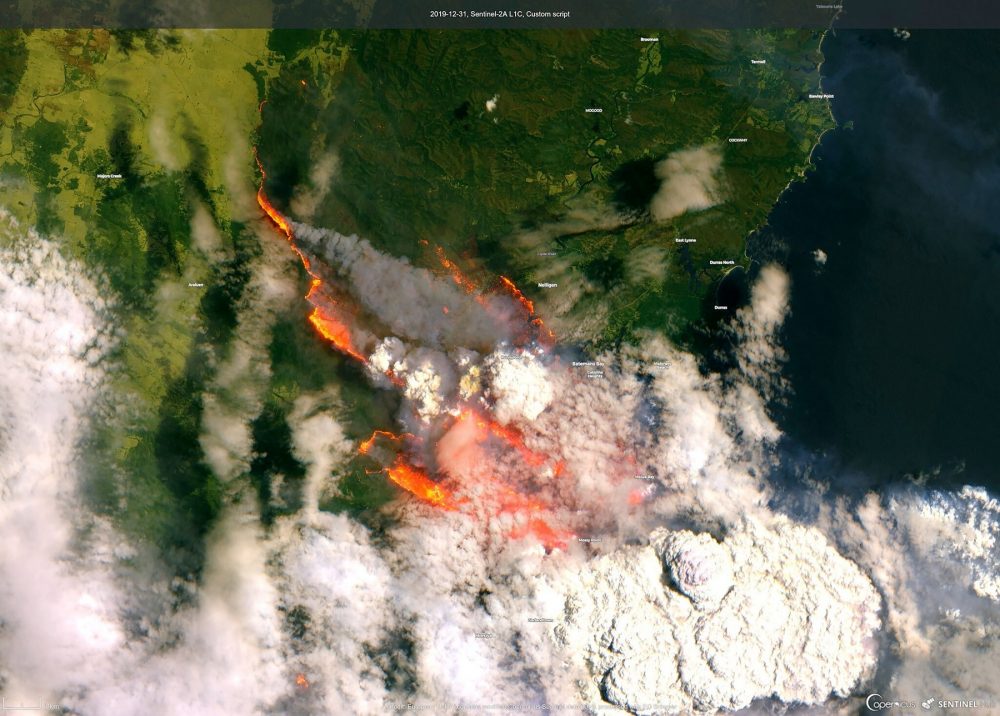 In New South Wales alone, blazes have formed a fire front in the state that — if put into a straight line — would stretch from Sydney, across the Indian Ocean, and all the way into Afghanistan.

Bushfires have been ravaging Australia for months now causing entire towns to burn, destroying rural communities and livelihoods. Experts have reported that at least 1,500 homes have been destroyed. Around 20 people have died and another 28 are reported missing. The smoke plume alone is approximately 1.3 billion acres or half the size of Europe.

The Japanese satellite Himawari-8 and the Suomi NPP (NOAA-NASA) are just some of the satellites that have managed to capture the threatening columns of smoke that cover the sky from Australia to New Zealand. NASA’s Aqua satellite has also managed to see the devastating fires from space, gathering important data.

The humongous amounts of smoke generated by the #AustraliaFires as seen by the MODIS instrument on board the AQUA satellite from @NASA, which is one of the #Copernicus Contributing Missions
More info at https://t.co/yCBI8EDNn7 https://t.co/uG1zTRlRpk pic.twitter.com/PewDqhNt7J

The terrifying images captured from space show the magnitude of the forest fires that affect Australia.

The Himawari 8 satellite from the Japanese Meteorological Agency, was launched in October 2014. The Japanese satellite provides a panoramic view of the Earth and takes photos of the surface every 10 minutes.

One of the most recent images the satellite took as it orbits Earth shows Australia. Although stunning, the image sadly shows the massive forest fires that affect the country.

But Himawari isn’t the only satellite that managed to snap an image of the fires in Australia. The Suomi NPP satellite also snapped a series of photographs from space as it was passing just above Australia, allowing us to see a better picture of the catastrophic fires.

The catastrophic fires in Australia began in September of 2019 because of natural causes, but experts say that they reached their current magnitude thanks to climate change and global warming.

Experts have revealed that hot, dry weather combined with increased drought and strong winds have produced ideal conditions for the fire to expand rapidly.

Data from the Bureau of Meteorology has shown that Australia has warmed overall by just over one degree Celsius since 1910. The data also shows that most of the heating occurred since 1960.

Experts estimate that more than 14 million acres have burned, about 500 million animals have died and hundreds of thousands of people have been displaced. The death toll from the catastrophe is at least 19 people.

The Australian fires are so massive that the brushfires can create their own weather.

As noted by the Business Insider, the scope of the fires is hard to grasp. In New South Wales alone, blazes have formed a fire front in the state that — if put into a straight line — would stretch from Sydney, across the Indian Ocean, and all the way into Afghanistan.