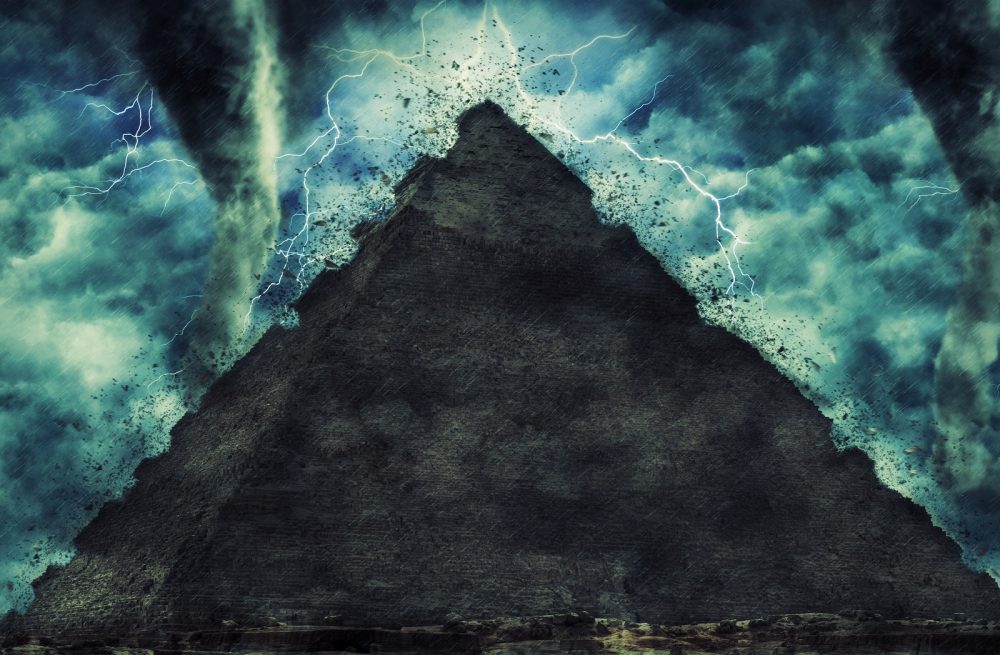 The Great Pyramid of Giza is one of the most grandiose ancient structures on the surface of the planet.

The Great Pyramid of Giza (also known as the Pyramid of Khufu) is the oldest of the seven wonders of the world and the only one that still stands and is the largest of the pyramids of Egypt.

Egyptologists maintain that the pyramid was built as the eternal resting place for Pharaoh Khufu.

The Pyramids of Giza, the most impressive structures erected in Egypt, have offered us decades of theories and mysteries.

Some explanations dealing with how, why, and when they were built are often closer to fantasy or science fiction than to real science.

The more we study the pyramids, the less we seem to understand them.

It is as if each new archeological study offers more questions than answers. In this article, we bring five reasons why the Great Pyramid of Giza is the most mysterious Pyramid erected on the surface of the planet.

However, the project involving the construction of the Great Pyramid was an unprecedented attempt, requiring serious planification and a massive labor force. It was a project unlike any other attempt before. And it needed a mastermind of a plan. Here’s why.

After it was completed, around 2,570 BC, the Great Pyramid of Giza remained the tallest structure on the planet’s surface for approximately 3,800 years. Finally, in the XIV century, it was topped by the Lincoln Cathedral in England.

Let that sink in. For 3,800 years, humankind did not build a structure taller and grander than the Pyramid of Giza.

To achieve the soaring height of the pyramid, the ancient Egyptians used a lot of stone. It is estimated that the Great Pyramid of Giza was built with about 2.3 million blocks of stone, whose average weight was around 3 tons per block, although there were certain stones used in the construction of the pyramid that weighed more than 60 tons.

Scholars further reveal that the monument was initially covered by about 27,000 white, polished limestone blocks, several tons each.

And not only did the ancient Egyptians use more than 2.3 million blocks of stone, but they also managed to place the structure at the exact center of the landmass on Earth. The pyramid became the most accurately aligned structure on the planet’s surface, facing true north with only 3/60th of a degree of error. It is estimated that  5.5 million tons of limestone, 8,000 tons of granite (imported from Aswan), and 500,000 tons of mortar were used to construct the Great Pyramid.

Just how was this achieved more than 4,500 years ago?

Surprisingly, not a single ancient document has been discovered that mentions how the pyramid was built. For example, what types of tools were used? How did they manage to stack the stones? How did they lift the stones? This is strange, considering the ancient Egyptians were excellent record keepers, so it makes no sense that they did not document their work.

Built as a tomb, but there’s no evidence it ever was one

If you ask any Egyptologist today what the purpose of the great pyramid of Giza was, you will get an answer that it was built as the tomb for Pharaoh Khafre.

When you take into consideration that the builders of the Great Pyramid made sure to assemble one of the most precisely aligned constructions on the planet, one of the largest buildings mankind has ever seen, and one of the most sophisticated buildings built thousands of years ago, you have to question what the purpose of such a monument was?

The tomb theory doesn’t seem to explain it at all.

If the Great Pyramid of Giza was built as a tomb, why aren’t there any inscriptions within the pyramid telling the story of the Pharaoh’s life? Isn’t it strange that the ancient Egyptians built one of the most incredible monuments on Earth and then decided not to include any hieroglyphs and depictions of the pharaoh in his journey to the afterlife?

Many tombs have been excavated from ancient Egypt, showing how creative the ancient Egyptians were when they built and designed tombs for royalty.

But the Great Pyramid of Giza does not include any depictions, illustrations, or Hieroglyphs.

The worst part is, never has a mummy been discovered in the Great Pyramid. Archeologists have never found a mummy inside any of the three main pyramids at Giza. Their explanation for the missing mummies is that the tombs were most likely looted in ancient times. Their contents were stolen, leaving the pyramid’s interior void of artifacts.

First-century BC historian Diodorus Siculus wrote about the Great Pyramid of Giza:

The Great Pyramid of Giza can focus electromagnetic energy

A tomb that can focus electromagnetic energy? How cool is that!

According to an international group of scientists, in the resonant state, the pyramid can concentrate electromagnetic energy in its internal chambers and under its base, where the third unfinished chamber is located.

Despite this, scholars maintain that it is doubtful that the ancient Egyptians knew about the electromagnetic properties of the pyramid, implying that this is just an interesting coincidence and another mystery about the pyramid.

The Great Pyramid is gigantic. But unless you go there and see it with your own eyes, it’s hard to understand how big it is.

Knowing the numbers may help.

If it was a tomb, it was one worthy of a god.

The Great Pyramid of Giza is stunning on the inside. And despite being void of hieroglyphs and illustrations like other ancient Egyptian tombs, the interior of the monument is beyond impressive.

Using muon particles originating from interactions between rays from space and atoms in our planet’s upper atmosphere, the scientists managed ‘peer’ inside the pyramid to map what’s exactly inside the pyramid. They found previously unknown chambers suggesting that the pyramid’s interior is not entirely explored yet and that many other unknown rooms could still exist.

Oh and did you know that the Great Pyramid of Giza is the only one that has both ascending and descending inner passages?