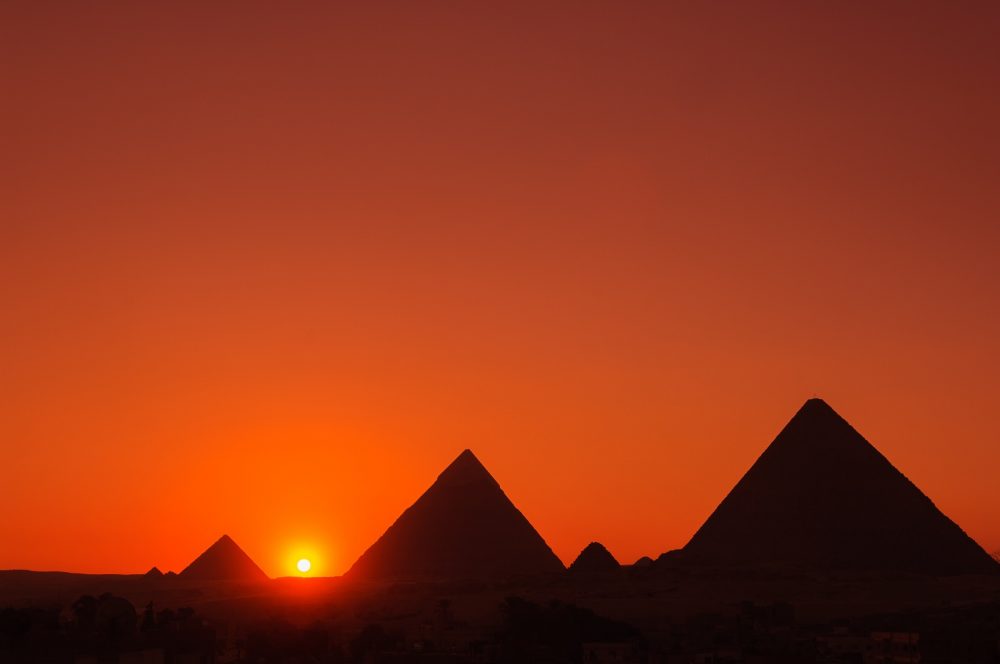 What we've discovered throughout the years about pyramids is entirely inconsistent with what Egyptologists are claiming the pyramids to be.

The most impressive ancient Egyptian pyramids, those located at Giza, were built in three generations. Khufu built the largest of the three. His second-reigning son Khafre and eventually Menkaure built the remaining two pyramids, which became known as Giza’s Pyramids.

All three pyramids were intricately aligned, and archeologists are convinced that unlike in previous pyramids, cardinality was a great concern for the designers of the pyramids at Giza. Evidence of that is the Pyramid of Khufu, which was laid out with its sides oriented almost exactly true north–the greatest deviation being under 5′.

Previous pyramids were also aligned, but the fourth dynasty builders took pains to ensure their structures would be aligned to an otherworldly precision.

Evidence of that otherworldly alignment is the Giza diagonal, which was most likely inspired by Orion’s constellation, which the ancient Egyptians identified as Osiris. The three pyramids at Giza seem to be positioned in a way that they mimic the three most prominent stars of “Orion’s Belt.”

Precisely this extraordinary precision gave the Great Pyramid of Giza a higher meaning. It was not just another stone structure that would stand the test of time; it was a monument carrying a message embedded in stone. A message planted in its precision and a message rooted within the mathematical formulas that make up the pyramid.

The Greatest Pyramid of them all

The Great Pyramid was destined for greatness even before the first stones of its foundations were laid down on the Giza plateau. The Pyramid was meant to serve a higher purpose, and evidence of that is its size and its complexity both on the inside and outside.

The Great Pyramid of Giza is the pyramid that stood the test of time. It is the largest construction project ever attempted by the ancient Egyptians, and it marked the peak of the pyramid age.  No other structure can be compared in terms of size, complexity, and alignment to Giza’s Great Pyramid.

It is unique in more ways than one.

But just as it is unique and extraordinary, the Great Pyramid is one of the most mysterious structures built in ancient Egypt.

Mainstream scholars argue that the Great Pyramid was built by Pharaoh Khufu, who rose to the throne of ancient Egypt around 2,551 BC. This towering structure was dubbed Akhet Khufu, meaning Khufu’s Horizon. The purpose of the pyramid, say Egyptologists, was to serve as the eternal resting place of the Pharaoh, who would remain protected in the afterlife inside a strcutre built of around 2.3 million stone blocks.

Not the first, but the best

It would lay down the foundations for future pyramid building, eventually giving rise to the true pyramid.

Step pyramids were short-lived in Egypt. After Djoser, numerous pharaohs sought to replicate the wonder created by Djoser but failed. It wasn’t until Pharaoh Snefru came to the throne that pyramid-building took off in Egypt.

Djoser’s Pyramid was succeeded by the failed pyramid at Meidum, probably commissioned by Pharaoh Huni, although some Egyptologists argue Sneferu finished the Pyramid. The Pyramid is in ruins and most likely collapsed during its initial construction phase.

Sneferu took the throne and moved to Dahshur to build his pyramid. There, he commissioned a structure that would become a unique example of early pyramid development in Egypt. Archeologist argues that Sneferu’s Bent Pyramid at Dahshur represents the transitional form between the step-pyramid introduced by Djoser and the smooth-sided pyramids that would eventually become the most popular pyramids in Egypt.

The Bent Pyramid at Dahshur was succeeded by the so-called Red Pyramid or Northern Pyramid. The structure is the largest of the three major pyramids constructed at the Dahshur Necropolis. It is also Egypt’s third-largest pyramid, with a total volume of 1,694,000 cubic meters (59,823,045 cu ft)

The Red Pyramid is believed to have been Sneferu’s third pyramid and was the world’s tallest structure c. 2590 BCE–2570 BCE at 104 meters high.

The Red Pyramid would lay down the foundations and brought the necessary knowledge to allow the construction of the first pyramid at Giza, the Great Pyramid of Khufu, which would eventually become the largest pyramid erected in Egypt.

“From the heights of these pyramids, forty centuries look down on us.”― Napoleon Bonaparte. Speech to his troops in Egypt (21 July 1798)

Sneferu ruled Egypt for nearly half a century, during which he most likely completed three gigantic, exemplary pyramids at Meidum and Dahshur. But his son Khufu built a wonder that the people of Egypt had never before seen. In terms of its size, the technical accomplishment of its construction, and the great concern for accurate alignment, the Great Pyramid represents a major leap forward in pyramid building.

Now, it is generally acknowledged and accepted, to the point that only a few people dispute this idea, that the Great Pyramid of Giza and all previous pyramids served essentially as tombs.

This is controversial for several reasons, but the biggest one being that neither the mummy of Djoser or Sneferu, the two pyramid-building Pharaohs that kickstarted pyramidomania in Egypt, have ever been found. Their alleged burial chambers within their pyramids are empty, and there are no traces of their mummies.

Furthermore, these two Pharaohs supposedly built the most impressive stone structures to date, paying great attention to detail and design. Yet, their supposed burial chambers on the inside were cold, ugly, and a total contrariety to their exterior.

This is inconsistent with everything we know about the ancient Egyptians, who paid great attention to detail.

Eventually, with the completion of the Great Pyramid of Giza, ancient Egypt saw the birth of a stone-made wonder of the world. And just as the Pyramids of Djoser and Sneferu were cataloged as tombs, this one too was supposedly built as the eternal resting place for a Pharaoh.

That Pharaoh is believed to have been Khufu, and just as with his predecessors, his body was never found inside the Great Pyramid.

Building a monument like the Great Pyramid of Giza with intricate exterior details and completely ignoring the interior of the pyramid is like building a limited-edition Ferrari and then forgetting to put an engine inside it.

There are several mathematical properties within pyramids: “Petrie found nothing that disproved the pyramidologist’s assumption that the Great Pyramid had been built according to a master plan. Indeed, he describes the Pyramid’s architecture as being filled with extraordinary mathematical harmonies and concordances: those same strange symmetries that had so haunted the pyramidologist. Petrie not only noted, for example, that the proportions of the reconstructed pyramid approximated to pi – which others have since elaborated to include those twin delights of Renaissance and pyramidological mathematicians, the Golden Section and the Fibonacci Series.” ― John Romer, The Great Pyramid: Ancient Egypt Revisited.

In addition to the mathematical properties embedded within the structure, it has been found that the Great Pyramid of Giza is unique in more ways than one. For example, the Great Pyramid is the only known pyramid that has both ascending and descending passages. It is also the only eight-sided pyramid in Egypt.

Rather than what we found, it’s what we didn’t. Neither the pyramid of Djoser, the pyramids of Sneferu, nor the pyramids built by Khufu, Khafre, or Menkaure housed the mummified remains of a Pharoah. Furthermore, the alleged burial chambers within their respective pyramids show a complete lack of attention that a Pharaoh’s tomb deserves.

In a statement, the Egyptian antiquities ministry explained the scientists had “concluded the existence of several thermal anomalies that were observed on all monuments during the heating-up or the cooling-down phases,” referring to surveys taken during sunrise when the constructions warm up from the Sun, and sunset when they dissipate heat. “To explain such anomalies, a lot of hypotheses and possibilities could be drawn up; the presence of voids behind the surface, internal air currents,” the statement revealed.