Countless similar artifacts have already been destroyed for profit throughout the ages.

Scientists have found an artifact made of the bone of a giant deer, decorated with chevrons. It was discovered in northern Germany at the entrance to the Einhornhöhle cave. The discovery, which is no less than 51 thousand years old, is proof of the presence of abstract thinking among the Neanderthals, which gave them the ability to create symbolic objects.

The ability of Neanderthals to perform symbolic actions has long been a controversial topic among anthropologists, although in recent years there has been increasing evidence that ancient humans created objects of art and had complex funeral rites.

Some of the earliest examples are parallel incisions on the bone of an elephant from Bilzingsleben dating back about 300-400 thousand years, as well as painted “arrows” on the fragments of bones from the Oldisleben site. The few decorations of the Neanderthals in the form of drilled teeth of animals are known only from the very late sites in France, when Europe was already actively inhabited by Cro-Magnons.

The oldest cave paintings were also left by the Neanderthals about 65 thousand years ago. They were recently discovered in three Spanish caves.

51,000-Year-Old Chevrons on bones as evidence of the abstract thinking of Neanderthals

Scientists made an incredible discovery in the north of Germany, in the Einhornhöhle cave (“Unicorn Cave”), where archaeological excavations have been carried out since 1988. Since the Middle Ages, people have come here in search of ancient bones, whose powder was sold as medicine. Who can tell how many priceless artifacts have been lost for this reason only?

Most of the finds were from cave bears ( Ursus spelaeus ) and other large mammals such as cave lions ( Panthera spelaea ). Scientists recently discovered that about a hundred thousand years ago, the cave was inhabited by Neanderthals.

Dirk Leder from the Regional Office for Cultural Heritage of Lower Saxony, together with scientists from Germany, examined a bone artifact found at the entrance to the Einhornhele cave. Radiocarbon dating has shown that the object is at least 51 thousand years old. The find turned out to be a phalanx of a giant deer ( Megaloceros giganteus ), on which notches are visible. Its dimensions were 56.8 x 39.9 x 30.9 millimeters with a mass of 36.1 grams.

According to scientists, the observed cuts differ significantly in location, depth, and profile from unintentional modifications, for example, from cutting marks. The item has no practical application due to its small size and convex surfaces. Anthropologists note that the six-line geometric pattern itself is the centerpiece of the artifact.

Experimental research showed that to create incisions with a depth of two millimeters, apparently, it was necessary to first boil the bone. This made the material soft and provided a secure grip that made it easy to manipulate the flint tool. Scientists noted that the intricate manufacturing process required to create such cuts in the bones, their location, and the rarity of giant deer north of the Alps, supported the idea of ​​deliberately creating an artifact with symbolic meaning.

The earliest presence of Homo sapiens in Southeast Europe (1,500 kilometers from the site where the artifact was discovered) dates back 45 thousand years ago, so they could not influence the Neanderthals when creating the item.

Anthropologists have concluded that the capacity for the creative expression of early Homo sapiens has long been known and recognized. However, the evidence for the symbolic behavior of Neanderthals is often disputed. The find from Einhornhele confirms that they possessed abstract thinking and could produce art objects without the influence of modern people. 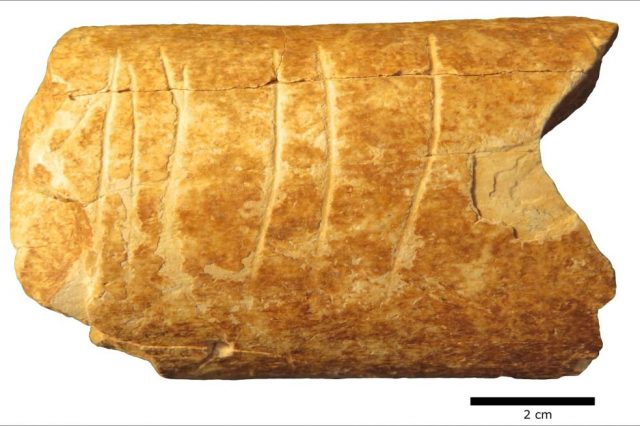 Discovery Of Symbols Etched On a 120,000-Year-Old Bone Rewrite History