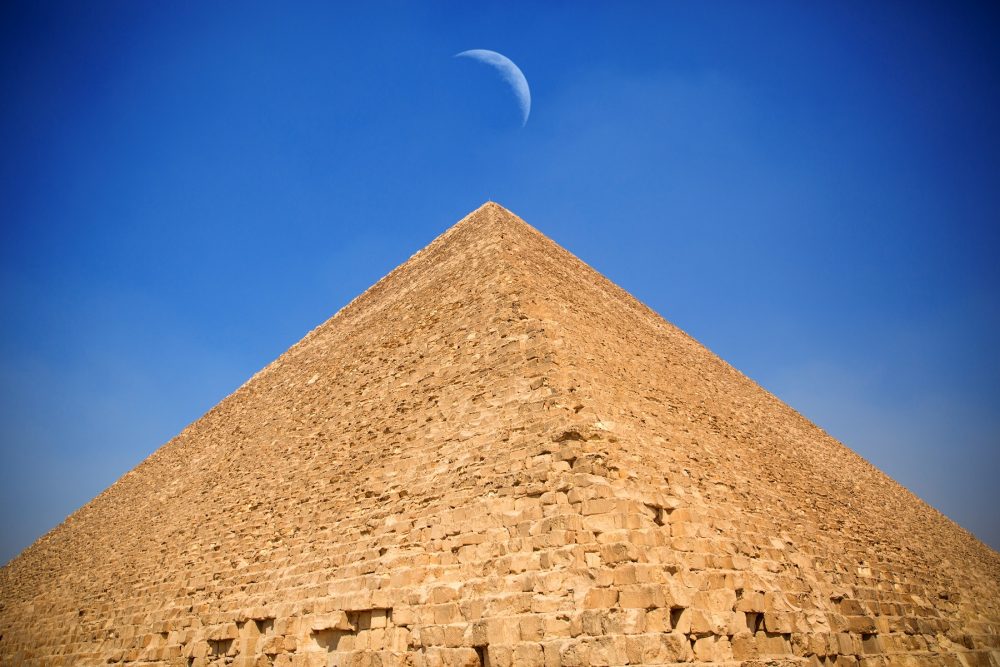 There aren't really many images that do the pyramid's size justice, but these images here come pretty close.

Mainstream scholars, school books, and most widely accepted theories have it that around 4,500 years ago, the ancient Egyptians completed the construction of one of the most mesmerizing structures in the ancient world.

During the Fourth Dynasty of Ancient Egypt, Egyptologists say that the most sophisticated and distinct pyramids of Egypt were being built.

Before the construction of the Great Pyramid of Giza, Pharaoh Sneferu ruled Egypt for several decades, during which he successfully transformed the ancient Egyptian pyramid building techniques, which were introduced a few generations earlier by King Djoser who commissioned the first step-pyramid in Egypt during his reign in the Third Dynasty.

While the Step Pyramid at Saqqara was a revolutionary structure and one that changed ancient Egyptian architecture, the changes, adaptations, and techniques introduced by Sneferu’s architects marked the beginning of ancient Egypt’s most prolific Pyramid building age, starting with the successful completion of the Bent Pyramid at Dahshur.

The Red Pyramid of Sneferu laid down the foundations for future pyramid building in Egypt, and it is regarded as Egypt’s first successful endeavor at building a “true” smooth-sided pyramid.

At 105 meters in height, the Red Pyramid stands as the third-largest Pyramid ever constructed in ancient Egypt.

The construction of the Red Pyramid also signalized the end of an era, Sneferu’s era, which was succeeded by his son Pharaoh Khufu. Perhaps without even knowing so, Khufu would become ancient Egypt’s most famous pyramid builder: he built the most massive Pyramid Egypt had ever seen, as well as the tallest. The Great Pyramid of Giza would remain the tallest man-made structure on the surface of the planet for more than 3,800 years.

According to mainstream scholars, it was he who commissioned early in his reign a pyramid that would overshadow all others in Egypt.

The work of building the Great Pyramid was given to the royal vizier and Architect Hemiunu, a man who would eventually plan and design the greatest Pyramid in Egypt.

Just as its size would eventually show, the project was unseen in all of Egypt.

According to mainstream measurements, the Great Pyramid of Giza was built using 2.3 million blocks of stone that resulted in a pyramid with a total volume of 2,583,283 cubic meters (91,227,778 cu ft), and a total weight calculated at around 6.5 million tons.

To build the Pyramid, Egyptologists argue that the ancient Egyptians made use of approximately 5.5 million tons of limestone, 8,000 tons of granite (from Aswan), and more than 500,000 tons of mortar to build the Great Pyramid.

The tremendous size of the Great Pyramid only tells one part of the story. In addition to building a truly gigantic monument, its builders made sure to create an extremely precise one as well.

As noted by many scholars, the accuracy of the Pyramid’s workmanship is such that the four sides of its base have only an average error of 58 millimeters in length. It has been found that the Great Pyramids base is horizontal and flat to within ±15 mm (0.6 in).

Not only that, but the sides of the square base were closely aligned to the four cardinal compass points within four minutes of arc, based on true north. It has been found that the Pyramids finished base was squared to a mean corner error of only 12 seconds of arc.

This unprecedented and phenomenal precision remains one of the many enigmas surrounding the Great Pyramid of Giza.

As noted by Lehner, for the royal designers of the monument, this phenomenal exactitude may have been embedded with symbolic or even cultic significance that eludes us today.

It is noteworthy to mention that the Great Pyramid of Giza is also unique in more ways than one. It has been found in surveys dating back to the 1700s that the Great Pyramid was the only monument built having eight sides. This striking feature was first mentioned in La Description de l’Egypte in the late 1700s by Sir William Matthew Flinders Petrie, an English Egyptologist.

It is mindboggling to understand the extraordinary precision of the Great Pyramid while knowing that those who built it somehow managed to transport massive stones which at the base weigh more than 15 tons. The images in this article show some of the larger stones used in its construction.

However, these massive stones are small compared to those used inside the King’s Chamber and stress-relieving chamber above it; scholars estimate these blocks weigh from 50 to 80 tons.

It remains an absolute enigma how the ancient builders managed to transport such gigantic stones from their quarries to the construction site, and up to the Pyramid. All of the mysteries and enigmas surrounding the Great Pyramid are emphasized by the total lack of ancient texts mentioning its construction.

Surprisingly, although the ancient Egyptians were meticulous, excellent record keepers, not one ancient text, hieroglyphics, or set of symbols has been found to explain, mentioned, or detail the exact construction phases involved in building the Great Pyramid of Giza.

This, however, does not apply only to the Great Pyramid. In fact, not one ancient text has been found anywhere in Egypt that mentions the construction of the first Pyramid of Egypt, the Step Pyramid at Saqqara. The same mysteries continue with the pyramids built by Sneferu, the one at Meidum and the two pyramids at Dahshur.

Not one ancient text happens to mention the consecution methods, plans, or techniques involved in a pyramid’s construction. This is very strange, knowing that there are around 120 different pyramids spread across Egypt.

The Size of the Great Pyramid in images

To understand the size of the Great Pyramid, here are seven stunning images that show how freakishly large the structure is.

As previously revealed, some of the stones used in the construction of the Great Pyramid are truly massive, and a perfect image showing just how big they are is the photograph above. Of all the images showing the size of the Pyramid, this one is perhaps the most revealing.

People standing in front of the Great Pyramid really do look small.

The above image shows a group of people climbing the massive stones of the Pyramid’s core, accessing the monument through a blasted door. Another great image showing the size of the Pyramid.

The Great Pyramid is believed to have been built with around 2.3 million blocks of stone, some of which weigh more than 2.5 tons. All of this was supposedly built in a period of approximately twenty years.

Can you spot the person standing on one of the massive stones at the Pyramid’s base in the above image?