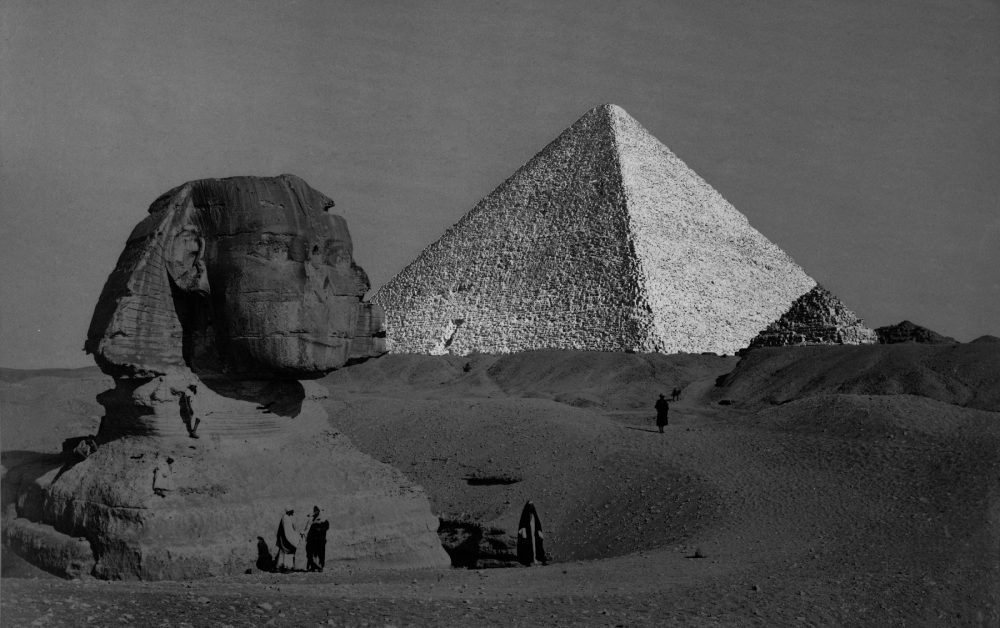 There are pyramids scattered across the entire planet. For reasons we have still not fully understood, thousands of years ago, as far back as 3,000 BC, ancient cultures build incredible, massive pyramids.

The most famous pyramids are arguably those at Giza, with the Great Pyramid of Khufu being recognized in the world as the symbol of the ancient pyramid.

Despite this—perhaps—well-deserved fame, Egypt’s Great Pyramid isn’t the oldest, nor the largest pyramid on Earth. Although we can say for certain, it isn’t the largest, and its exact age is a matter of discussion.

Based on archeological work at the Giza plateau, and mostly backed up by no more than archaeological guesswork, Egyptologists maintain that the Great Pyramid of Giza was constructed during ancient Egypt’s Fourth Dynasty, under the rule of Pharaoh Khufu.

But why are researchers so sure that Khufu indeed built the Great Pyramid? Despite having studied Egypt for decades, no archeological mission has ever managed to find an ancient text mentioning the construction of the Great Pyramid—or any other Egyptian pyramids for that matter—, its age, purpose, and means by which it was built.

Despite the fact that the ancient Egyptian civilization is known for having been excellent record keepers, for reasons we are yet to fully understand, they failed to write down the exact methods by which the pyramids were built, the technology used to build them, their purpose, their original names, and the date when they were built.

This strange lack of records doesn’t happen just with the Great Pyramid of Giza. In fact, if we were to trace back the timeline of ancient Egyptian pyramid building and travel back to the Third Dynasty of Egypt when Pharaoh Djoser ruled the land of Pharaohs, we would find the same lack of texts describing how the first pyramid was built.

According to mainstream Egyptology, the first pyramid ever built in Egypt is the Step Pyramid of Djoser at Saqqara.

Thought to have been constructed around 4,700 years ago, the monument described, planned, and constructed by Imhotep appeared abruptly in the historical timeline of ancient Egypt.

The Step Pyramid at Saqqara is not only the earliest colossal stone building in Egypt, but it is also viewed as the earliest large-scale cut stone construction in history. Never before had a construction project of that size been attempted in Egypt.

In more ways than one, the Step Pyramid was revolutionary. Scholars agree that the social implications of planning, designing, and constructing such a project are staggering. The process involved in completing such a monument was far more labor-intensive than previous ancient Egyptian monuments, which were constructed out of mud bricks and lesser materials.

The Pyramid of Djoser suggests that the royal government already had firm control over both material and human resources during the Third Dynasty.

Once completed, the Step Pyramid of Djoser rose approximately 65 meters into the air. Surrounding the pyramid, Imhotep build various temples and structures, all of which were protected by a massive enclosure wall of light Tura limestone 10.5 m (34 ft) high. Beneath the Step Pyramid lies the remnants of a massive subterranean world stretching nearly 6 kilometers in length.

The Step Pyramid, therefore, laid down the necessary foundations for the construction of the pyramid. This is, according to Egyptologists, the accurate timeline of ancient Egypt’s, rulers, monuments, and pyramids.

But is the pyramid of Khufu really his? The conclusion that the Great Pyramid was commissioned by Khufu is mostly based on a mark located in an interior chamber of the structure which names the work gang and mentions the Fourth Dynasty ruler.

A supposed reference to Khufu and the Great Pyramid of Giza is found in the so-called Merer Journal, which happens to be the only known ancient text that mentions Giza and Khufu, dating back from the Fourth Dynasty.

The ancient papyri do not mention how the pyramid was built, nor that the pyramids even being built during the reign of Khufu. It just mentions that a group of workers was tasked with transporting stones from Tura to Giza via boat. These stones may have been used for various construction projects, and even to repair or in readjusting the Great Pyramid.

The lack of any other ancient texts making reference to the pyramid, or how it was built, is one of Egypt’s greatest enigmas.

After all, the Egyptians managed to build a pyramid that lasted the test of time. It is one of the most complex, massive, and precisely aligned pyramids in the world.

Scholars indicate that upon completion, the Great Pyramid rose 146,6 meters (481 ft) or 280 Egyptian Royal cubits into the air, with its original capstone and casing stones. However, today, the pyramid stands at 137 meters (449.5 ft). Such was its size that it remained the tallest man-made structure on the surface of the planet for more than 3,800 years (from approximately 2560 BC to 1311 AD).

It is bewildering to discover that the ratio of the perimeter-to-height of 1760/280 Egyptian Royal cubits equates to 2π to an accuracy of better than 0.05 percent (corresponding to the well-known approximation of π as 22/7), and Egyptologist Sir Flinders Petrie concluded that the “relations of areas and of circular ratio are so systematic that we should grant that they were in the builder’s design.”

Whoever its builders were, evidence of their complex knowledge in various science is deeply embedded within the structure which consists of an estimated 2.3 million blocks of stone.

It is baffling how the builders managed to transport massive stones to the construction site of the pyramid; some of the largest in the pyramid, found in the “King’s” chamber, weigh 25 to 80 tons and were transported from the stone quarries of Aswan, located more than 800 km (500 mi) away.

The construction of the Great Pyramid of Giza was a project unlike any other in the history of Egypt. Experts estimate that approximately 5.5 million tons of limestone, 8,000 tons of granite (imported from Aswan), and 500,000 tons of mortar were used to construct the pyramid in no more than 20 years.

The Great Pyramid of Giza’s estimated weight has been calculated at around 6.5 million tons.