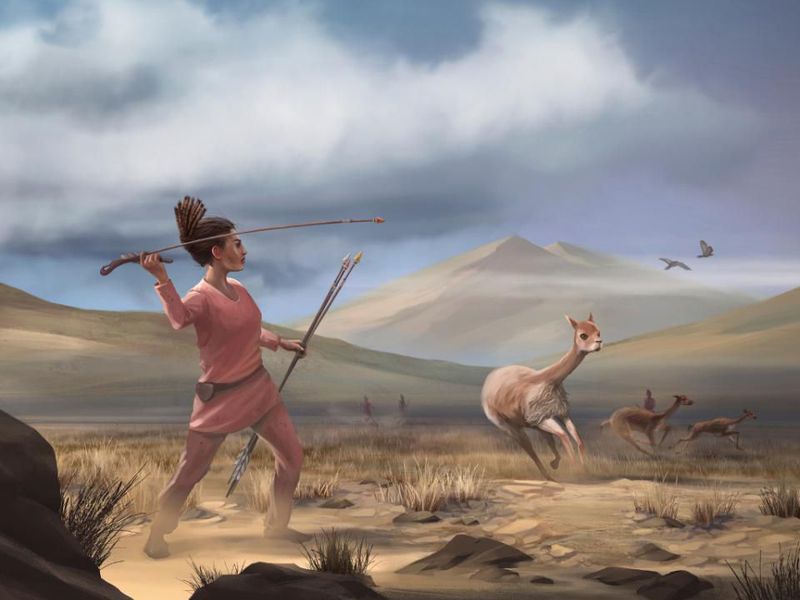 Recent discoveries of ancient graves in the Andes could prove that men and women shared the same role as hunters.

A recent discovery in the Andes of the tomb of a 9,000-year-old female hunter shatters the myth that ancient men hunted and women took only herbs and fruits and vegetables.

“The finding accompanies the idea that the gender roles we take for granted in our society today – or that many take for granted – are probably not as natural as some people suggest,” said Randal Haas, an assistant professor of anthropology at the University. of California, Davis.

Everything you need to know about the discovery

In 2013, Haas was working on various excavations in the Andes, when a local member of the Peruvian society, Mullah Fassiri, reported that hundreds of ancient stone tools were scattered in the area.

Five years later, after securing the necessary funding and assistance from locals, Haas and his team began excavating the site, which became known as Wilamaya Patjxa.

In 2018, researchers discovered six human graves in Wilamaya Patjxa (a year later they came across more). There were hunting instruments in two of the six, but one of them managed to attract their attention.

In the sixth tomb, dating back 9,000 years, they discovered a rich accumulation of artifacts of greater significance.

The grave is believed to have belonged to a hunter-gatherer (based on an examination of the remains), who died at the age of 17-19.

During the excavations, archaeologists made up stories about the greatness of the hunter whose grave they discovered but in the end, it appears that the hunter was actually a woman.

The Hunter was a female

James Watson, an associate professor of anthropology at the University of Arizona and co-author of the study, was the first to point out that this was probably not a man. He examined the bones of the hunter-gatherer and stated that they were smaller than the others found in the area and that the skeleton must be female.

Indeed, a detailed analysis of the protein in the teeth of the young hunter-gatherer confirmed that it is a woman.

However, Haas and his team are beginning to wonder if this is an isolated case of a woman hunter or something completely normal for the ancient Americans.

To answer this question, they began researching other graves of hunter-gatherers from the Late Pleistocene (ending about 11,700 years ago) and the Early Holocene (beginning about 12,000 to 11,500 years ago).

The team identified 429 skeletons from 107 ancient tombs across America. Out of all, 27 were buried with hunting tools for large animals and 11 of those were actually women.

Additional statistical analysis shows that between 30 and 50 percent of hunters in these populations were women.

“What we see is that the graves of both men and women are associated with hunting tools for large animals,” says Haas.

According to Associate Professor Marin Pillu of the Department of Anthropology at the University of Nevada, who did not participate in the study:

“The authors make quite convincing arguments that the female skeleton is most likely a hunter of large animals and that such a finding is not uncommon among the local population.

If the same artifacts were found in a male skeleton, there would be no hesitation at all that he was a hunter.

It is not clear whether female gatherers in other parts of the world have also hunted actively, but it is quite possible to find similar things elsewhere”

All in all, we should really consider that this gender bifurcation that has marked the last several thousand years of human history maybe did not exist in the earliest periods of mankind’s evolution.

If you want to read the entire study, it was published here in Science Advances.