A giant turtle thought to be extinct for more than 100 years has been found by a group of scientists on the Galapagos Islands.

Ecuadorian Park Guards and members from a US conservation organization have discovered the turtle alive and well on one of the Islands of the Galapagos Archipelago.

“Since only one other specimen of this species has ever been found (a deceased male collected in 1906), we have never seen a female of the species,” said Anders Rhodin of the Turtle Conservancy, in the statement.

“The photos from the team clearly show a moderately saddle-backed, old female about half to two-thirds the size of the known male. Pending genetic confirmation, this is almost undoubtedly the lost Fernandina Giant Tortoise.”

As noted by a statement from the ministry of the of Ecuador, the turtle Chelonoidis Phantasticus, a female that is more than 100 years old, was found on Monday in a vegetation zone on Fernandina Island.

“For the Galapagos, it really is perhaps the most important find in the last century,” said Washington Tapia, a scientist at Galapagos Conservancy.

The Turtle is no being moved via boat to the Giant Turtle Breeding Center on Santa Cruz Island where it will stay in a specially designed habitat.

“This facility will ensure her ongoing survival, a healthy diet and perhaps, if sperm retention has occurred, fertile eggs and offspring,” explained Animal Planet, in its statement.

“The hope is that her discovery will prompt new searches and ongoing funding for the location of a suitable mate with the ultimate goal of re-releasing many healthy animals back onto the island.”

The discovery of the giant turtle has given hope that more similar creatures may exist in the wild. Scientists have discovered more tracks on Fernandina Island, in the western part of the archipelago that suggests more turtles could exist in the area.

“We have to assemble a new expedition to return to the site and inspect if there is another individual of the same species,” explained Danny Rueda Cordova, Ecosystems Director at the Galapagos National Park.

Scientists hope to discover male turtles on the island. If they do, they will begin the process of breeding the species in captivity. 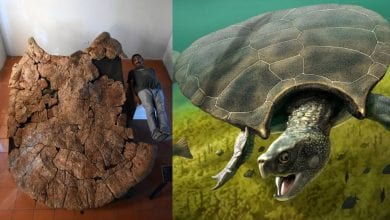