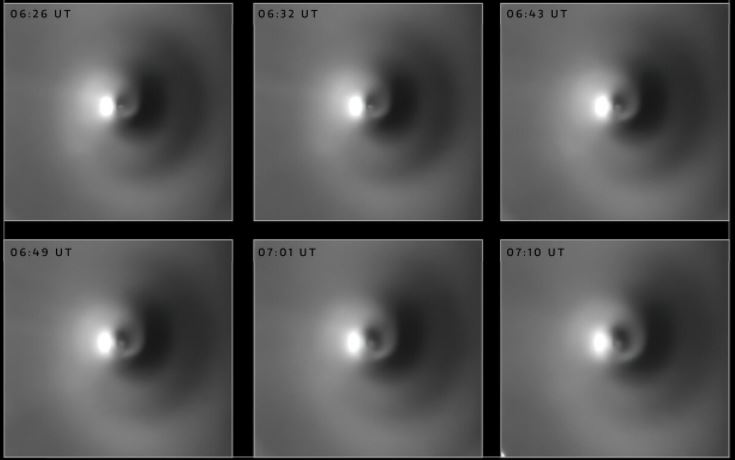 Check out the hypnotizing spiral motion of comet NEOWISE as it sheds gas and dust into space.

Video footage that was created out of a sequence of eight images reveals the intricate rotation of comet NEOWISE and how it expels gas from its frozen core in a spirally hypnotizing motion. The sequence was created using data from the international Gemini Observatory’s Gemini North telescope on Hawai’i’s Maunakea.

The images used to create the video sequence were obtained on August 1, 2020, using the Gemini multi-object spectrograph over a period of 1.5 hours. In this sequence, the set of eight images is looped nine times.

When Comet NEOWISE (C / 2020 F3) traversed the inner Solar System in mid-2020, astronomers and the general public watched in awe as this “dirty snowball” spewed gas and dust into space, producing a strikingly visible spectacle visible to the naked eye.

The new observations show a spiral stream of molecular gas revealing the rotation of the comet’s nucleus. The time-lapse sequence, compressed to just a few seconds, accounts for about a fifth of the comet’s rotation period of about 7.5 hours.

The spiraling motion seen in the video is most likely created as the comet releases gasses in geyser-like jets, which cause the comet’s core to rotate. As the vaporized material spews into space, its rotation makes to comet appear to spiral outwards.

A wonder in the sky

As it made its way around the sun, I had the opportunity to set up my telescope and observe the comet in the Northern hemisphere. It was an unforgettable experience that I got to share with friends and family.

Luckily, I was also able to snap some images of the comet, which is set to return to the inner solar system in around 6,500 years. NEOWISE was one of the brightest comets to appear in the sky in the last two decades, and I believe it left a positive impact among kids who observed the stunning ice ball in the sky. Hopefully, this experience will get more children interested in science and astronomy in the near future.

NEOWISE was discovered on March 27, 2020, by astronomers during the NEOWISE mission of the Wide-field Infrared Survey Explorer (WISE) space telescope. The comet was widely photographed by professional and amateur astronomers around the globe. The comet was so bright that even people living in cities with high light pollution were able to spot it in the sky.

The material expelled by the comet plays a crucial role in its rotation, making its nucleus—estimated at around 3mi; 5 km—to spin upwards and downwards as it moves through space.