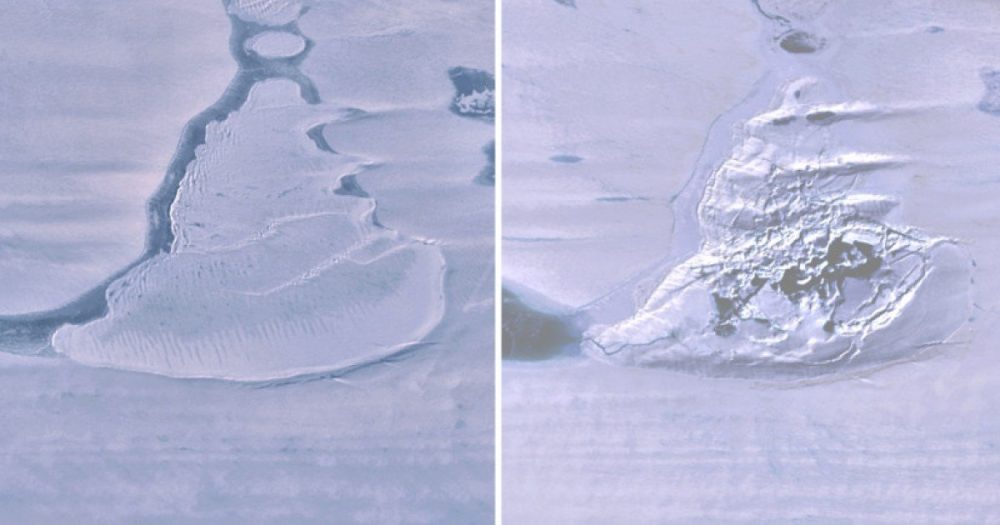 Scientists believe that meltwater, which had accumulated for a long time in a deep lake on the surface of the Amery Glacier, split the ice mass and quickly flowed into the ocean.

In East Antarctica, a large lake on the surface of the Amery Ice Shelf suddenly disappeared. It carried more water than Lake Erie can hold, the fourth largest of the five Great Lakes in North America.

According to scientists from the Scripps Oceanographic Institute at the University of California at San Diego (USA) and the Institute of Marine and Antarctic Research at the University of Tasmania (Australia), who analyzed satellite images of the ICESat-2 apparatus, a 600-750 million cubic meter lake quickly seeped through the cracked strata glacier into the ocean.

Scientists managed to fix the fact of disappearance by analyzing images from a radar satellite, which is able to “see” in the polar night. The study of the images made it possible to determine the time of the event with an accuracy of up to a week. Scientists believe the lake disappeared in June 2019.

“The water accumulated in the deep lake has opened a crack in the ice shelf below it. A process known as fracturing caused water to drain into the ocean, ”said Roland Warner, a glaciologist at the University of Tasmania and lead author of the paper published in Geophysical Research Letters.

After the “disappearance” of the massive lake in Antarctica, a crater-like depression formed in its place – the so-called ice valley, covering about eleven square kilometers.

Hydraulic fracturing has been implicated in the collapse of several other small ice shelves in the Antarctic Peninsula, as meltwater forms on their surface during the local summer. However, scientists have never seen water escape through ice up to 1,400 meters thick, as in the case of Emery.

Although there are still many lakes and streams on the ice shelf, the amount of water lost this time was many times the amount it receives in a year. In addition, the destruction led to a change in the local landscape over an area of ​​60 square kilometers.

A new lake appeared from a small branch of the first lake in Antarctica: in a couple of days during the next melting season, it filled with water – more than a million cubic meters per day – and eventually poured out into the cavity of the valley. When the satellite again flew over the region a few days later, scientists were able to measure the channel 20 meters wide and three meters deep – even deeper than before.

It is too early to draw conclusions about what triggered the drainage of the lake, and to associate this with global trends such as climate change. Thanks to satellites, researchers want to understand how widespread such deep lakes are in Antarctica and what happens to them over time. “This sudden event appears to be the culmination of a decades-long process of accumulating and storing meltwater,” added Jonathan Kingslake, professor at Columbia University.

The future of the suddenly appeared valley is not yet known. It is likely that meltwater will continue to accumulate there, which will continue to flow into the ocean. All that remains is to observe. Scientists note that surface meltwater can ultimately cause the collapse of entire massive glaciers. This, in turn, leads to the rise of the level of the World Ocean.