How did the ancients transport 800-ton stone blocks for the construction of the podium in Baalbek?

Scholars believe that in 27 BC, the Roman Emperor Augustus decided to build absolutely and irrefutably the greatest, most powerful, and magnificent temple in the world and to do so, literally, in the middle of nowhere – in Baalbek.

The ruins of the Temple of Jupiter in Baalbek are massive, with a huge podium built on a wide platform that still has three huge walls. These retaining walls contain limestone blocks, larger than those that can be found anywhere around the world.

Each of the blocks weighs over 300 tons. However, there are also three blocks that weigh over 800 tons each. This trio gained worldwide fame and was called Trilithon.

The Temple of Jupiter is one of the most impressive ancient temples in the world. It measures 88 x 48 meters and stands on a platform (podium), with a wide staircase, which can also be described as truly monumental.

The actual podium rises 13 meters above the surrounding terrain. The trilithon in the retaining walls contains three of the largest stone blocks ever cut.

If events are viewed in the officially accepted academic framework given by history, the place chosen for the Temple of Jupiter makes no real sense.

Built on the remains of a more ancient construction in Baalbek?

No obvious reason can be found why Augustus chose the site in Baalbek for such a complex temple.

In Roman times, Baalbek was only a small town on a trade route to Damascus. It had no particular religious or cultural significance for Rome, except that it was at the center of the desired burial region, preferred by the local tribes.

Also, it seems completely uncharacteristic of the undeniably selfish Rome, which has tried to create such lavish and extravagant architecture in Lebanon, and in a place like Baalbek, which is so far from Rome.

The Romans were an extremely and undeniably greedy empire. They have appropriated historical treasures from other countries, such as the obelisks from Egypt and others. At the same time, the Temple of Jupiter was under construction.

It is much more logical to assume that Baalbek may have had something else that the Romans wanted from this place. Probably something no other place, not even Rome, could offer them. And also, what is the reason so many people wanted to be buried there?

Historians say that the temple is definitely and indisputably of Roman origin. However, there are serious problems with this statement.

An investigation of the blocks in the retaining wall of the Baalbek Temple shows very clearly that they are much more eroded than the Roman ruins of the Temple of Jupiter and the other two Roman temples, which can also be found on the site.

Since the stone on the retaining wall is of the same type as the Temple, it is reasonable and logical to assume that the heavily eroded blocks are much older.

Then, it is also logical to assume that the Roman temple was actually an upgrade of a much older existing platform.

This, of course, would also help explain why such a remote site was chosen for the construction of a temple. Namely, because it offered Augustus a ready-made, already existing platform on which to build it.

The archaeological community reacted, to put it mildly, with ridicule, to the idea that the construction of the platform and the retaining wall was earlier than the Temple.

However, the significant amount of erosion visible on the Trilithon blocks is quite adequately qualified as physical evidence of their older age than the actual ruins of the temple.

But scientists have a problem with this theory because it would mean that when the Romans built it, they did so on a platform that was previously built by a far more ancient civilization.

As you know, conventional archaeologists certainly do not want to raise the question of a “more ancient civilization”.

The Roman Empire is well known for being quite “selfish”, and yet nowhere in the Roman records is there any claim or mention of the construction of an incredible retaining wall.

There are still actual texts that reflect Roman transport capabilities during the reign of many Roman emperors, including Augustus.

These records clearly show that at the time, the load limit for transporting large blocks in the Roman Empire was just over 300 tons. And still, even this was hard to achieve.

For example, the famous transportation of the 323-ton Lateran obelisk to Rome was an extremely difficult and dangerous task involving the rule of three emperors.

And the transportation of the massive 800-ton blocks in Baalbek to the Temple of Jupiter is not mentioned in any of the Roman records. This fact also raises immediate questions.

It is worth noting that in the time of Augustus the Romans knew and often used concrete. The Colosseum in Rome is the perfect example of a classic Roman concrete structure.

Another fact is that it was never a Roman-style to build with megalithic blocks. In fact, such megalithic architecture did not appear anywhere else in the entire Roman Empire. It is also important that Ptolemys gave the “title” Heliopolis to Baalbek.

To give the place this special name, of course, Baalbek must have been an ancient holy place and already must have had some remarkable architecture or some significant connection with the other Heliopolis (City of the Sun) in Egypt.

According to local legends, Baalbek was a religious center dedicated to Baal in Phoenician times. Local Arab legends actually place the Cyclops blocks on the retaining wall at the time of Cain and Abel. Other myths say that the platform was built by the gods in ancient times.

Near the southern entrance of Baalbek, there is a quarry from which the stones used in the temples and retaining walls have been cut.

No traces can be found of any ancient road between the quarry and the Temple, which also raises questions about how the huge 800 tons of excavated monoliths were transported in one piece.

This lack of any path can only mean one of two things. Either the retaining wall blocks were transported so far back in antiquity that every trace of the road has long disappeared or a road was never needed for the task of transportation.

The basics of each time to be used for such a task would have to be really huge. And if such a path ever existed, some trace of it would have undoubtedly remained to this day. How were they moved then?

Three larger stone blocks have been discovered in the quarry near Вааlbеk. All three have been left there, perhaps because they were simply too massive to be transported.

The most famous is the Stone of the Pregnant Woman which has been measured to weigh about 1000 tons. For some time, it was the largest cut stone in the world but then an even larger one was found in the 90s. The estimates suggest it should be more than 1200 tons in weight.

And finally, in 2014, archaeologists discovered the largest stone block in the world, again in the same quarry near Вааlbеk. The monolith has been estimated to weigh between 1400 and 1650 tons but the exact number has not yet been revealed.

There is no crane in the modern world that can move such weights from the quarry to the site of the Temple. Such a task still goes far beyond our current transport capabilities and will likely remain a mystery in the future as well.

• Ghali, M. (2019, July 11). Mystery of the stones: How Lebanon’s Baalbek ruins are a site for the gods. Retrieved December 09, 2020, from https://www.middleeasteye.net/discover/baalbek-lebanon-ruins-tour 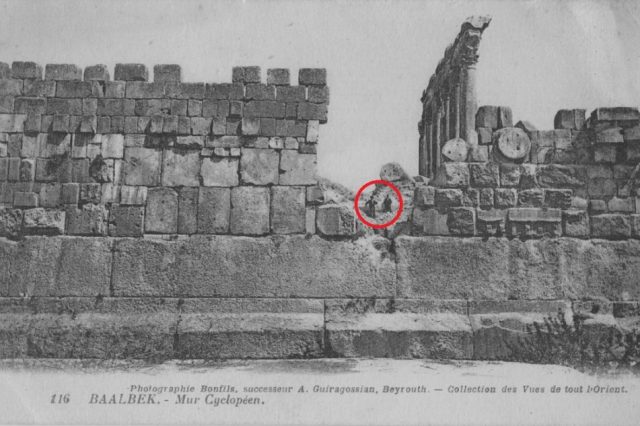 These Are Some of the Heaviest Stones Moved by Ancient Builders