New Horizons scientists puzzled by lack of a ‘light curve’ from their Kuiper Belt flyby target.

By January 2019, the spacecraft supposed to come relatively close to the object located in the Kuiper Belt.

As the spacecraft is approaching Ultima Thule, it is taking hundreds of images that have helped scientists measure the object’s brightness and ow it varies as the object rotates.

The new measurements have yielded the first mystery surrounding Ultima.

Even though scientists determined in 2017 that the enigmatic object isn’t shaped like a sphere – it’s most likely elongated or may even be two objects – they haven’t seen the repeated pulsations in brightness that you’d expect from a rotating object of that shape.

Scientists explain that the periodic variation in brightness during every rotation produces what scientists refer to as a light curve.

“I call this Ultima’s first puzzle – why does it have such a tiny light curve that we can’t even detect it? I expect the detailed flyby images coming soon to give us many more mysteries, but I did not expect this, and so soon.”

Why Ultima Thule lacks a light curve remains a mystery, although scientists have a few ideas.

“It’s possible that Ultima’s rotation pole is aimed right at or close to the spacecraft,” explained Marc Buie, also of the Southwest Research Institute.

That explanation is a natural, he added, although it requires the special circumstance of a particular orientation of Ultima.

“Another explanation,” said the SETI Institute’s Mark Showalter, “is that Ultima may be surrounded by a cloud of dust that obscures its light curve, much the way a comet’s coma often overwhelms the light reflected by its central nucleus.”

That explanation is plausible, Showalter added, but such a coma would require some source of heat to generate, and Ultima is too far away for the Sun’s feeble light to do the trick. So, what could possibly be heating it up?

“An even more bizarre scenario is one in which Ultima is surrounded by many tiny tumbling moons,” said University of Virginia’s Anne Verbiscer, a New Horizons assistant project scientist.

“If each moon has its own light curve, then together they could create a jumbled superposition of light curves that make it look to New Horizons like Ultima has a small light curve.” While that explanation is also plausible, she adds, it has no parallel in all the other bodies of our solar system.

So, what’s the answer?

“It’s hard to say which of these ideas is right,” Stern concluded.

“Perhaps it is even something we haven’t even thought of. In any case, we’ll get to the bottom of this puzzle soon – New Horizons will swoop over Ultima and take high-resolution images on Dec. 31 and Jan. 1, and the first of those images will be available on Earth just a day later. When we see those high–resolution images, we’ll know the answer to Ultima’s vexing, first puzzle. Stay tuned!”

While Exploring the Farthest Solar System’s Object Visited by Mankind, Unexpected Discoveries Were Made 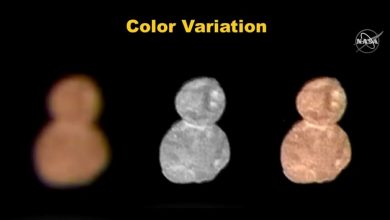 Enigmatic ‘Albedo’ Markings Spotted on the Most Distant Object Ever Explored