As it turns out, Earth can actually produce sounds, after being impacted by powerful solar storms.

If you paid attention a bit in school, you probably learned that in space, even if you tried screaming, nobody would hear you since sound cannot travel in a vacuum.

However, if we were to convert electromagnetic acridity into sounds, what we have is a pretty loud place.

Earth is no exception, particularly in and around the magnetic field produced by Earth’s molten core.

Dubbed the magnetosphere, this barrier is believed to be one of the vital parts for life to exist, protecting everything on Earth from the extremely hazardous solar wind.

As charged particles of the solar winds rush towards Earth, some of these are reflected from the shock region located in front of the magnetic field back towards the sun.

This backsplash is that interacts with the solar wind that’s still flowing in, causing instabilities in the plasma and hence creates magnetoacoustic waves.

On Earth, we are able to translate the magnetoacoustic waves into sounds we can hear. What we get is strange chirps and whistles, almost as if we were listening to some sort of sci-fi movie theme. But these strange sounds help scientists better understand the intricate dynamics of interactions between the solar wind and the planet’s magnetosphere.

Recently, researchers have revealed what they call the very first of our planet and the Sun, recorded during a solar storm.

This was achieved with spacecraft orbiting our planet. Collectively known as the Cluster mission, these spacecraft are operated by the European Space Agency. They managed to essentially record the results of six solar storms, specifically the foreshock, a region upstream of Earth’s bow shock, an area where the solar wind first lashes against the planet’s magnetosphere.

The data gathered by the Cluster Mission resulted in sounds. The audio files of the electromagnetic waves have shown that the waves produced by solar storms are far more complex than initially thought.

Speaking about the data obtained, Lucile Turc of the University of Helsinki in Finland explained: “Our study reveals that solar storms profoundly modify the foreshock region. It’s like the storm is changing the tuning of the foreshock.”

The sound obtained from the data gathered by ESA’s spacecraft revealed that our planet’s magnetosphere is rarely quiet. The Sun interacts always with Earth and other planets. As particles and radiation are emitted from the sun, they travel and reach Earth, producing a kind of calm solar weather sound.

However, during Solar Storms, when massive magnetic eruptions take place on the Sun’s Surface, sending charged particles hurtling towards space, things get a lot more dramatic, as the video below will show:

Scientists have revealed that during normal space weather, our planet’s magnetosphere creates low-frequency waves that are essentially dominated by a singular frequency. However, during solar storms, things change abruptly: the pressure of the solar wind pushes the frequency of the waves to a much higher note.

Experts have further discovered that a great deal of the high-frequency waves are superposed within a complex network, and not just one dominating frequency.

This was unexpected the researchers have revealed.

“We always expected a change in frequency, but not the level of complexity in the wave,” Turc explained. Scientists are currently working to figure out how the series of complex waves superpositions occur. Their discoveries have been published in the Journal Geophysical Research Letters.

It Turns Out Earth’s Atmosphere is Ringing Like A Bell 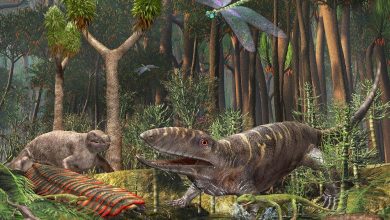 Did You Know? Insects As Big As a Modern-Day Car Used To Roam Planet Earth Freely

As You Read This, Earth Is Traveling Through the Remnants of Dead Stars