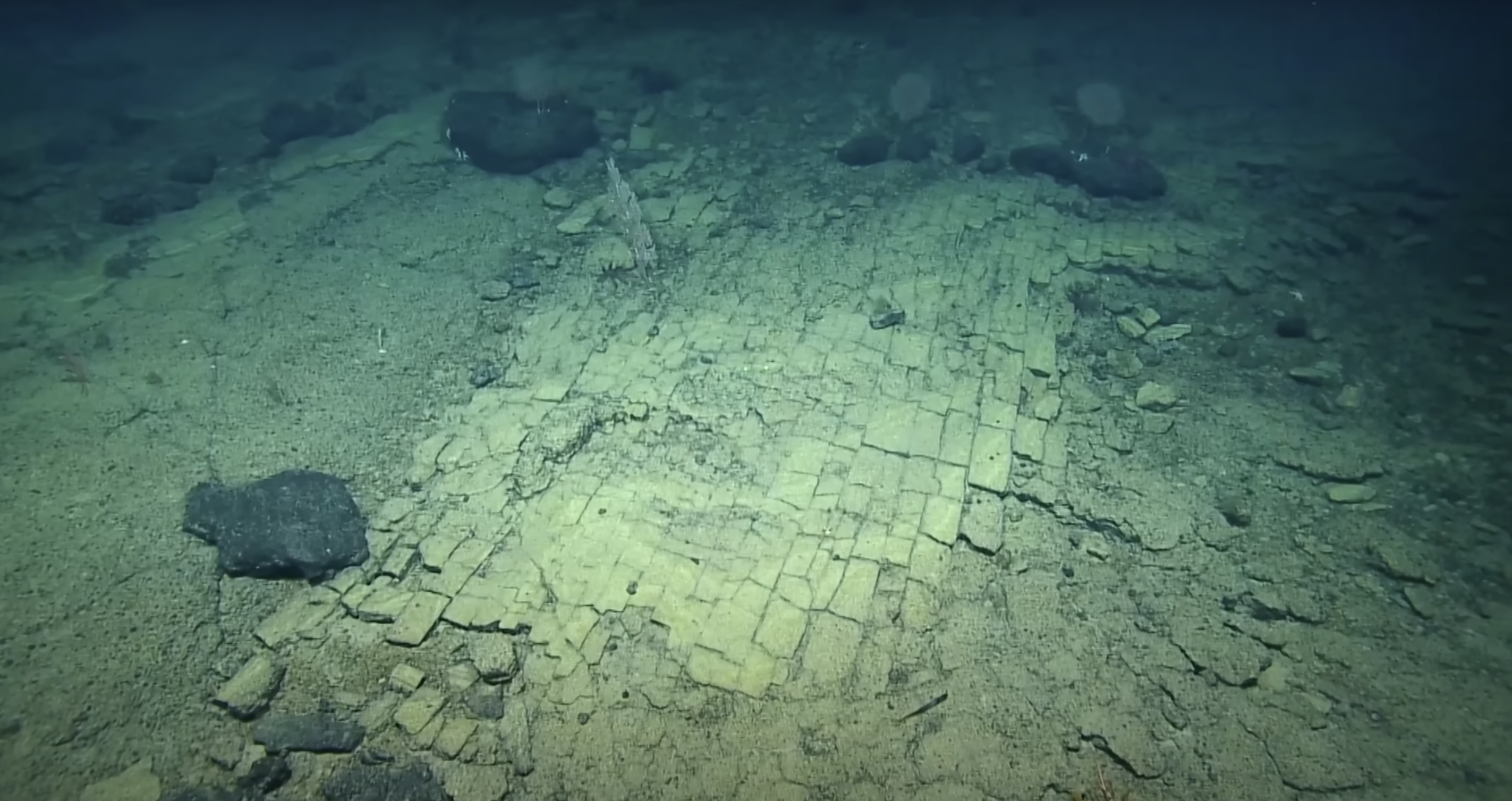 Curious 90-degree fractures have been revealed at the bottom of the Pacific Ocean.

An expedition to a seamount just north of the Hawaiian Islands has revealed an ancient dry lakebed paved with what looks like a “yellow brick road.”

Is this the road to Atlantis? Is this something you’d expect to find in the depths of the Pacific Ocean?

It is not Atlantis, and it is no road despite an incredible resemblance to one.

The mind-boggling scene was revealed by chance by the Nautilus survey vessel, which is currently studying the Liliʻuokalani Ridge within the Papahānaumokuākea Marine National Monument (PMNM).

The PMNM is one of the largest marine conservation areas in the world, larger than all the national parks in the United States combined.

Take into consideration that we’ve only explored about 3 percent of its seafloor.

As revealed by Nautilus Live, a “dry lake bed” formation was seen at the summit of Nootka Seamount; this was later identified as a fractured flow of hyaloclastite rock (a volcanic rock formed from high-energy eruptions in which many rock fragments settle to the seafloor).

Researchers explain that the curious 90-degree fractures were probably created by heating and cooling stress due to multiple eruptions on this baked margin.

The expedition revealed more incredible features along the way.

Researchers also collected samples of basalt crusts covered in ferromanganese from various depths and oxygen saturations across the seamount chain and a pumice rock that almost resembled a sponge.

The discovery of the curious “Yellow Brick Road” and experts’ reactions can be seen in a video uploaded by the Ocean Exploration Trust.

Atlantis, it is not you

“It’s the way to Atlantis,” a researcher can be heard exclaiming on the radio. “The yellow brick road?” another voice replied. “This is weird,” another team member added. “Are you kidding? This is crazy.”

While the reactions of the team members are certainly expected, this isn’t Atlantis.

The lake bed discovered by the researchers at the top of the Nootka seamount appears surprisingly dry.

Over the radio, the team members discuss that the ground looks almost like a “baked crust” that can be peeled off. In a small section, the volcanic rock has fractured in a way that looks a lot like bricks.

But in a way, we can probably say that Nautilus is taking us on a journey to parts of our planet we’ve never seen before.

Some of these parts are extraordinary, some are strange, and some parts, like the curious “yellow brick road,” may resemble actual roads built by long-lost civilizations.

Humans have never explored, mapped, or even seen more than 80 percent of the ocean. More of the surface of the Moon and Mars have been mapped and studied than the ocean floor of our own planet.