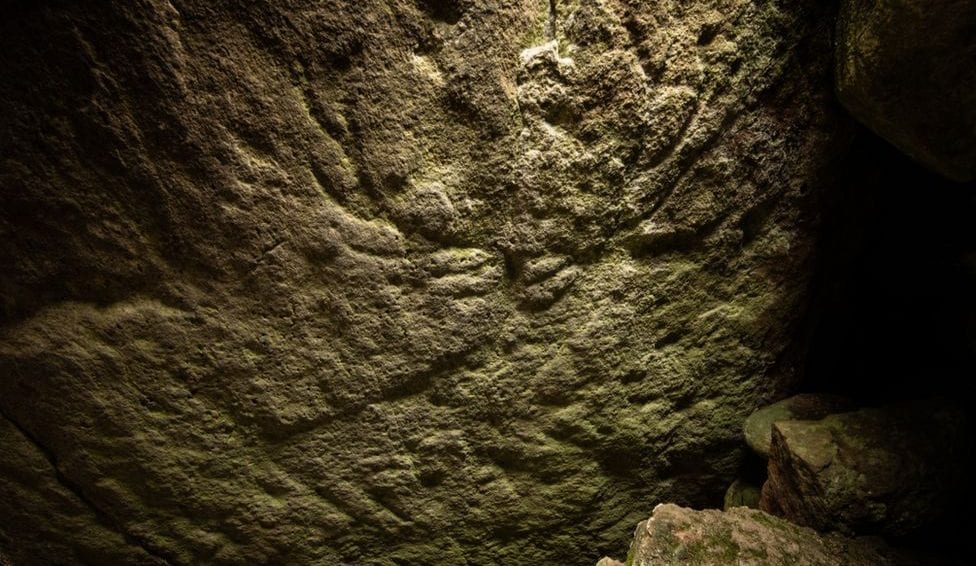 Experts believe that the animal carvings are between 4,000 and 5,000 years old.

An amateur archaeologist accidentally saw rock carvings оn the ceiling of the burial chamber of the Neolithic burial mound of Dunchraigaig Cairn in West Scotland. After that, experts examined the stone slab covering the niche and found five carvings of animals, and among them – drawings of red deer that have never been found in Scotland before.

1. The Kilmartin Glen area in Argyll in the west of Scotland is known for a large number of Neolithic and Bronze Age archaeological sites. About 800 of them are described within a radius of six miles from the village of Kilmartin. Among the most ancient are menhirs (vertical stones) and cists (burials in stone boxes).

2. An extensive collection of Neolithic and Bronze Age cave paintings has also been found at Kilmartin Glen. These are mainly geometric symbols, among which concentric ornaments, called “cups and rings”, are especially famous.

3. To the southwest of the village of Kilmartin there is a linear burial ground with a burial ceremony under the cairn mounds made of stones. Only five burial mounds have survived to this day, although traces in the fields indicate that there were many more.

4. A little away from the “linear” burial ground is the Dunchraigaig Cairn stone mound. Three burial chambers, the so-called stone boxes, were found under an embankment with a diameter of 30 meters. One of the graves was buried in the ground, lined with stone slabs using dry masonry, and covered from above with a large 3.5-meter stone.

5. During excavations in the 1860s, the remains of 10 people were found in it, buried according to the rites of cremation and corpse placement, as well as stone tools and a winepress.

6. HES rock art specialist Tertia Barnett spoke about the discovery of a rare Neolithic rock art accidentally found on a slab in the Dankreigeig burial mound. It was noticed by amateur archaeologist Hamish Fenton, who directed a flashlight beam at the stone vault of the burial chamber in the evening.

8. The deer have details of the body and horns of an adult animal, which makes the figures extremely recognizable and realistic.

9. Researchers consider the find to be the first deer rock carvings in Scotland. The rock carvings were scanned with structured light to produce a virtual replica with details and details invisible to the eye.

10. Scientists have to determine the time of the creation of the petroglyphs (preliminary dating: 4000–5000 years) and check if there is a similar painting in other stone burials.

By following this link, you can see a complete 3D model of the cairn.