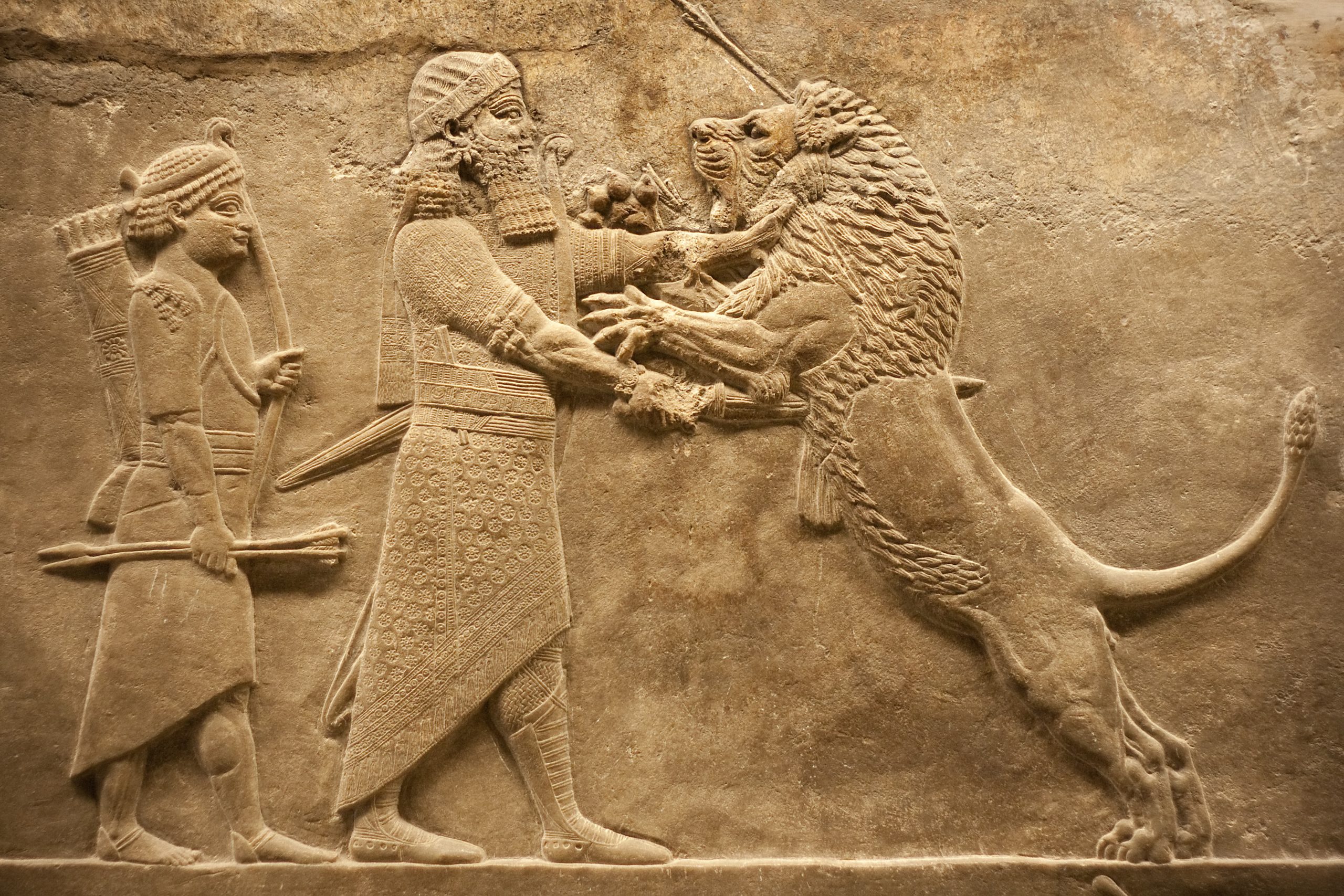 Many ancient Assyrian cities have been excavated throughout history, but historians have given only a few their due attention.

Their empire lasted over 500 years and was known for its military might and cultural influence on many peoples in the Middle East and beyond. An Assyrian city is a city that an Assyrian builds in the area of modern-day Iraq and Syria.

The Assyrians were a people who lived from around 2500 BCE to 605 BCE. They made many cities and empires, including Nineveh, Ashur, Nimrud, and Dur-Sharrukin. These cities are still standing today, some more than 5,000 years after they were first built.

Ashur was the capital of ancient Assyria and is located in northern Iraq. King Assur-natsir-pal II founded it on the banks of the Tigris River in 884 BC as one of several new cities he had built to help him expand his empire.

The city was founded on a large platform that measured 300x300m and 20m high and was surrounded by a thick wall. The walls were ornamented with stone sculptures and reliefs that depicted Ashur’s victories over his enemies, including lions attacking people.

The city also had a palace made of mudbricks covered with plaster, and rooms decorated with stone slabs depicting lions attacking bulls and other animals. This was a common theme among Assyrian palaces at this time.

Nimrud, also known as Calah or Kalhu, is one of the best-preserved cities from ancient Assyria. The city was built by King Shalmaneser I (1274-1245 BC) and was occupied for about 300 years. The town was an important center for trade and religion. It contained palaces, temples, ziggurats, and fortifications.

The site of Nimrud was discovered in 1845 by Sir Austen Henry Layard. It was excavated in the 1950s and 1960s by archaeologists from England’s University of London Institute of Archaeology.

Excavations revealed many artifacts, including statues and other art pieces made from bronze and stone; cylinder seals; cuneiform texts; jewelry such as rings, necklaces, and earrings; weapons like daggers; and tools such as bowls, dishes, and plates made from clay pottery.

The best-preserved section dates back to King Ashurnasirpal II (883-859 BC).

The ancient city of Nineveh (Iraq) was the capital of Assyria from 612 BCE to 605 BCE before being replaced by Calah. The town was built on a triangular plain at the confluence of the Tigris River and the Greater Zab River, covering about 100 acres.

The archaeological site has been excavated since 1845 and is now one of the most necessary excavations in Iraq. Excavations started in 1845 and have continued to this day. Archaeologists have uncovered remains that date back to 4000 BCE.

Nineveh was once considered the largest city in the world. The city’s population reached a maximum of 100,000 inhabitants during the reign of Ashurbanipal (668-627 BC). Nineveh contains some of the most fascinating cities of ancient Assyria and hundreds of other ruins excavated over time (including Urartu).

The city of Khorsabad is located in Iraq, on the banks of the Tigris River. King Sargon II built it in 717 BC. In 612 BC, King Nabopolassar destroyed the town.

King Sargon II built the city with a great organization. Specifically, with large squares for military training, palaces for kings and queens, temples for worshiping gods and goddesses, gardens for growing different types of plants and flowers, etc.

Accordingly, many things make this city one of the best excavations of Assyrian cities. The palaces’ decorations with beautiful statues and reliefs were the main characteristic. Many gardens filled with rare plants from all over the world. Also, people built water reservoirs to help provide enough water during times of drought. Finally, the King built areas where people could practice different activities like sports or even dance!

The city was excavated by Victor Place in 1843-44, followed by Paul Soleillet in 1852-1854. The site has been looted many times over the years; however, most of the finds from Khorsabad have been taken to museums worldwide, such as the British Museum in London or the Louvre in Paris.

The city of Kuyunjik was the capital of Assyria, located in northern Iraq. English archaeologist Sir Austen Henry Layard excavated the town in the 19th century. Similarly to the rest, it’s one of the best excavations of Assyrian villages and one of the most fascinating cities of ancient Assyria.

Firstly, people built the city on a mound, surrounding it by a wall with gates on its four sides. Equally important are the several palaces, temples, and other buildings are inside, as archaeologists have found in recent years.

Additionally, the most famous palace is the “Palace without Rival,” or “Nebi Yunus” palace. King Sargon II (721-705 BC) built the Palace. It contains a magnificent staircase of stone blocks decorated with reliefs depicting heroes fighting dragons (similar to those found in contemporary Greek temples). As well as another interesting structure, which is is the “Great Temple.” Again, that’s where archaeologists found many cuneiform tablets written in different texts, including laws and religious rituals.

Arbela, known today as the city of Erbil in Iraq, was the capital of the Assyrian empire from 744 to 610 BCE. Thus, it’s one of the oldest continuously occupied cities in the world. Also, archaeologists have found evidence of habitation dating back as far as 6800 BCE.

Further, its location along trade routes made it a prosperous city, but it also meant Arbela was vulnerable to attack. Babylonians and Medes sacked Arbela before Alexander the Great conquered it in 331 BCE.

Today, archaeologists are still excavating at Arbela and unearthing many treasures from its past. Furthermore, some of those include an inscription by King Sennacherib (704-681 BCE) that describes his siege on Jerusalem during his reign as king. Then, King Esarhaddon (680-669 BCE) built a circular ziggurat temple. Moreover, they also produced an Aramaic tablet containing a letter written by King Cyrus (558-530 BCE).

Nuzi was a small ancient Assyrian Empire city located about 50 km northeast of Kirkuk, Iraq. It possesses well-preserved records of business transactions in the late third millennium BCE. The archaeology of Nuzi has been an ongoing process since 1954 by teams from the Oriental Institute of the University of Chicago and other institutions. The site covers more than 4 hectares and contains the remains of single-room structures built with mud bricks on stone foundations.

Nuzi’s location is in the Kurdish region of Iran. Then, people lived in the city for about 2,000 years, from 3000 BCE to 1700 BCE. Primarily the first German archaeologist, Robert Koldewey, who excavated the city, worked in 1906 and 1907.

The records of Nuzi’s economy are among the best preservations from the ancient Near East. The economy was based on surplus production and labor-intensive manufacturing, supported by large-scale irrigation projects for agriculture and herding.

Ashgabat is the capital city of Turkmenistan and one of the most ancient Assyrian cities in the world. 5000 BC is when nomadic tribes established it as a place to settle down. Archaeologists have excavated the city. Accordingly, people know it for re-creating an ancient Assyrian palace with a replica of a ziggurat or pyramid.

The city is tiny in comparison to others on this list (it only has about 750,000 residents). Nonetheless, it’s worth seeing if you’re ever in Turkmenistan!

Russian archaeologists excavated Ashgabat in the 1930s. However, modern buildings have covered the place. Thus, it’s impossible to see the ancient Assyrian cities in and of themselves. In addition, the Ashgabat Archaeological Museum hosts many artifacts from this site.

Tell Fekheryeh is a binding site. Its location is in Upper Khabur Valley, in the northeastern part of Syria. A French team excavated the site. Jean-Claude Doumet-Serhal was the leader. This is one of the most interesting cities of ancient Assyria.

People founded the city around 1500 BC and destroyed it by a fire around 1300 BC. Furthermore, the city had an area of about 0.5 hectares (1 acre).

In addition, Tell Fekheryeh was a trade center for many different items such as ivory, precious stones, textiles, and gold. They were coming from Egypt, Mesopotamia, and other ancient Assyrian cities. Specifically, people were importing other types of goods into Tell Fekheryeh from other countries. Examples include copper from Anatolia, tin from Iran, and silver from Oman. Also, glass beads from Egypt, pearls from Bahrain or the Persian Gulf, and wine from Cyprus.

Dur Sharrukin – the Capital of the Neo-Assyrian Empire

The city of Dur Sharrukin is one of the most fascinating ancient Assyrian cities. Sargon II, the king of Assyria, built it from 722 to 705 BC. People called him “the great king” and “the mighty king.”

There are many interesting facts about this city. The city is in the present-day Khorsabad district of Iraq, not far from Mosul. This district is Nineveh plains.

Hence, Sargon II chose the location of this city because he wanted it to be close to his capital city. The name “Dur Sharrukin” means “Fortress of Sargon” in the Akkadian language (ancient Assyrian language). Additionally, This name refers to the fact that he wanted his city to be like a fortress for him so that nobody could defeat him and take over his kingdom.

In addition to its strategic position, Dur Sharrukin also had more fertile land around it than other ancient Assyrian cities, making agriculture more profitable for its residents; therefore, they could grow crops without difficulty or worry about food supplies during times of famine or drought.