A Japanese astronomer recorded a bright flash on Jupiter, which was probably the result of the collision of an unknown space object with the planet.

Astronomers captured two flashes on Jupiter in just over a month

Тhe first to announce the unusual phenomenon was a Japanese amateur astronomer known on Twitter under the nickname yotsuyubi21. He photographed a flare in Jupiter’s North Tropical Zone, which is believed to be a shock flare from the impact of an unknown space object on the surface of this planet.

The news about the impact was received by the scientific community with great interest and attention, since something similar happened on September 13, 2021. Back then, multiple astronomers from different locations around the world managed to film the impact at the same time.

A new impact on Jupiter?

Surprisingly, a new impact on Jupiter was recorded just a month after the previous hit. Now the received images are undergoing an independent evaluation procedure. Apparently, the object that hit the planet this time was smaller because the flash it caused was insignificant when compared to the one from last month.

If the hypothesis of a new impact on Jupiter is confirmed, then this will only be the 11th recorded impact of a comet or asteroid on a gas giant since 1994. That year, fragments of comet Shoemaker-Levy 9 crashed into Jupiter. The 1994 event was predicted, so it was watched by all professional observatories in the world.

Confirmed by other observers

In this case, the discovery was made almost by accident. By the way, following the aforementioned amateur astronomer, pictures of a bright flash on the planet were published by a group of astronomers led by Ko Arimatsu from Kyoto University (Japan) that further confirmed the event.

Researchers say the most recent outbreak occurred in the upper layers of Jupiter’s clouds. The event was confirmed by observations made with PONCOTS instruments as part of the Organized Automatic Telescopes for Investigation of Random Events (OASES) project.

How long was the flash?

The Arimatsu team has confirmed that the impact on Jupiter occurred in the North Tropical Zone of the planet. According to the video, which was also recorded in automatic mode, the flash lasted for about four seconds. From the description, it follows that it appeared suddenly, burned brightly for about two seconds, and then quickly disappeared.

Objects falling on the gas giant

According to some estimates, an average of 6.5 objects 10 meters in diameter or more fall on the gas giant annually, that is, large enough to be detected by amateur astronomers. Other data suggests that objects around 50 meters in diameter could be falling on the planet once every few months. The problem is that it is difficult to catch these impacts even with the most sophisticated monitoring system.

Sometimes, such an impact on Jupiter leaves a debris field that can be monitored in subsequent observations. The previous case from September did not leave traces and it is unlikely that the impact from October 15th, which was smaller, would leave anything either. 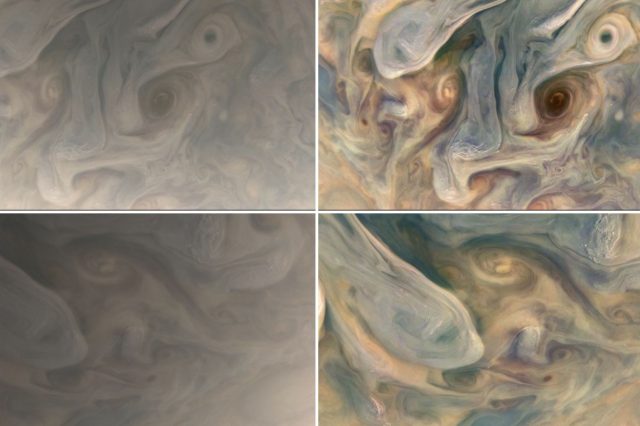