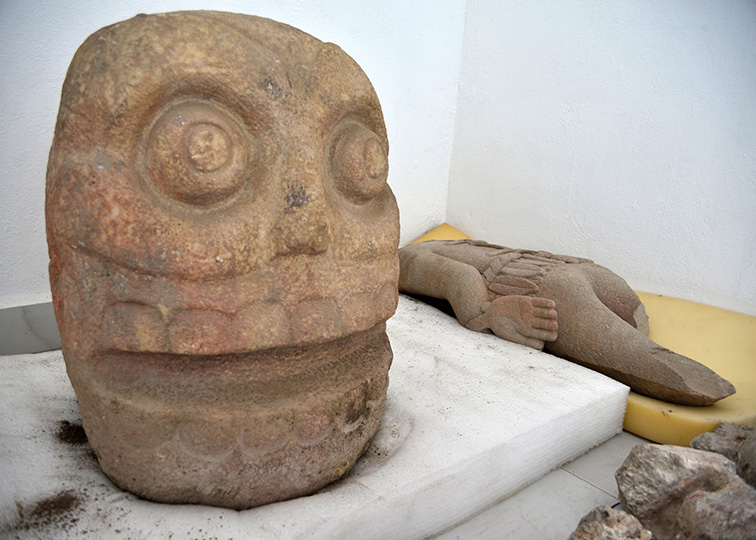 Mexican Archaeologists have discovered the temple of the Flayed Lord, an ancient structure where priests ‘wore the skin of the dead’ after sacrificing them in terrifying ancient rituals.

As explained by the National Institute of Anthropology and History of Mexico (INAH), the archeological discovery was made during excavations at the Popoloca Indian ruins ‘Ndachjian-Tehuacán’ in Puebla.

During excavations, archaeologists discovered a pair of mysterious skull-like carvings believed to have been used as ‘containers’ where priests would place the skin of people after the gruesome rituals. Experts also came across an ancient stone statue believed to depict the god Xipe Totec, a life-death-rebirth deity, god of agriculture, vegetation, the east, disease, spring, goldsmiths, silversmiths, liberation and the seasons.

The two stone skulls are around 70 centimeters tall and weigh around 200 kilograms. The stone heads are made out of volcanic rock.

It is believed that the Popolocas erected the ancient temple between 1000 and 1260 A.D., and were later conquered by the Aztecs, according to Archaeologist Noemí Castillo Tejero, director of the Southern Project of the State of Puebla Popoloca Central Area.

Archaeologists note that the discovery is of great importance as depictions of Xipe Totec had been found in previous archaeological excavations, but never have experts discovered an entire temple dedicated to the life-death-rebirth deity.

During archaeological excavations, researchers from the National Institute of Anthropology and History discovered two sacrificial altars, three stone sculpture and a plethora of different archaeological elements in the pyramid basement of the Archaeological Zone of Ndachjian-Tehuacán.

As explained by INAH, this is the first temple specifically dedicated to Xipe Totec discovered anywhere in the country.

It also confirms that Xipe Totec ( which translates to’our lord the flayed’) was one of the most significant deities of the pre-Hispanic era.