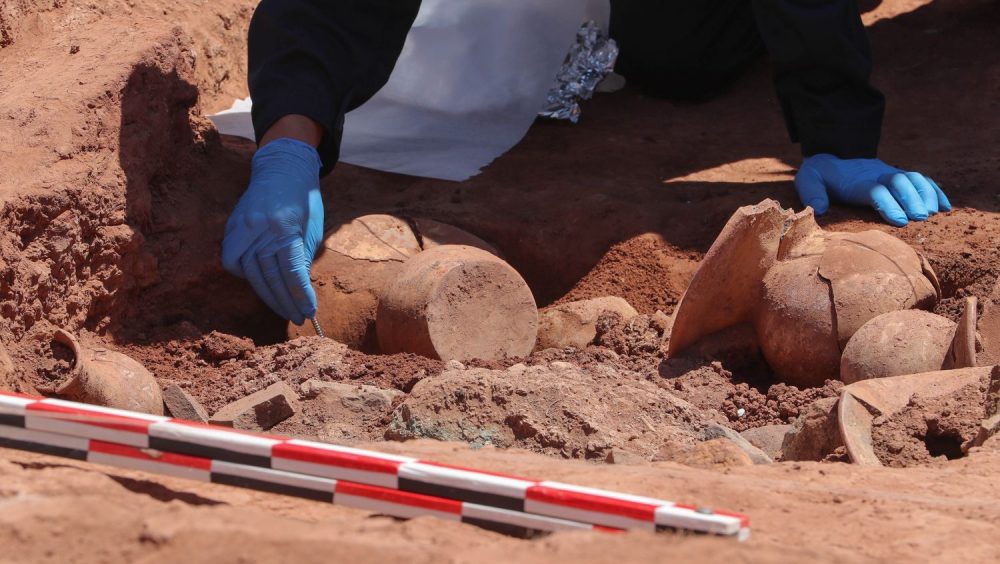 Archaeologists say the discovery promises to rewrite the history of the site.

An archaeological discovery inside an ancient temple at Tiahuanaco promises to “rewrite history” and authorities hope to discover “a funeral of an important Tiahuanaco ruler” soon.

Archaeologists have discovered 17 ceremonial vessels, dated between 300 and 600 after A.D., in a temple of the pre-Hispanic citadel of Tiahuanaco, in the Bolivian Altiplano, not far from the mysterious ruins of Puma Punku. The discovery, researchers reveal, opens a new page in the history of that site.

The new artifacts were excavated in September of 2019, inside Tiahuanaco’s Kalasasaya temple, not far from the Ponce Monolith; one of the three monuments within the temple complex.

The Kalasasaya is about 120 by 130 meters in dimension and aligned to the cardinal directions. Like the other platform mounds within Tiwanaku, it has a central sunken court.

The archeologists who participated in the recovery of the artifacts, which began on September 18, say they could be part of a burial offering to an important person of the Tiahuanaco ruling elite.

“Inside one of the vessels, we found coal, a sign of a ritual process. As we move forward in the investigation we can confirm whether it is finally a burial,” said Julio Condori, director of the Center for Archaeological, Anthropological Research and Administration of Tiahuanaco (CIAAAT).

The rest of the artifacts will be secured later, since “they need other procedures for their exhibition”, according to Condori. In addition to coal, the remains of fish and bones of Taruca have been found in the vessels. Taruca is a species of deer originating in the Andes. All of the artifacts are tell-tale signs that experts are looking at an act of ceremonial nature.

The Kalasasaya has always been believed to be a ceremonial temple in nature. The location and disposition of the offering tell us a lot. Probably, if we keep going down we will find a funeral of an important individual,” Miguel López Calleja, an assistant to archeology at CIAAAT, told EFE. The researchers say that the discovery will help “confirm many things about Tiahuanaco and rewrite a new history of what Kalasasaya is.

Now that the artifacts have been excavated, researchers will proceed to study them in the laboratory, in order to find out the exact age when they were buried beneath the surface.

In archeology, we first use the visual methodology consisting of iconography and form. From there we see that the artifacts date back between 300 and 600 AD. In two or three weeks, applying radiocarbon dating, we will know the exact date of the burial, Condori revealed in an interview with EFE.

“The objective of these excavations was to find evidence of a platform in the temple that had been displaced and this finding has been fortuitous,” López Calleja acknowledged.

Located about 70 kilometers from La Paz, Tiahuanaco was the capital of the former pre-Hispanic empire of the same name.

Tiahuanaco was formed as a small village around 1580 BC, but grew to be an imperial state in 724 after Christ and declined about 1187 of our era, according to some Bolivian researchers.

In the citadel, there are still lithic monuments such as Kalasasaya, the semi-subterranean Temple, sculptures of its hierarchs, the Puerta del Sol and the remains of military and civil palaces. Not far from Tiahuanaco are the ancient ruins of Puma Punku, home to some of the most intricate stones in the Bolivian Andes.