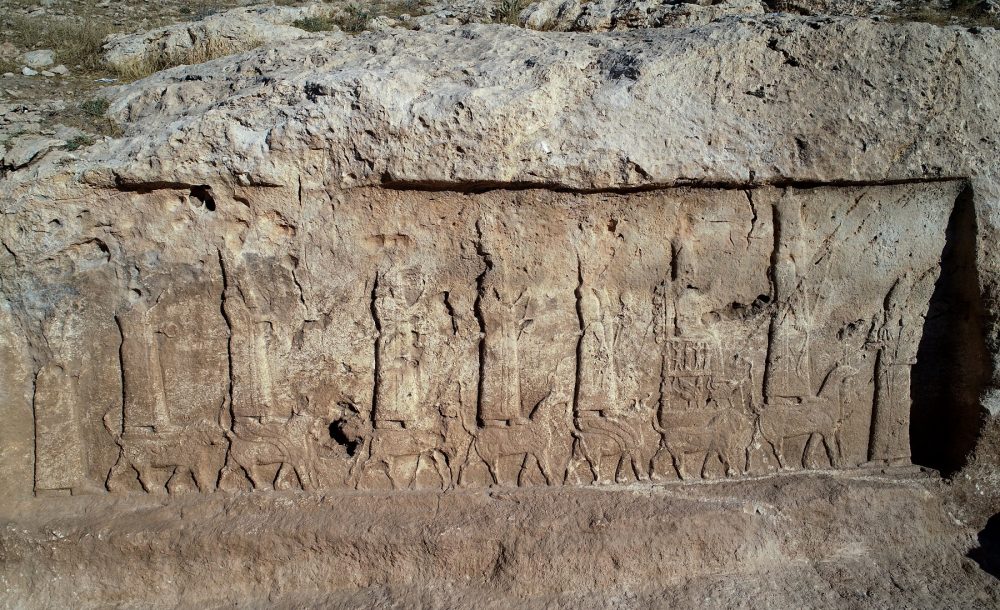 A joint archaeological mission from the Kurdish-Italian Faida Archaeological project has made a surprising discovery coming across ancient rock reliefs depicting the ruler and the great gods of ancient Assyria.

An international group of archaeologists from the Kurdish-Italian Faida Archaeological project has made an extraordinary discovery in Iraq while excavating in northern Iraq in September and October of 2019.

The archaeological mission has revealed stone panels engraved onto a sophisticated system of canals, with images of a ruler and several deities belonging to ancient Assyria.

Located in an archeological site in the Faida district of the Duhok region near the border with Turkey, the group of researchers came across as many as 10 imposing rocky reliefs dating back to the 7th and 8th centuries B.C. carved on the walls of a canal built on a hill approximately 7 kilometers long and 4 wide, which is currently – almost entirely – under the eroded deposits of its slopes.

The Faida canal, fed by a system of karst springs, was probably excavated by the Assyrian ruler Sargon (720-705 BC) at the base of a hill. Today, the canal, which has an average width of 4 m, is almost completely buried under thick layers of soil deposited by the erosion of the hillside.

As revealed by experts from the Unversyi of Udine and the Duhok Department of Antiquities, this construction would have been carried out when the territory was under the rule of the Assyrian king Sargon II. The murals expose the king’s figure followed by a procession of a series of gods over their symbolic animals, depicting “the Assyrian ruler Sargon in the presence of divinity.”

Under the rule of Sargon II, the Assyrians defeated the Kingdom of Israel, capturing Samaria after a siege of three years and exiling the residents. Eventually, scholars say that this event became the very basis of the legends of the Ten Lost Tribes.

This archaeological discovery is quite remarkable experts have revealed, since such reliefs are found within royal palaces, and shed light on public works supported by the most important founder of the dynasty of Assyrian rulers, best known for their military prowess.

Among the numerous deities, the experts say the figure of Ashur stands out. Assur was the most prominent deity of the Assyrian pantheon, represented on a dragon and a lion, and his wife Mullissu, sitting on an elaborate throne held by a lion.

Ashur–also Assur, Aššur–was a deified form of the city of Assur, which dates from the mid-3rd millennium BC and was the capital of the Old Assyrian Empire. Interestingly, it has been claimed that Ashur was represented on many occasions as the winged sun which is popular in Assyrian iconography.

Regrettably, experts point out that this unique archeological discovery is today part of a post-war scenario, which is threatened by vandalism, clandestine excavations and the expansion of a nearby town and productive activities.

It is expected that, upon completion of the excavation and restoration work on the site, the site will be turned into an archaeological site, and the researchers expect the complex will be listed as a UNESCO World Heritage site.

The group of archaeologists intend to make new discoveries during their excavation campaign in 2020 and apply for the site to be included in the UNESCO World Heritage Sites, Il Giornale Dell’Arte said.