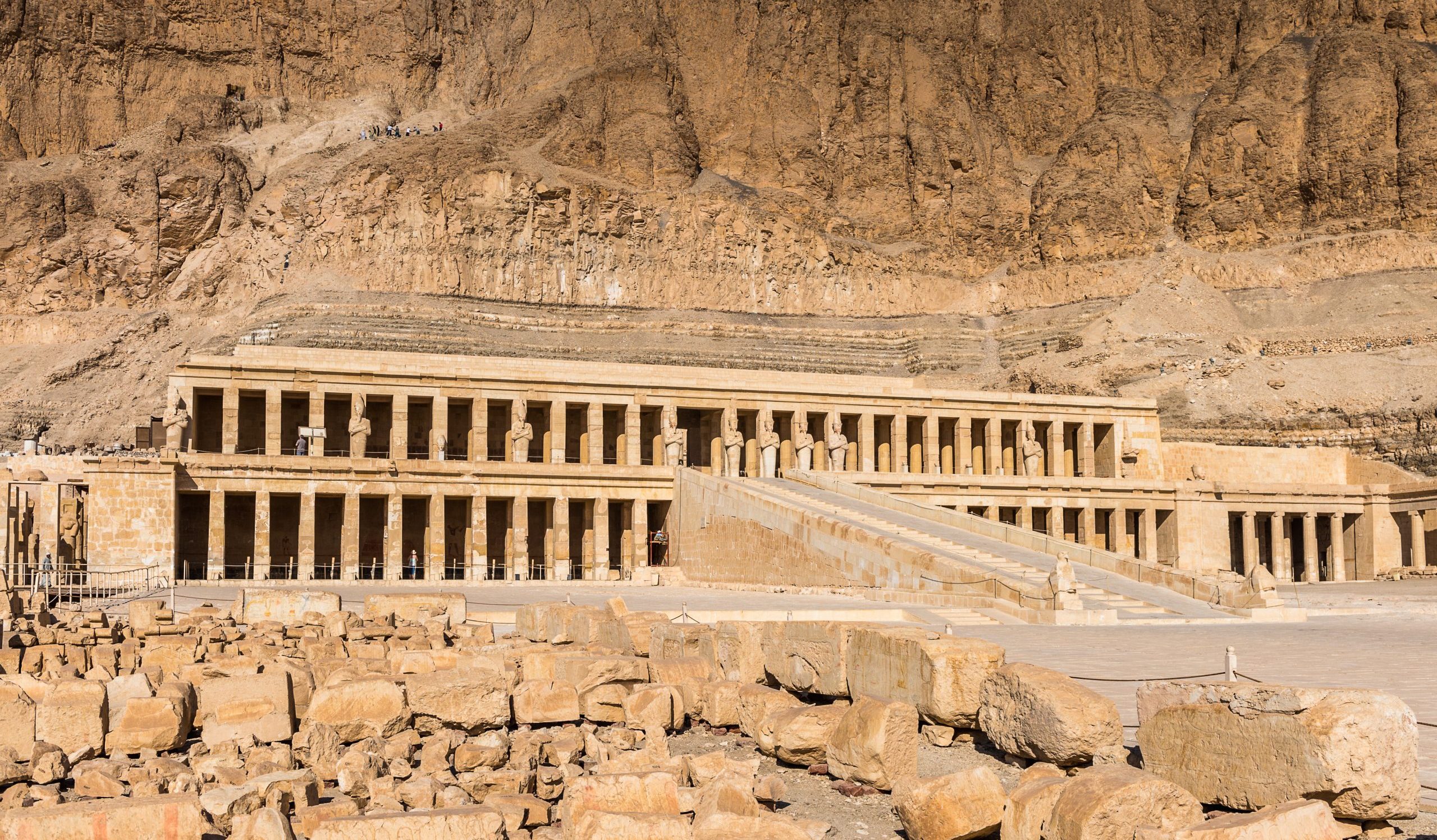 New methods of analysis helped archaeologists solve a long-standing secret of the ancient Egyptian masters - it turned out that the wall paintings in the Chapel of Hatshepsut were created by whole "teams", and not by individual artists and sculptors, and many of the artisans were amateurs.

Through studying the unfinished images found on the walls of tombs and temples, Egyptologists are currently re-creating the process for the creation of Egyptian polychrome reliefs. At the start, the surface of the wall was carefully leveled and covered with a layer of plaster – a mixture of lime and finely sifted gypsum. A marking was applied to it along the perimeter of the wall, along which the red lines of the auxiliary grid were applied with the help of a stretched cord.

A sketch of the future relief was also transferred to the wall in red along with the cells of this grid from the sample. Such samples of the details of the planned composition were usually painted on ceramic ostracon, smooth limestone tiles, or sometimes on papyrus. Then the artist, using black paint, corrected the sketch. After finalizing the images and inscriptions, the relief was cut out and painted.

From private letters found during excavations of the settlement of the builders of the royal tombs of Deir el-Medina (Theban necropolis), it is known that during the construction and decoration of the tomb, its space was divided into two symmetrical halves. Each of them was processed by separate teams of workers and artists, who are referred to in the texts as “those on the left” and “those on the right”. Egyptologists believe that the construction of temples was organized in a similar way.

However, the details of the workflow are still poorly understood. This is especially true of buildings in which the interior decoration was completed entirely, since each subsequent stage of finishing destroyed traces of preparatory work. A striking example of such a structure is the temple of the female pharaoh of the 18th dynasty – Hatshepsut (1473-1458 BC).

The Temple of Hatshepsut

The sanctuary stands on the western bank of the Nile, opposite the Karnak temple complex, in the Deir el-Bahri gorge, which from ancient times was part of the sacred landscape in the Thebes region. The temple consists of three tiers with covered halls, porticoes, and terraces. The lower level of the temple was connected to the Nile bank by a paved processional road, and ramps, which had a single axis with the road, led to the second and third terraces.

Painted reliefs adorning the porticoes and inner halls of Jeser Jeseru are considered a masterpiece of ancient Egyptian fine art. The portico of the lower terrace is decorated with scenes glorifying the military power and deeds of Pharaoh Maatkar (this was the throne name of Hatshepsut): trampling on the enemies of Egypt, offerings to the gods, and construction work.

On the second tier, images are dedicated to the legitimization of the status of Hatshepsut, who came to power as a usurper, a successful military-trade expedition to the country of Punt, as well as the cults of Hathor and Anubis, whose chapels are located to the left and right of the colonnade.

On the upper tier behind the portico is the courtyard with the entrance to the rocky sanctuary of Amun, and on either side of it are chapels dedicated to the solar deity (on the right, that is, on the north side) and the cults of the queen herself and her father Pharaoh Thutmose I (on the left, on the south side).

The Chapel of Hatshepsut: how were the reliefs created?

Anastasiia Stupko-Lubczynska from the Center for Mediterranean Archeology at the University of Warsaw examined the reliefs of the Chapel of Hatshepsut in search of traces that can tell about the organization of the finishing work. Polish archaeologists have been exploring the Deir el Bahri temple since 1961.

In 2006, they embarked on a long-term project to document and theoretically reconstruct the images in the royal chapel. Based on the collected material, Dr. Stupko-Lubczynska compared the details of the reliefs that adorn its side (northern and southern) walls. On the north wall, the researcher discovered the remains of a red auxiliary grid and reconstructed the markings of its lines.

The Chapel of Hatshepsut is the largest indoor space in the complex (its area is almost 69 square meters). Its northern and southern walls, measuring about 13.26 meters in length and 3.78 meters in height, are occupied by canonical scenes of the offering of gifts. In the western part of the walls, farthest from the entrance, there were images of Hatshepsut in the image of a pharaoh. Later, during the destruction of the cult of the queen-usurper, they were shot down.

The rest of the reliefs are occupied by processions of bearers of gifts and texts with a list of these offerings. On both walls, 100 people are participating in the procession. However, they are distributed in three rows (or, as the Egyptologists say, registers) which are not the same: 32, 32, and 36 figures on the south wall and 32, 30, and 38 figures on the north, if you count from top to bottom.

Work was done by two different “teams” of artists

Stupko-Lubczynska managed to find differences showing that two independent groups of artists really worked on the decoration of the walls of the chapel – just like in the tombs. This is evidenced by the differences in the depiction of objects of the same type. For example, on the southern wall, bundles of ears are carved only along the contour, and ritual vessels for offering sacrificial milk are depicted in the form of ceramic jugs suspended from a rope. All spikelets in bundles are made in relief on the northern wall, and vessels with milk are suspended on metal arms.

Due to the high relief height, it was impossible to do without scaffolding: a person standing on the floor can only access the lower register of the procession. Using scaffolding, carvers could cut the wall along the entire height at the same time, changing places if necessary (for example, in cases where the intervention of a more experienced craftsman was required).

The researcher also identified subtle differences in the quality of the artists’ work. Thus, on the southern wall, the carved image of chicks carried by one of the participants in the procession, apparently, was carried out by the insufficiently skillful hand of a student. At the same time, the master, it seems, was working next to him: this is evidenced by a skillfully carved vessel with a lid in the form of a recumbent calf, hanging in a net at the bend of the arm of a neighboring figure.

There was also a difference in the technique of applying the inscriptions accompanying each bearer of the gifts. On the south wall, they are made in the same manner as the images and are of high quality. On the opposite side of the chapel, many of the inscriptions are simply carved into the already completed background field. Stupko-Lubczyńska suggested that here the wall space was for a long time inaccessible to the hieroglyph carver.

A master and an apprentice

It turned out that in approximately the same places where the hieroglyphs are cut on the finished background, figures with wigs sharply differing in the level of performance are adjacent to each other. Probably, the trainee sculptor either worked alongside a highly qualified master and under his guidance, or tried to complete the laborious element of the relief begun by the teacher.

The most difficult and responsible work – the image of the face – was obviously undertaken by experienced artists. Beginners were entrusted with simpler details, but mistakes still happened. Stupko-Lubczynska found traces of adjustments to the already cut and painted relief. Such edits are localized in the area of ​​the trunk and legs of human figures.

Significance of the research

Egyptian art, closely associated with the cult practice, was limited by the rigid framework of the pictorial canon. If, when painting private tombs, artists could afford to deviate from it, then in buildings of state importance – temples, royal tombs – it is almost impossible to find any author’s features. Chapel of Hatshepsut is no exception; all images here are strictly canonical and close in technique.

Therefore, attempts to diagnose in them the individual style of individual artists, following the example of successful attribution of works of European art, as noted by the Polish researcher, are futile. However, exploring small differences can be helpful in reconstructing some of the details of the workflow and teaching methodology for young artists. 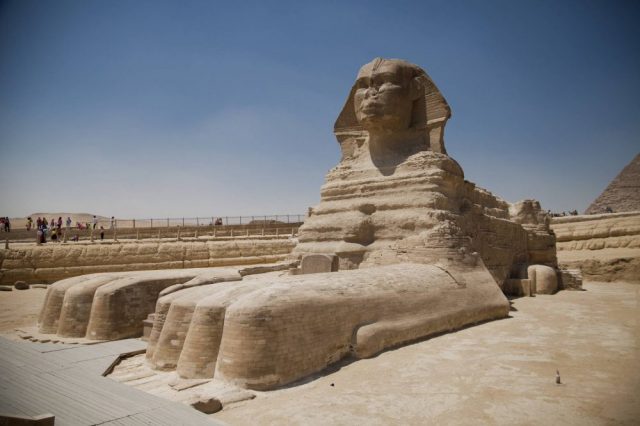 Unwritten Mystery: Why Do Statues of Egyptian Pharaohs Have Broken Noses?