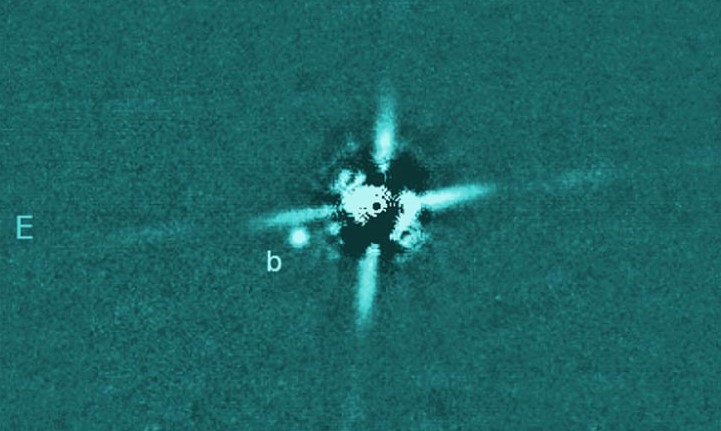 Scientists have taken a snapshot of a young exoplanet which was formed no more than five million years ago and is still extremely hot.

A team of scientists led by the University of Hawaii at Manoa (USA) announced the discovery of a new super-Jupiter-type exoplanet candidate through direct observation.

The celestial body is three to five times more massive than the largest planet in the solar system – Jupiter.

According to astronomers, its properties do not fit into the current models of planet formation.

The method of direct observation of exoplanets is the most spectacular among the methods for studying such objects, but it has become available relatively recently. Not that we knew about exoplanets a long time ago but this method requires the use of the most modern telescopes and radiation receivers.

Most often, this method is used to study giant exoplanets in wide orbits around young stars, since they are still hot enough to be visible in the infrared range. Such observations make it possible to test models of exoplanet formation, such as accretion onto a solid core or fragmentation of a protoplanetary disk.

A group of astronomers led by Eric Gaidos from the University of Hawaii at Manoa announced the discovery of a young exoplanet candidate called 2M0437b using direct observations of the red dwarf 2MASS J04372171 + 2651014, located in the star-forming region of the constellation Taurus.

According to scientists, 2M0437b formed about two to five million years ago (recall that our Earth is about 4.5 billion years old). The planet has a very elongated orbit and is located 100 times farther from its star than the Earth is from the Sun. The observations were carried out in the infrared range using telescopes of the Keck Observatory and Subaru, equipped with adaptive optics.

Comparison of the luminosity of the newly discovered object with models suggests a mass of 3-5 masses of Jupiter, which is well below the limit of the burning of deuterium, which means that it is not a brown dwarf, but, most likely, a young exoplanet of the super-Jupiter type. Its effective temperature is estimated at 1400-1500 Kelvin.

2M0437b became one of the youngest candidates for exoplanets, which was observed directly. This is especially important because astronomers now have the opportunity to observe it over the years and learn more about how planets age. It will go in the long list of exoplanets that are to be observed with the new James Webb Space Telescope that will allow astronomers to get direct images of distant objects by eliminating the traditional difficulties.

A young exoplanet that does not fit the known models

Last but not least, the young exoplanet does not fit into the models of planet formation due to the accretion of disk matter onto the core (due to the youth of the system) or due to gravitational instability in the protoplanetary disk (due to the large mass of the planet).