Astronomers have revealed they may just have discovered what is considered the smallest dwarf planet in the solar system. To be officially seen as such, a cosmic body must meet four requirements to the International Astronomical Union.

The cosmic body must orbit the sun; but not a planet. It can’t have cleared the neighborhood of its orbit. It must have enough mass to have attained a hydrostatic equilibrium, meaning it is more or less round-ish in shape.

As it turns out, our solar system is a huge cosmic playground and there are many cosmic bodies inside it that happen to meet the first three requirements. But new observations have revealed that there’s a cosmic body within the asteroid belt located between the orbit of Mars and Jupiter which may meet all four requirements, and its called Hygiea. This cosmic body is the fourth-largest asteroid inside the belt just behind dwarf planet Ceres which has a diameter of 945 kilometers, or 587 miles, and asteroids Vesta and Pallas, 525 (326) and 512 kilometers (318 miles) in diameter.

Previous observations didn’t reveal much about Hygiea. The object was poorly studied and even less understood. Astronomers initially thought the object was an oblong piece of rock with an approximate diameter of 350 by 500 kilometers.

But astronomical observations using the Very Large Telescope‘s SPHERE image have revealed a  more precise diameter and shape of the object, suggesting it is more spherical in nature than initially thought, which is consistent with it being in hydrostatic equilibrium and therefore meeting all four requirements to be considered a dwarf planet.

The new observations have revealed Hygiea has a diameter of around 430 kilometers.

“Thanks to the unique capability of the SPHERE instrument on the VLT, which is one of the most powerful imaging systems in the world, we could resolve Hygiea’s shape, which turns out to be nearly spherical,” explained astronomer Pierre Vernazza from the Laboratoire d’Astrophysique de Marseille in France. “Thanks to these images, Hygiea may be reclassified as a dwarf planet, so far the smallest in the Solar System.”

The new observations have further revealed and confirmed that Hygiea’s surface composition is similar to that of Ceres, both having a low density as well. But the new SPHERE observations revealed a curious thing: the lack of an impact crater.

This is odd since there are approximately 7,000 smaller asteroids of similar composition sharing Hygeia’s orbit, which is the largest body in the group, the reason why scientists call it the Hygiea family of asteroids.

The new dwarf planet and its accompanying asteroids are thought to have formed some 2 billion years ago when a massive impact sent debris from Hygiea flying into an asteroid swarm. Curiously, astronomers say that a similar phenomenon happened to Vesta which gave birth to the Vesta family of asteroids. Vesta has a lot of impact craters to show off, however.

New observations of Hygiea revealed a curious detail: astronomers only discovered two unambiguous impact craters on the surface of the dwarf planet, incomparable to those craters found on Vesta.

“Neither of these two craters could have been caused by the impact that originated the Hygiea family of asteroids, whose volume is comparable to that of a 100 km-sized object. They are too small,” explained astronomer Miroslav Brož of the Astronomical Institute of Charles University in the Czech Republic.

To understand Hygiea’s shape, astronomers performed a number of computer simulations coming up with an eventual scenario that produced a cosmic body with a shape like that of Hygiea and its family of asteroids.

The researchers say that some 2 billion years ago, a cosmic body with an average diameter between 75 and 150 kilometers in diameter slammed into a massive piece of rock. The massive rock was pulverized, sending out bits of debris through space.

However, the main mass of molten hot pieces founds its way back together and as the material cooled and hardened, ir formed a nearly perfect shape like the one we see today.

If this theory is correct, and this is how Hygiea really formed, it would represent the only-known such collision in the solar system.

Whatever the case, Hygiea has proven to be an extremely interesting cosmic body. It is officially designated a dwarf planet, and as such has broadened the range of sizes at which these objects are found. It also may just be the smallest body inside our solar system that has achieved hydrostatic equilibrium.

The existence of Hygiea suggests that there could be many more dwarf planes within our solar system than what we initially thought. Now that Hygiea is considered a Dwarf planet, it has taken the frown from Ceres as the smallest dwarf planet in the solar system.

Pluto the most famous of dwarf planets in our solar system has a diameter close to 2,400 kilometers, which makes Hygiea a really small cosmic companion.

Here’s How Uranus Ended up Lopsided 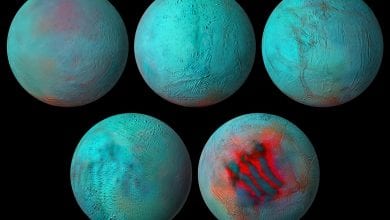 10 Places in the Solar System Where Life Could Exist

10 Things That Will Happen As Our Sun Starts “Going Supernova”