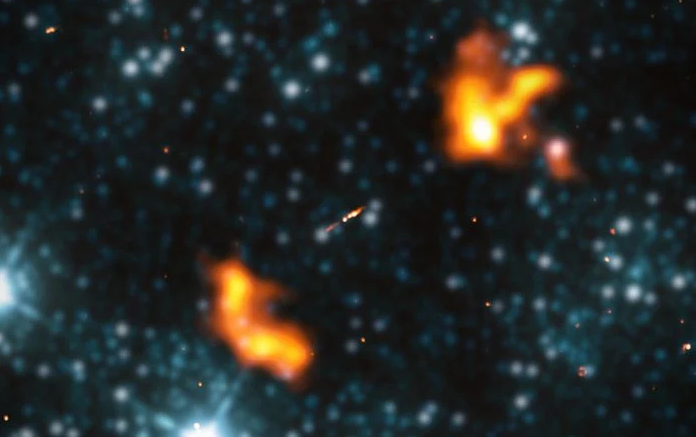 Named Alcyoneus - after one of the giants of Greek mythology - this gigantic galaxy spans 5 megaparsecs, or 16.3 million light-years in length.

Located about 3 billion light-years from Earth, Alcyoneus is what is known as a radio galaxy, so named because the energy that comes from it is mainly emitted in the radio wave range by synchrotron radiation.

Thus, it consists of a host galaxy – a cluster of stars orbiting a core containing a supermassive black hole – and giant jets and radio clouds; the latter accelerate electrons that generate radio emissions. The central black hole, estimated at about 400 million solar masses, is the source of the observed plasma jets.

What are plasma jets?

These huge ultra-fast jets are relatively common in space. Active black holes in the center of galaxies do not absorb all the surrounding matter: some of it is sent to the poles of the accretion disk, where it is ejected in the form of jets at tremendous speeds.

They can travel long distances, eventually forming what are known as radio lobes, which they continue to feed over time. But in some cases, this phenomenon leads to the formation of giant radio galaxies several megaparsecs long. The physical mechanisms that support this extreme growth are not yet fully understood.

How big do radio galaxies get?

Some radio galaxies can actually reach more than 100 times the diameter of the host galaxy! Therefore, scientists are trying to determine whether there are certain features of the host galaxies or specific large-scale environments that favor the growth of giant radio galaxies; the discovery of Alcyoneus as the largest radio galaxy ever discovered is an excellent object to study.

” As an extreme example of its class, Alcyoneus may shed light on the underlying mechanisms governing the growth of radio galaxies.”

By studying the characteristics of the host galaxy Alcyoneus, the researchers hope to discover the key elements and conditions necessary for the development of such galaxies.

What do we know about Alcyoneus?

Examining the LOFAR data – with careful elimination of all radio sources that could interfere with the waves emitted by the radio beams – they discovered Alcyoneus, which they describe as the largest known galactic structure, with an estimated size of at least 5 megaparsecs, or more than 16 million light-years.

By comparison, Messier 87, another giant radio galaxy in the Virgo Cluster, is estimated to be almost a million light-years across. The data show that the host galaxy has an elliptical shape, a stellar mass of about 2.4 x 1011 solar masses, and a supermassive black hole of about 4 x 108 solar masses at its center.

Martijn Oey, an astronomer at the Leiden Observatory in the Netherlands, and his collaborators note, however, that Alcyoneus and its host galaxy seem “suspiciously ordinary”: total low-frequency luminosity density (about 8 x 1025 W/Hz), stellar mass, and the mass of the supermassive black holes are increasingly lower, although close, to the values ​​usually observed for this type of galaxy.

For comparison, the mass of M87 is about 1012 solar masses, and the mass of M87* – the supermassive black hole at its center – is estimated at about 6.5 billion solar masses. Thus, it appears that the growth of giant galaxies does not require very massive galaxies or central black holes, as well as high power radio emissions, the researchers add.

On the other hand, the low density of the environment remains a possible explanation. In addition, the host galaxy is located in a filament of the cosmic web, with which it can have significant thermodynamic interaction. The fact that Alcyoneus is located in a region of low-density space and/or its interaction with the intergalactic medium may be the key to its disproportionate expansion.

According to the researchers, the calculated pressure in the lobes (on the order of 5 x 10-16 Pa) is the lowest found so far; therefore, Alcyoneus represents “the most promising radio galaxy to date for the study of the hot intergalactic medium.” While the team has not yet been able to determine the exact reason for its expansion, they believe it is still expanding.