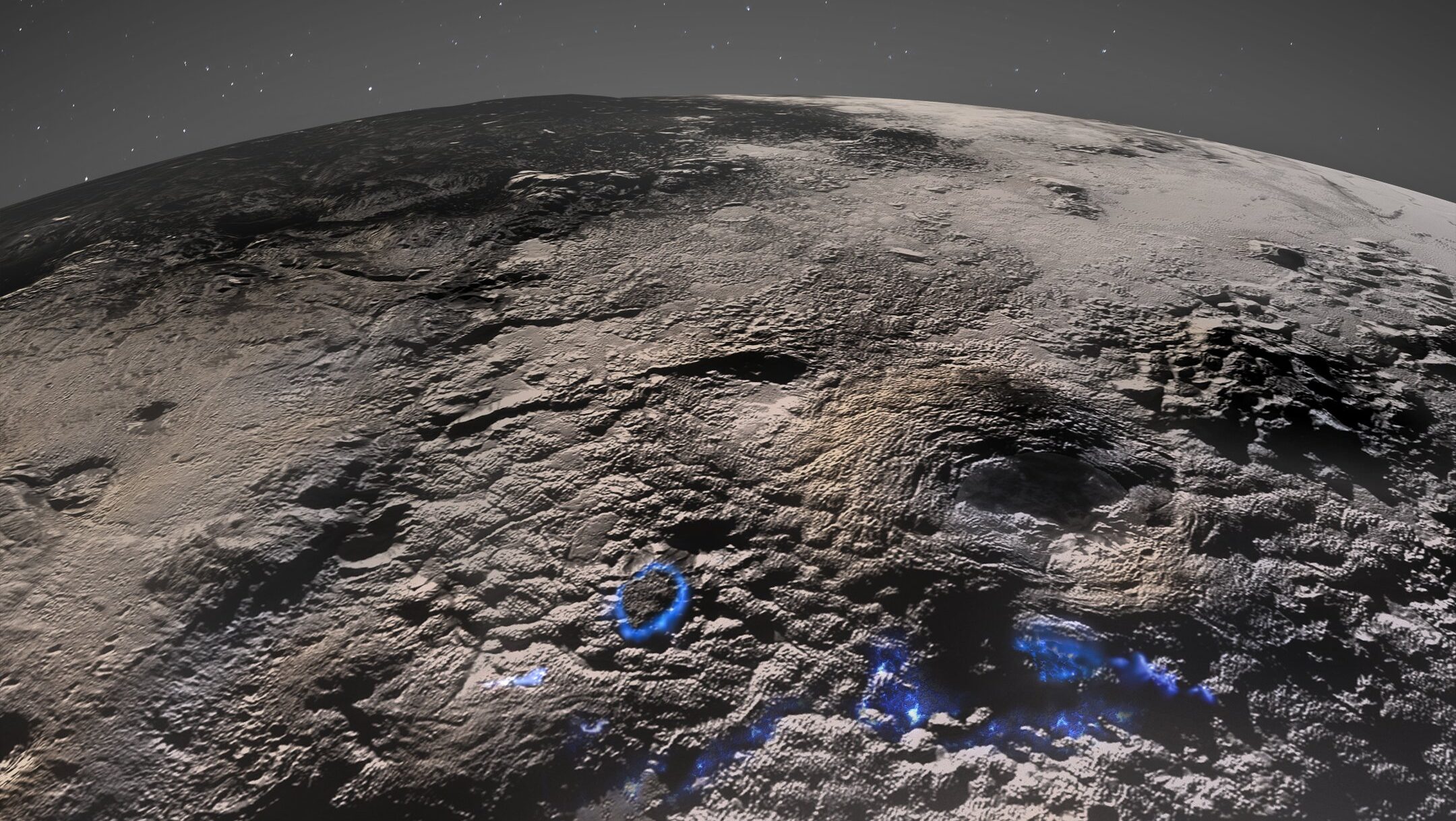 Scientists suspect that ice volcanoes on Pluto may still be active today.

Data from the New Horizons automatic station confirmed that Pluto’s Wright Mons and Piccard Mons are indeed the result of cryovolcanism, and not erosion or normal uplift. It is assumed that several large subsurface ice volcanoes participated in their creation, and Pluto itself retained heat in its depths longer than previously thought.

Oceans and Cryovolcanism on Pluto

The surface of Pluto, the largest object in the Kuiper Belt, shows a very diverse morphology, which suggests that it has been subjected to intense and constant renewal through endogenous and exogenous processes.

It is assumed that the outer layer of the dwarf planet, about 300 kilometers thick, is rich in water ice, and a water ocean may still exist at the base of the ice shell.

The typical surface temperature of Pluto is 35-60 Kelvin, under such conditions, pure water ice should form immobile bedrock, but impurities of ammonia or salts can reduce the melting point of ice.

In addition, the melting point of nitrogen ice (63 kelvin) allows it to be more dynamic than water ice, such as flowing slowly.

Another important process associated with ice and capable of influencing the relief of Pluto is considered to be cryovolcanism. Previously, in images taken by the New Horizons automatic station, scientists have already found candidates for the largest cryovolcanoes in the solar system.

However, it is not known when they were active, and what the features of the course of cryovolcanism are on Pluto.

Ice Volcanoes on Pluto may still be active

A team of planetary scientists led by Kelsi Singer of the Southwest Research Institute has published the results of an analysis of New Horizons images of Pluto, which refer to a region of suspected cryovolcanic landscapes southwest of the Sputnik Planitia. Scientists wanted to study the mechanisms that formed this area and date it.

The most noticeable structures in the cryovolcanic region were large uplifts separated by wide depressions. Two of them, similar to volcanoes, with deep central depressions, received the designations Wright Mons and Piccard Mons.

The central depression of Wright Mons has a diameter of 40-50 kilometers and an approximate depth of 4 kilometers. The central depression of Piccard Mons is larger than that of Wright Mons and has a more rounded or “U” profile. It does not look like the calderas of Earth or Martian volcanoes, and its walls have a lumpy structure, like the outer boundaries.

The slopes of Wright Mons and much of the surrounding landscape, including the nearby highlands, have an undulating and/or bumpy structure, with wave sizes varying from a few kilometers to 20 kilometers across.

Scientists did not find obvious signs of directed flows that could be erupted by cryovolcanoes, obvious traces of explosive volcanism, or local sources of eruptions in the images, however, they came to the conclusion that the central depressions could not be formed due to the usual collapse of mountain peaks, and traces of cryovolcanism could be erased from time.

The rarity of craters on Wright Mons indicates its relatively young age, with an upper limit of 1–2 billion years. The surface contains nitrogen, methane, and water ice, as well as dark organic matter represented by tholins.

The researchers concluded that the observed uplifts were formed as a result of the deposition of matter on the surface of the planet through cryovolcanism and are not remnants of mountain erosion or structures created by uplift.

Geological features in the Wright Mons region are morphologically unlike any other regions of Pluto, and also have very little in common with most landscapes on other bodies in the solar system.

It is assumed that there was a sequential mechanism for the formation of all large uplifts and depressions, during which several subsurface sources of cryolava were involved, pouring out a total of more than a thousand cubic kilometers of matter, and some uplifts could merge together.